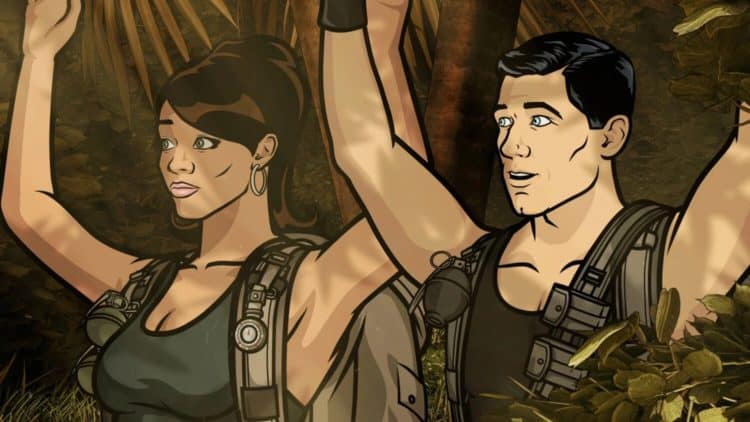 Thus far, Sterling Archer, Malory, Lana, Pam, and the rest of the gang have made us laugh, cry, and question our sanity throughout all twelve seasons of the popular animated show, Archer. The zany antics and personal relationships clearly come first in the world of covert black ops and espionage on the show, but we wouldn’t love Archer if these guys were actually competent and good at their jobs. This list will highlight the top five characters of the popular FX show. The article will only focus on the main characters, so guest names such as Keegan Michael Key and JK Simmons are exempt.

The world’s deadliest spy is essentially what most men want to be. An extremely narcissistic, arrogant, insensitive, sex-crazed douchebag with mommy issues. Despite all the negative flaws regarding Archer, it’s his clear dynamic with each of the cast members that really makes him pop. His on/off sexual relationship Lana is often sweet, and it helps balance out all the garbage he usually displays throughout the episode. His constant battles with his mother, to his belittling of Cyril can also result in some mean-spirited fun; however, when the show introduced a kid into Archer’s life then we finally started to see our loveable man-child grow as each season passed by. Sterling is easily the most developed character throughout the show, but despite some big changes, the writers have wisely found a way to keep the core traits of what makes Archer funny while still evolving him throughout.

Rest in peace to legendary actress Jessica Walter. The Archer mainstay has provided laughs in all forms of media, most notably in Arrested Development as well. However, it isn’t just the fact that Walter is essentially perfect as the vain, selfish, and sometimes questionable mother tactics of the former Chief Executive Officer of ISIS, it’s her dry wit and continuous snark with most of the cast that makes her such a joy to watch. While you perfectly understand why Sterling isn’t exactly fond of his mother, we know that both he and Mallory love each other, and the show does an excellent job of showcasing the love/hate relationship between mother and son. However, Mallory’s occasional racism, overprotection for Sterling’s granddaughter, and few showcases of her going out of her way to defend Sterling and the team helped balance out the hilarious supporting character. Though Mallory has ridden off into the sunset with Ron, her antics and presence will never be forgotten.

The kicka** accountant with a minor sex issue is pretty much the butt of jokes for Sterling and the gang. However, Cyril’s dynamic with Lana and Sterling is easily one of the funnier running gags. It was always obvious that Lana was into Sterling from the beginning, but the show coming up with hilarious ways for Cyril to somehow screw-up his chance with Lana does provide several laugh-out-loud moments. Despite mostly being there for ridicule and humiliation, Cyril is also the heart of the entire gang. Though he often lacks confidence, there’s plenty of moments that showcased Cyril’s growth as a human being and his mini victories over Sterling can be rewarding. Out of everyone’s story on Archer, Cyril’s backstory is actually quite sad and despite the constant mocking of serious real-life conditions such as his inability to truly love, his relapse, or Malory’s continuing to emasculate him, Archer has never been shied away from jokes of this nature, which helps the show standout even more.

This soon-to-be evil scientist who has the ability to speak fluent English, German, and Portuguese provoke some of the show’s most awkward moments throughout the season. The funny running gag is that though Krieger is labeled as a medical doctor, he doesn’t have any sort of medical degree to back up his odd practices. Given the fact that Kreiger was raised by a former Nazi scientist until the age of 15, it’s understandable how the former head of the ISIS Applied Research Department boarders on being evil. Kreiger’s best moments often come from jokes in regard to his odd experiments such as the half-man, half-pig creature named Pigley or numerous cyborgs/robotic clones, though another running gag about his hot anime virtual girlfriend always provides a nice laugh every time she’s onscreen.

The sassy former Human Resources Director at ISIS is the type of friend that isn’t afraid to hold back when it comes to honestly, but often lacks self-awareness in numerous situations. Pam is essentially the foul-mouthed assistant with a few sets of skills that would actually make her a competent field agent. Pam’s addiction to cocaine and food has provided several awkward, but hilarious moments, which more often than not involve sex in some type of manner. However, it isn’t just her abrasive attitude that gains a few laughs on the series, as the show has done a great job of often tapping into the insecurities of most of these characters. This allows us to connect with these fun characters, but whether Pam is sipping on margaritas or having kinky fun with Yakuza gangsters, her wild zingers and personality are what make the Archer dynamic so fun.