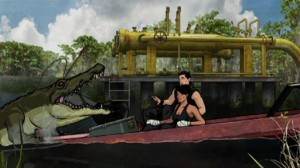 One of the best way to get to know characters is to isolate them in the swampy Louisiana wilderness on a pig launcher (which isn’t what it sounds like).

In tonight’s Archer, Archer and Lana are tasked with protecting a natural gas pipeline in Louisiana from an ecoterrorist named Gandalf. Meanwhile, the ISIS drones struggle to cope with conserving energy for a green tax credit.

Archer’s obsession with Burt Reynolds, particularly from Gator, was taken a step further as he gleefully steels an airboat so that he and Lana can trek deeper into the swamp. He even dons a vest and brandishes a bow a la Reynolds in Deliverance. He also sheds his usual his extraordinarily mean-but-still charming persona to just simply selfish and buzzed. He even, only after several beers, confides his biggest fears in Lana. These fears happen to be gator-related.

We also learn, in a trend I hope will continue, a little bit of Lana’s backstory. She was once an extreme environmentalist who was hired by Mallory because she wouldn’t back down from a gun in her face. If the teaser for next week’s episode is any indication, this trend will indeed continue with Woodhouse’s backstory.

Archer seems to have refined its formula to perfection. The ingredients are all there: slapstick humor, pop culture references, subtle dialogue gags and joke repetition. “Pipeline Fever” saw that perfection finally happen. Archer has certainly hit its stride.