Home
Television
The Boys
The Boys: “The Last Time to Look On This World of Lies” Recap 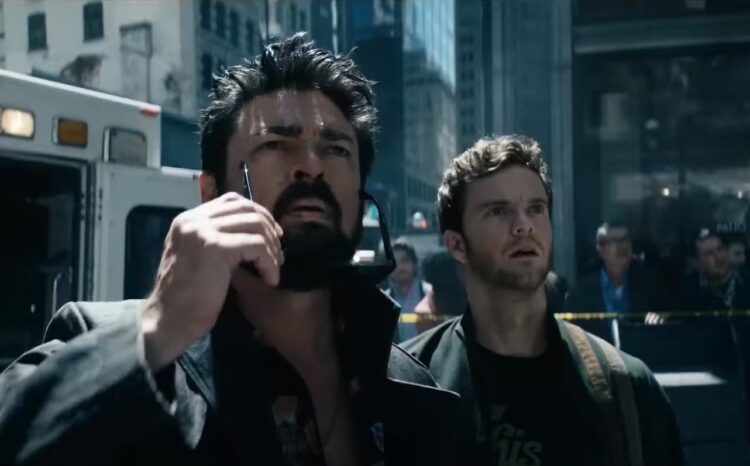 Well, people have been waiting to see what Soldier Boy would finally do, and they got their answer. The previous episode already made it clear that he’s a little more than Butcher and the others might have been expecting, and nearly cost them Kimiko. Amazingly though, it would appear that she managed to get her wish since her quick healing and super strength have left her, a fact that she’s ecstatic about. Spoilers are coming, so if you haven’t seen the episode it might be wise to stop reading now or keep reading if you don’t like being surprised. But the fact is that Kimiko’s happiness might be cut short thanks to Nina and her thug since she’s called in a debt on Frenchie, and when he doesn’t answer her call, it’s kind of evident that she feels a certain way about this. In the meantime, MM is obviously upset with Butcher and disappointed in Hughie for their use of the superpower-granting formula they’ve been taking, and Starlight is simply concerned that Hughie might be headed down a bad road by following Butcher.

To be fair, Hughie just wants to help, but he’s going about it in a way that feels less than optimal. MM is just about ready to walk away and enjoy time with his daughter when he sees Homelander on TV and is told by his daughter’s stepfather that the hero is her favorite. It has to be tough seeing your kid idolize someone you’re sworn to stand against, but there’s also the understanding that MM was traumatized by Soldier Boy, so the latter’s emergence into the story has messed him up even further, as the news of what Soldier Boy has done almost sends MM into a panic attack. When he, Butcher, and Hughie converge on the site of the explosion where Soldier Boy let loose once again, perhaps on accident again, it becomes obvious that they’re dealing with something that is well beyond them and might even be a bigger threat than Homelander.

There are a few surprises in this episode to be fair, such as the meeting between Maeve and Butcher, which becomes a bit involved after they sit and share a bottle. Her willingness to help Butcher out has consequences, however, and that’s seen when Homelander, who appears to be reading the playbook of every character in the show at the moment, sets Black Noir on Maeve after he accuses her. After that, it’s stated that she’s off seeking treatment, which is a pretty obvious cover that Starlight doesn’t buy into. But even though Ashley has a chance to be human and do something to stop Homelander, she falls back on her cowardice and hides behind her title once again, since it’s kind of obvious that Homelander has pulled enough strings to make people fear him, which is swiftly becoming a replacement for the love and admiration he wants so badly. It’s still fairly easy to see that the leader of the Seven, and now Vought, is becoming a little more unhinged by the episode, and there’s no telling what might happen when he and Soldier Boy finally do get to meet.

Initially, it’s understood that Soldier Boy might not have been a match for Homelander since while he was exceptionally tough, he wasn’t nearly as strong as the other supe. But now that he’s been subjected to various tests and been augmented somehow, it would appear that Soldier Boy is no longer just the shield-bearing supe that he was in his own time. It would also appear that he’s not in that much of a forgiving mood since while allowed the Legend to live, which is kind of easy to see why, he wasn’t quite as understanding when it came to his old flame, as Crimson Countess found out. The cameo by Seth Rogen was…well, interesting to say the least, but the fact that Crimson Countess and her companions turned Soldier Boy over to the Russians was pretty cold, as was the admission that she’d never loved him. It would appear that Soldier Boy managed to get his strange body blast under control at that point since he didn’t look distressed in the least when he killed his former love interest.

A lot is happening in this episode, such as the confrontation between Blue Hawk and the black community, which doesn’t go well. There’s also the idea that Starlight and Hughie’s relationship might be on the rocks since his use of the compound and his inability to just sit back and be himself is taking a toll on both of them. Now it would appear that Butcher and Soldier Boy have struck a deal, as Butcher kept Crimson Countess in place for Soldier Boy to deal with, and now the rogue supe might be inclined to take care of Homelander.