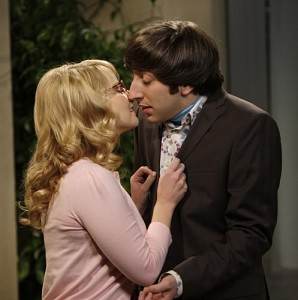 The big day is getting closer for Howard and Bernadette so it’s time for the guys and gals of The Big Bang Theory to engage in, as Sheldon would say, the social convention of the stag party. However, things don’t go quite as smoothly as Howard may have hoped they would as a viral video from the event causes Bernadette to question her decision to spend the rest of her life with Wolowitz in this week’s episode. It’s about time they had Bernadette realizing just what kind of person her fiance used to be, but there’s no denying the effect that she’s had on Howard’s personality in her relatively short time of knowing him and this episode definitely gives him a chance to prove it.

Everything kicks off with the boys gathered around the university lunch table as Sheldon initiates some nerdy hypothetical that only he knows the ‘˜correct’answer to. This week he posed the question, what would the best organism be for a human to fuse with? The boys gave answers ranging from swan to horse to kangaroo for various reasons, (and if you’ll note especially with Howard and Raj that their wardrobe’s color scheme matched that of the answers they gave, so awesome job TBBT wardrobe dept.) but Sheldon believed that lichen was the only correct answer. No one should be terribly surprised that while the others picked more conventional beasts, Sheldon picked something with the qualities of both algae and a fungus in order to make himself a real ‘˜triple threat’post-fusion.

Once that show-opening bit is out of the way it’s time to discuss the actual plot of this episode which centers on Howard’s stag party. Now, the Wolowitz of the past would have been all over the idea of a lavish affair packed to the gills with as many half-naked women as he could fit into a room, fire code permitting. Even when he claims there will be no strippers at the party you wouldn’t be alone if you felt that he may have only said that because he thought he should in order to avoid getting into trouble with the soon to be Mrs. Rostenkowski-Wolowitz.

But when the stag party goes down it’s all scotch, fine food, and a select group of the recurring male characters who the boys still keep acquaintance with including Wil Wheaton, of course. Along the way we learn that Wil Wheaton is close enough with Howard to be invited at all, and that Stuart’s comic shop must not be doing too well as he practically does everything but panhandle for change with the other guests. Each of the core group takes their turn telling what are supposed to be the requisite embarrassing but ultimately good-natured stories about Howard. Sheldon’s mostly insulting toward him but that’s his way so it gets a pass, Leonard uses the venue as a display of his own insecurities which shocks no one, and then…Raj stands up.

His speech goes from being an endearing ode to his first friend when he came to this country to a pretty grimace-worthy account of some of Howard’s less than savory former sexual conquests all while a gleeful Wil Wheaton records the whole thing on his phone. The most scandalous of the stories is Raj, Howard and a girl in a Sailor Moon costume having a three-way at Comic Con. I could say a lot about how this show declines passionate female nerds of the fandom-participating persuasion the same respect they do with the boys, but I digress. Thanks to the instantaneous nature of viral videos on the internet, Bernadette is already livid at them both when she has to leave her own wedding gift bag assembly project with Penny and Amy to come pick Raj and Howard up. It does manage to pose a genuine roadblock for what, so far, has been relatively smooth sailing for she and Howie as Bernadette has to come to terms with what her man was like before they met.

There actually aren’t a lot of episodes of this show that manage to keep the focus on those other than Sheldon and Leonard, the arguable leads of The Big Bang Theory. But this episode was wise to let them both mostly take a backseat so that Howard Wolowitz could get the chance to prove that he really has become a changed man because of his relationship with Bernadette. When she gives him the silent treatment and openly doubts if she should go through with the wedding to Amy and Penny, Howard shows up and delivers a nicely understated but sincere speech about what knowing her has done for his evolution as a person and as a man. It’s especially the part when even he admits that the former Howard was someone he was ashamed of being that it’s clear he’s truly had some impressive growth as a character from the desperate horndog with a penchant for cheap pick up lines and multi-colored polyester pants, (well he still has the same wardrobe but you get the meaning) that long-time viewers of the show remember very well.

So all’s well that ends well as the wedding stays on-track to happen likely near the end of this season. Though it really begs the question of whether or not Raj will get a little tipsy and wind up being someone who objects to the nuptials–he’s shown himself many times to love Howard as a very good friend and certainly…nothing more than that. Really, there’s going to have to be a point where this show definitively pulls the trigger on Raj’s thing for Howard because even if he denies being anything other than straight–someone tell that to the show so they can stop insisting on the jokes claiming otherwise, it’s getting to be tiresome if nothing will come of it. It’s starting to show as being a pretty cheap chance for laughs at the character’s expense as it’s still being used continuously all while Raj clearly has a deep affection for his best friend. You can’t have it both ways, show.