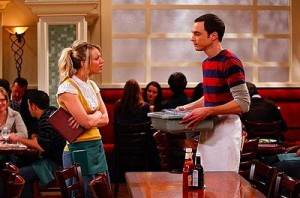 A manic-looking Sheldon is standing in the middle of the living room with his back to a white board that displays a very complicated looking equation. Every few seconds, he jerks his head back to look at it and then turns away. Penny has just woken up and walks into the room. Sheldon tells her that he is trying to view the problem on the board using his peripheral vision in order to activate a different part of his brain to solve it. Leonard enters, at which point Sheldon has resorted to running in front of the board to catch fleeting glimpses of the equations, and squinting at it through his hands held like a telescope. Leonard suggests that he needs a fresh start. Sheldon picks the board up, carries it over to the window, and drops it down onto an unsuspecting car. He grabs a blank white board to start over, and thus begins one of the most ridiculous Sheldon episodes ever. (I still can’t decide if it was ridiculous in a good way or a bad way. It was funny, to be sure, but the best episodes of The Big Bang Theory add more heart to the humor.)

In the cafeteria at the university, Howard and Leonard are eating lunch and watching as Sheldon flips through some books and mutters to himself about electron mass. Raj sits down and tells the guys about disco night at the roller skating rink. Howard and Leonard think that Bernadette and Penny would love to go, so they arrange a double date. Raj is upset because he was the one who suggested it: “No, it’s okay, I don’t have to go. I’m happy to guide you and your ladies to suitable entertainment choices. I’m a walking, brown Yelp.com.” Sheldon is still sitting at the table ranting like a crazy person. He grabs the lima beans off Raj’s plate and says he needs to use them as carbon atoms. Then he scrapes Leonard’s peas onto the table to be the electrons.

In the next scene, Penny and Bernadette are walking up their stairs together after their roller disco date, talking about how much the guys had embarrassed them. Howard and Leonard follow (wearing some very sparkly clothes…), congratulating themselves on their awesome dance moves. They all reach the landing, and Leonard opens the door into his apartment. Penny goes in, not seeing that the floor is covered in marbles, and slips on her back. Leonard is a step behind her and falls flat on his face. Sheldon screams at them for ruining his model. His face is starting to look very twitchy. He hasn’t rested in three days: “I don’t need sleep. I need answers! I need to determine where in this swamp of unbalanced formulas squatteth the toad of truth.” Bernadette calmly asks him like she would a child, what happens to people’s neural receptors when they don’t get enough REM sleep. His eyes widen as he realizes that lack of sleep is limiting his cognitive function. Bernadette becomes stern and tells him to march back to his room, brush his teeth, and go to bed. Leonard is so impressed how she got Sheldon to do what she said, and she replies that she knows how to handle stubborn kids because her mom operated a secret day care center out of their basement.

Leonard and Penny are asleep in her bed when they are awakened by the sound of an evil laugh (his ring tone is of the Joker from Batman). He answers the phone, and then has to get dressed to go get Sheldon. Penny asks what happened, and Leonard tells her that “Sheldon has escaped and is terrorizing the village.” He arrives at a Chuck E. Cheese-type place where a security guard is waiting. Sheldon is in the ball pit using the balls to visualize his carbon atoms. Leonard tries to coax him out, but he says he can’t leave because he’s working. Leonard says he will come in there and drag him out. “You can try, but you’ll never catch me.” Sheldon dives under the balls and Leonard starts wading through the pit. The balls are flying around all over the place, and Sheldon occasionally pops up in the midst of the chaos to say, “Bazinga!” as Leonard tries to grab him.

Leonard and Penny are once again sleeping peacefully, and they are once again interrupted by Sheldon standing over them knocking on the wall, “Leonard and Penny…Leonard and Penny…Leonard and Penny.” He happily tells them that he figured out how to solve his problem–Einstein. When Einstein discovered special relativity, he was working at the patent office. All Sheldon needs to do is find a menial job so that part of his brain can be engaged in a simple routine task while another section of his brain will be freed up to work quietly in the background on his complex physics problem. The next day, Sheldon goes to the employment office and asks for a menial job. After offending the woman who works there, and proving that he has no appropriate skills to do any of the “menial jobs,” she goes and calls for security to kick him out.

Penny is at the Cheesecake Factory working when Sheldon comes out of the kitchen in an apron and proceeds to bus tables. She is confused why he is there, so he explains, “I asked myself, ‘What is the most mind-numbing, pedestrian job conceivable?’ Three answers came to mind: tollbooth attendant, Apple Store genius, and ‘What Penny does.’ ” (The look in Kaley Cuoco’s eyes after he said this was priceless. After three seasons, she has reached the perfect balance of annoyance when these nerdy guys display their poor social skills, and patience with their antics because they have also proven through three years of friendship how sweet they can be–without that last part, it wouldn’t make sense for her to put up with dating Leonard and tolerating Sheldon’s rudeness.) He then tells her that he has already had an epiphany while scraping food from a plate.

Leonard, Howard, and Raj have come to eat there, and Sheldon brings them out their food. Leonard has lots of fun being a difficult customer for his bossy, know-it-all roommate. Penny comes over to take their order and sees that they’ve already been served. “Sheldon doesn’t work here!” On the other side of the dining area, Sheldon drops a tray of dishes (cue the inevitable clapping from one table of obnoxious people). Looking down at the shattered glass on the floor, Sheldon solves his equation–he had been thinking of the electrons as particles. “It’s a wave! … The moment to applaud would be now!”

In the last scene, Raj and Howard are at another roller disco night. Raj is having the time of his life, decked out in a shiny gold outfit. Howard, in tight pink spandex pants and a bright rainbow shirt, clearly doesn’t see the appeal of this experience with another man.

Check back next week for a recap of episode 15, “The Large Hadron Collision,” in which Leonard has to choose between Sheldon and Penny as his guest to a science convention in Switzerland. 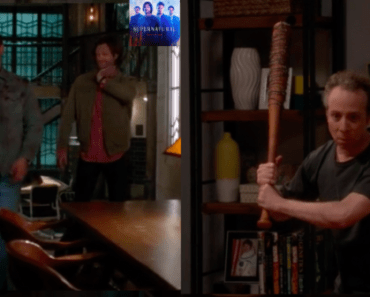 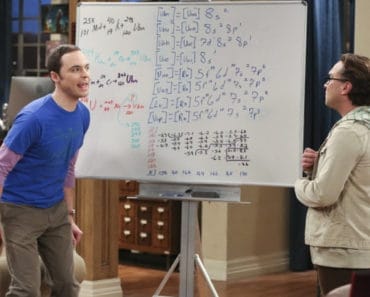 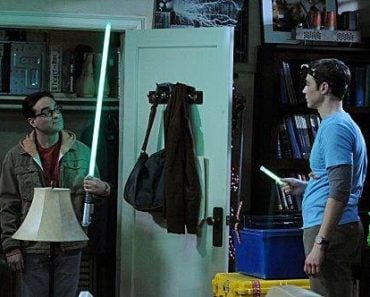 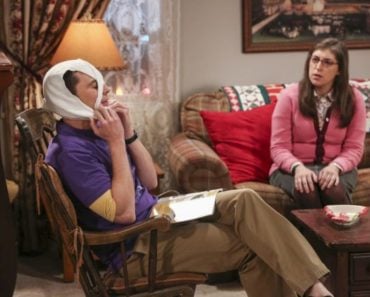 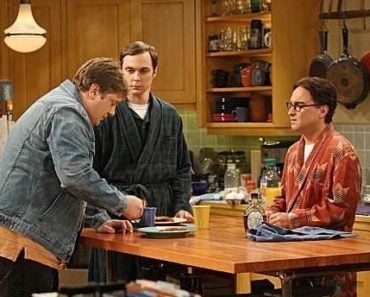 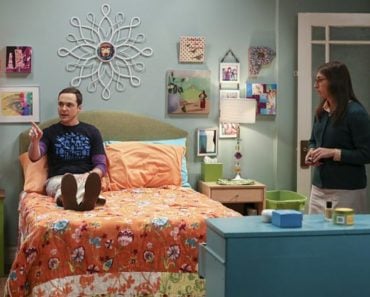