Home
Television
24
The 10 Most Tragic Deaths in 24 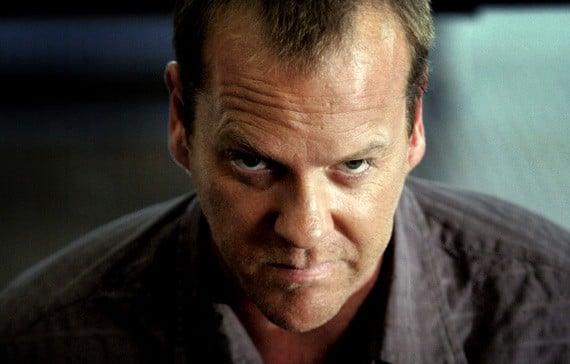 You realize that by even looking at his picture, you’ll probably be killed by the end of the day right?

When Jack Bauer says that he only hurts those closest to him, it’s not hyperbole, it’s a fact. Quite literally the majority of people Jack has befriended, talked to, investigated or married have ended up dead. Sure he’s saved the world going on seven times, but is it worth having everything he touches turn to ash? Here are the ten most tragic instances where Jack’s friends and associates have been blown up, gassed or shot.

Killed in the first hour of season five, Michelle’s death by car bomb still has lingering effects to this day. Her husband Tony Almeida cheated death the first time in that attack, then once more in season five, and his conversion to the dark side was spurred on by her death which ended up having been ordered by the corrupt government.

I didn’t even realize that Milo made an appearance in season one, but his major role was in season six working full time at CTU. After the building was taken over, Milo stepped up for his girl, Nadia, and said that he was running the place. He was promptly shot in the face.

He may have been a guest star, but the by-the-book government supervisor ended up giving his life to save most of CTU (even though the nerve gas attack was carried out using his stolen key card).

Edgar was everyone’s favorite lovable speech-impeded CTU analyst, and his death gasping from poison right in front of his best pal Chloe was truly tragic.

Sure Curtis may have been acting a fool, but it was still painful to watch Jack shoot his friend. Curtis had been a staple on the show for awhile, but I suppose there is no cooler death than to be shot by Jack Bauer himself. Except maybe throwing yourself into a volcano or something.

This is the only evil character you’ll see on this list, and I think her death was tragic just because it was so uninspired. Nina was one of 24‘s most vicious villains, and one of the only ones who lasted more than one season. Her death at the hands of Jack hidden by obscured security cameras was just odd, and she certainly deserved a more epic demise.

Mason’s character went through one of 24‘s first major redemptions. He was the typical dickish administrative peon for much of the show, always questioning Jack’s motives, but once exposed to plutonium and facing certain doom, he stepped up to the plate and saved Jack’s life by kamikaze-ing a nuclear bomb into the desert so Jack wouldn’t have to.

All day Jack has been told that he has to assassinate David Palmer or his family would die. He scraps the mission and ends up killing the terrorists instead. Except one little spy that is. The Nina Myers reveal was one of 24′s first great twists, but what came next made the show what it is today.

The fact that Nina ended up killing Teri anyways convinced me that 24 wasn’t just another ordinary show. That doesn’t just happen. You don’t spend 24 episodes trying to save someone only to see them pregnant and dead at the end of it all. That moment made 24 great instead of merely good.

It’s not that Ryan Chappelle was a particularly likeable character, it’s the circumstances surrounding his death. Stephen Saunders was holding the nation hostage with the threat of a biological virus attack. He discovered Chappelle was unraveling his plans so he called the president and demanded he be killed or he would release the virus. The president called Jack to do it.

It was the ultimate philosophical question, do you trade the life of one innocent man for the possibility of saving 10,000 others? Well, according to Jack “Socrates” Bauer, the answer is yes. He shot Ryan point blank in the back of the head right before what is one of the most memorable silent clocks in 24 history.

We were all promised something big at the start of season five, but no one knew quite how big. When David Palmer first appeared on the screen fans everywhere rejoiced that he would be back for another season. And then he was shot in the neck.

It was perhaps one of the most jarring moments in the show’s four seasons, and in my dorm where I was watching you could literally hear cries of “Nooo!” echoing down the halls from every other doorway. The assassination of David Palmer kicked off a rather good season which involved a conspiracy that went as high up as you could go in politics.

I still miss him every time I see an Allstate commercial.