Home
Entertainment
That’s Interesting: Where Did Dodgson Get the Barbasol Can? 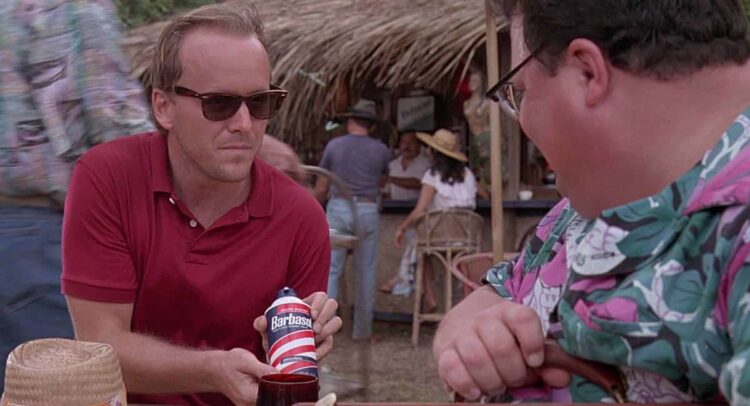 It’s been so long since Jurassic Park hit the theaters that a lot of people might not have made the connection between the first movie and Jurassic World: Dominion when it comes to Lewis Dodgson. To be fair, I missed it until the can of Barbasol came up as a prop being used in the latest movie. But the question that has to be asked is this: Where in the world did Dodgson find that can? Or rather, who found it and how did it come to be in his possession? It’s a question that a lot of people might be interested in finding an answer to since retrieving the can would have been the type of miracle that would have required certain events to occur that might have been seen as nearly impossible by many and a little too lucky to be seen as realistic. It’s true that things happen, and that what might be thought of as impossible by a lot of people would have taken some impossible act of nature to unearth the can. But in the movies, anything is possible, so it’s not too hard to think that Dodgson would have been given the can.

After so long it’s easy to think that the contents of the can would no longer be viable, but it’s easy to think that the embryos would be dust, or a biological equivalent since the cooling system within the can couldn’t have lasted indefinitely, even buried in mud. In truth, the can is just one of the many things that a lot of people are bound to notice as a throwback to the original movie and a connection that could keep everything flowing as it needed to so that it could make sense. At this point though, the number of throwbacks that have been seen in the movies have been fully appreciated by a lot of the fans.

The can though, would have been Biosyn’s way into the race to create dinosaurs first and to possibly create them best since without Hammond in the way. Just imagine what would have happened if John Hammond hadn’t been there to start with, as Dodgson might have been able to corner the market and create a Jurassic World before Hammond could get his idea out to the people. But without that can of Barbasol, it feels as though Dodgson had to pick up the scraps and use Hammond’s idea to create his own world in which he could use the dinosaurs as he saw fit. To be honest, Dominion kind of feels like a castoff, a gathering of remnants from a failed dream that wasn’t meant to go anywhere. In a big way, everything since Jurassic Park has been an attempt to recapture the dream and then, in the past two movies, to deal with the consequences that were bound to come from it. The idea of bringing dinosaurs back was never going to be a one-and-done type of idea that would result in a ‘whoops, let’s get back to the drawing board’. It was going to be a series of mistakes that would continue to grow and grow until it became obvious that the arrogance of humanity was going to be their downfall.

At this point, the can of Barbasol is a memory more or less of a time when things were still insanely simple compared to what they’ve become. Back then, the welfare of the dinosaurs wasn’t really a big concern since they were seen as attractions, deadly ones at that. But as the years have moved forward, and attitudes have changed, things have changed with them. The can of Barbasol represents a lot of things, but one of them is the idea that at one point, Biosyn was not a danger, nor was Lewis Dodgson. At one point, dinosaurs were little more than modern attractions that were ahead of their time, but still not meant to be introduced into a world that had already seen them come and go. As of now, the way things are is a far cry from the zoo-like mentality that John Hammond envisioned, and Lewis Dodgson is one of those that tried to make use of the past that blossomed into the uncertain future.

It does look as though the can is more of a memento at this point, a means of remembering something when it was still in its infancy, and not much more. The fact that Dodgson thought to take it along is kind of interesting. But at the same time, it’s a relic, a piece of cinematic history that was interesting to see given that it was introduced so long ago. But apart from that, it’s something that could still be used to mess with the audience a bit. It was a nice throwback to be fair, and it was appreciated.