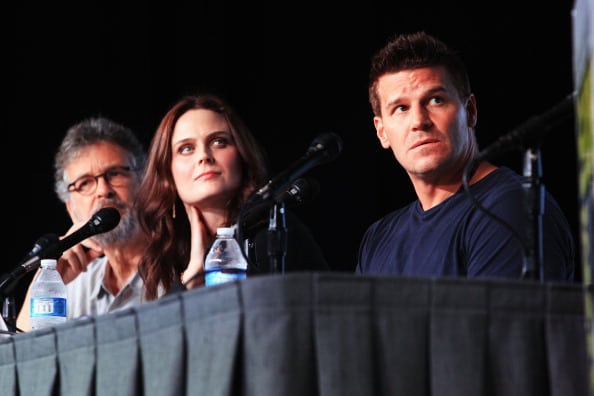 Last week, fans of Bones learned a little bit more about the 10th season that is slated to return this fall in a new time slot. The upcoming season will focus more on conspiracy theories and Booth’s relationship with the FBI. The season nine finale dealt with Booth get arrested for potentially murdering FBI agents. Now that the Ghost Killer is caught, do not expect any other serial killers popping up anytime soon. Take a look at these ten interesting facts you may not know about the show that has been adding comedy to murder investigations since 2005. 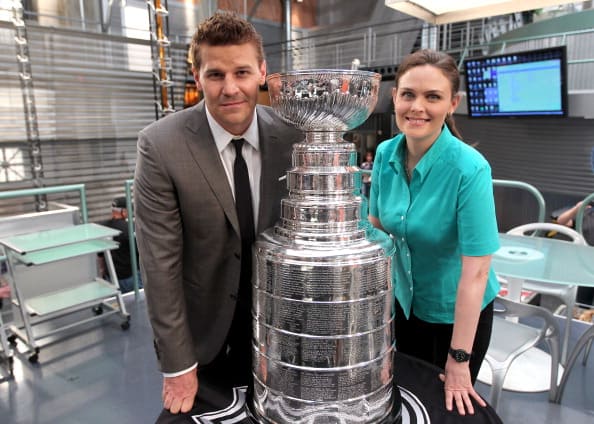 1. A series of coincidences have happened after episodes of Bones have been written. A dwarf wrestler was murdered in late 2009 shortly after the episode, “The Dwarf in the Dirt,” was shown. In the episode, Booth and Bones investigate the murder of a dwarf wrestler that was killed. “The Goop in the Girl,” featured a man dressed as Santa robbing a bank. Shortly after the episode was written, the same event occurred. Furthermore, a body part was discovered in a chicken nugget after the writers came up with a similar idea in the season five episode, “The Tough Man in the Tender Chicken.” 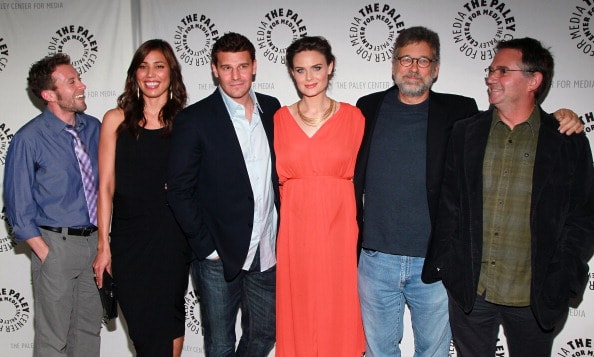 2. The cast and crew have two pets on the set of Bones. The first is a squirrel named Dr. Sweets named after the character John Francis Daley has been playing since 2007. The animal will try to get food from the cast and crew and cling to the legs of female cast members. The second pet is a cat and is named Camgela. This is a combination of the characters Camille played by Tamara Taylor and Angela played by Michaela Conlin. It has been labeled the friendliest, and also the prettiest, cat on the entire FOX studio lot. Though, I don’t think there are many cats on the lot anyway. 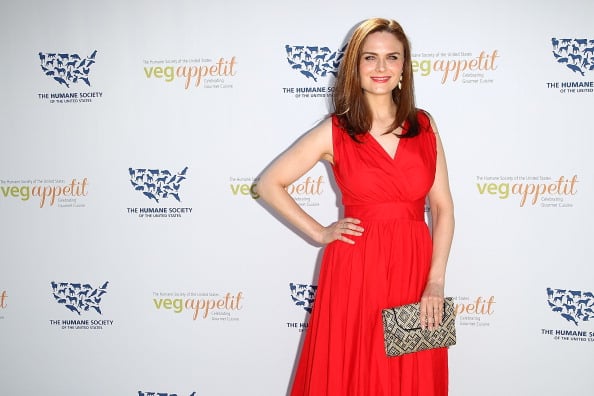 3. Emily Deschanel is a huge fan of Cyndi Lauper, and has been since she was younger. Lauper had been a fan of the show and was more than happy to guest star as psychic Avalon Harmonia. She has made three appearances on Bones, the last one being, “The Woman in White,” where she sang at Booth and Brennan’s wedding. Deschanel sang “Girls Just Wanna Have Fun” in the season three episode, “The Wannabe in the Weeds.” Deschanel claimed to be extremely nervous filming this scene because she knew Lauper would be watching.

Photo by Joe Scarnici/Getty Images for The HSUS 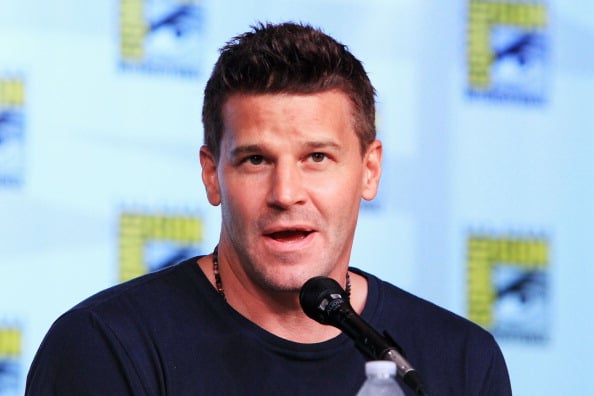 4. We all know that David Boreanaz starred on the series Buffy the Vampire Slayer and Angel, but those were not the first shows that the Bones actor starred in that involved vampires. Boreanaz starred in the very cheesy movie Macabre Pair of Shorts in 1996. The movie was about two vampires, a killer mime, and a film reel that erases anyone who watches it. Boreanaz played a vampire’s victim. The following year was when the actor would get his big break on Buffy. David can also thank his dog for becoming famous. He was taking the pup out for a walk in Los Angeles when an agent approached him. 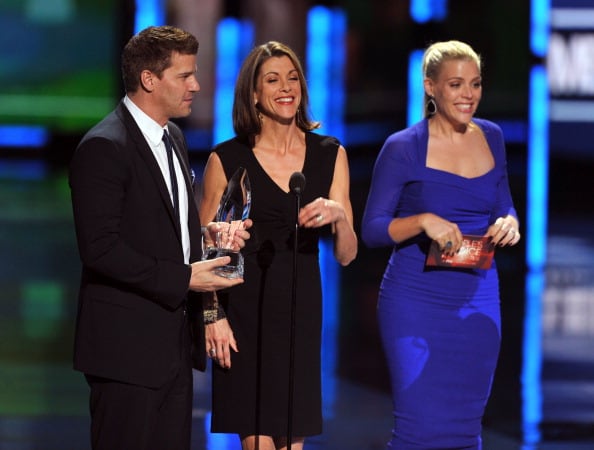 5. Bones was named the Top Television Series by the ASCAP Film and Television Music Awards in both 2009 and 2013. The series has also received two Emmy nominations. The first was in 2009 for Outstanding Art Direction and the other was in 2012 for Outstanding Special Visual Effects. Bones is also the recipient of four People’s Choice Award nominations for Favorite TV Crime Drama from 2011-2014. Emily Deschanel would receive a nomination for her work in 2011. Both Deschanel and Boreanaz have received several nominations at the Teen Choice Awards for their performances, but have yet to win a surfboard. 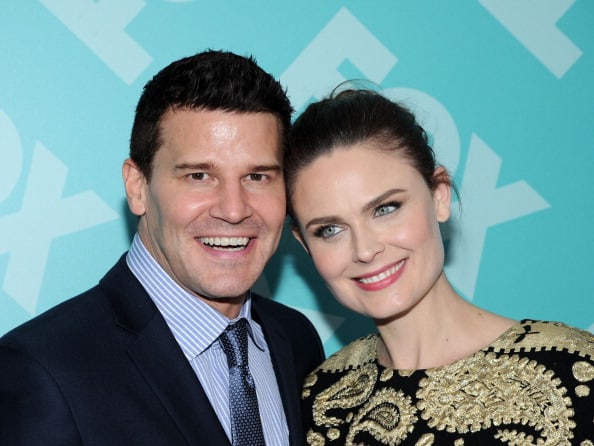 6. Even though the show is set in Washington D.C., most of Bones is filmed on the studio lot in Los Angeles, California. The street set where you can see the team eating at the Royal Diner is the same street set that was used on How I Met Your Mother. Since the Jeffersonian Institute is fictional, external shots of the building are actually that of the Natural History Museum located in Los Angeles County. The images that are used are from the Exposition Park Rose Gardens side of the building. When Booth and Brennan venture to London, the two-part episode was filmed on location. 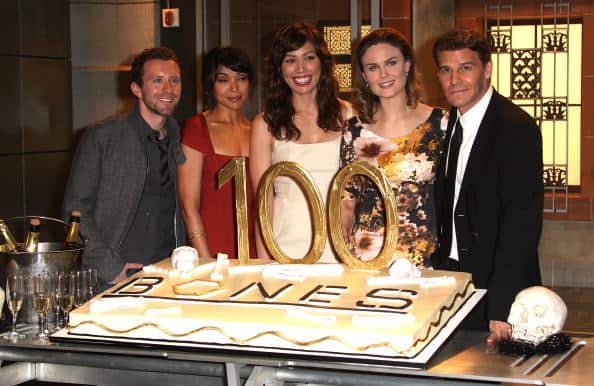 7. The premiere episode of Bones attracted 10.8 million viewers. It would finish first in the coveted 18-49 demographic in its timeslot. After only three airings, the show was picked up for a full season. The show would rank #60 overall during its first season. The highest rated and most watched season of Bones was the 6th season, which averaged 11.57 million viewers and was the 29th most watched show of the season. Over the course of nine seasons, the crime drama has averaged 9.65 million viewers. The show saw a drastic drop in rating when it was moved to Fridays in November 2013. It will air on Thursdays this Fall. 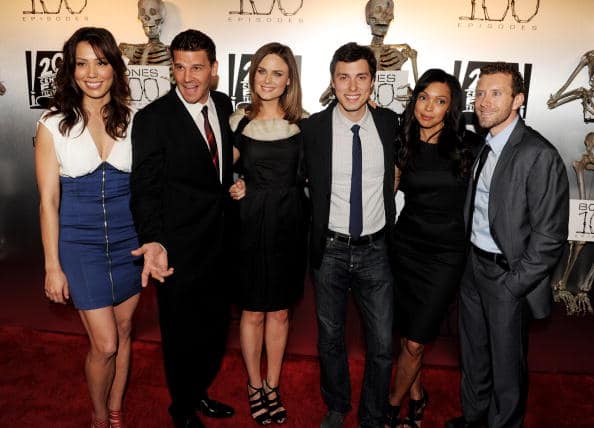 8. FOX has used the internet countless times to promote the show. The season two episode, “The Glowing Bones in the Old Stone House,” featured Brennan and her team using MySpace pages to catch a murderer. Fans of Bones could visit these pages before the episode aired to read up on the suspects. The show is now prevalent on Facebook and Twitter. Additionally, there was a spin-off series released to Sprint TV customers in November 2006 that involved Jeffersonian lab technicians solving crimes. The two minute episodes were then featured on the official show website in December 2006. 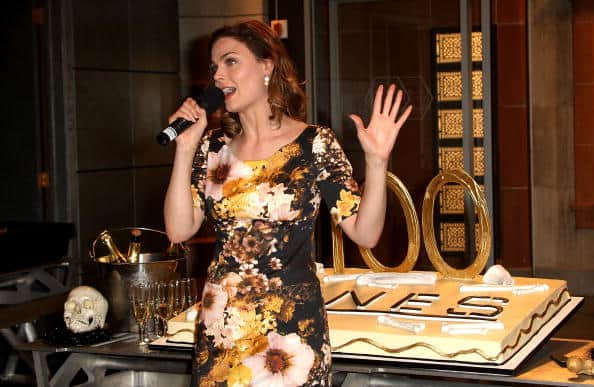 9. Emily Deschanel is still grossed out by the props that are used on the set of Bones. During an interview with Fan TV, Deschanel admitted, “I’ve become a bit desensitized honestly, but I do get grossed out for sure by things. Once you start thinking about how someone dies by being burned; that’s kind of horrible. So, you don’t let yourself think about it too much. I guess that’s why Brennan behaves the way she does. I know it’s fake but it can be disgusting.” Deschanel even visited a coroner’s office to research the topic after getting the part. 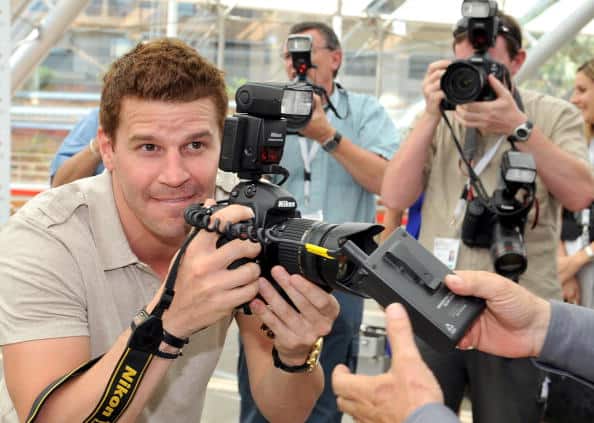 10. Bones fans know that David Boreanaz is a huge hockey fan. He even has been able to show off his moves on a few episodes of the crime show. David grew up in Philadelphia, Pennsylvania which is why he is a Flyers fan. You may not know that when he was growing up, Boreanaz was a ball boy for the Pittsburgh Steelers, which is his favorite football team. He even had the opportunity to train with Jack Lambert, who played on the team from 1974-1984. Boreanaz had hopes of going pro, but injured himself during a high school game.