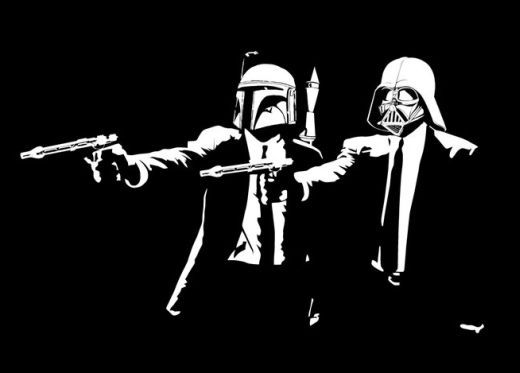 Perhaps no film series has had more of an impact financially, aesthetically,  and emotionally than the Star Wars franchise.   Since the 1970s fans have been obsessed with the movies and characters.  We could easily see this movie series lasting another 100 years with the right chain of directors and marketing.  But there’s one area we’d like to focus on today.  An endless legion of fans means an endless amount of remixes and mash-ups, and for the truly die hard, costumes, scripts and special effects.  Here are ten of my favorite, in no particular order.

“Has this ever happened before?”

An extensive budget (relatively speaking) yields one of the better videos on this list, that actually fills in some holes from the original films.

I actually think that all of Phantom Menace could have been filmed like this and the film wouldn’t have lost anything.

This is a bit adapted from a rather hilarious Eddie Izzard stand-up bit. Please try to ignore the worst Darth Vader costume ever.

The most famous parody out of all of them. I still don’t know how they did the voice to such perfection.

I remember listening to this like back in middle school, but with the new accompanying video, it’s better than ever.

Is the armor really necessary for cubicle life?

Not just any ordinary mash-up, this is very well done. Picard v. Vader is one for the ages.

10) Darth Vader Being a Jerk