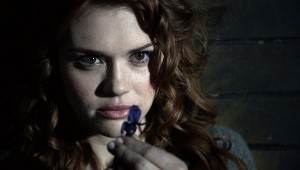 Well, damn. What just happened on Teen Wolf? Answer: a whole freaking lot! Where do we even begin?

Who would have pieced together that Lydia’s new friend’s identity was either an alter-ego or younger version of Peter Hale? No one and that’s what made it brilliant. There was a theory that the guy was not real to begin with, but that’s as far as speculation went. So what in God’s name could Peter want Lydia to do? And what could it have to do with the wolfsbane flower? Is she supposed to move the flower away from Peter’s “grave?” If that’s the case, Derek’s reign as Alpha might be over…

Jackson’s Not Alone in the Kanima World

I’ve always had the inkling there was more than one kanima in town and tonight proved that point. While Jackson was at the police station being a punk, another creature was out with their master terrorizing a couple, killing the male and sparing the pregnant female. That is until the woman met her demise at the hands of the Kanima Master after she gave birth to her child. What could this couple have done to piss this guy off? Who is this crazed lunatic (*cough* Mr. Harris *cough*)? And more importantly, who is the other Kanima?!

One of the other big reveals of the night dealt with how Jackson’s past might have something to deal with his transformation into a Kanima instead of a werewolf. Bad weregirl Erica came in handy tonight (other than being a nuisance to some fans of Teen Wolf) by divulging some interesting facts surrounding Jackson’s birth parents, which revealed that they not only were dead, but died in a car accident that looked eerily staged. 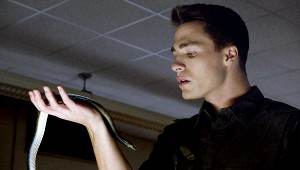 So were Jackson’s parents murdered and could that possibly be the catalyst to him becoming a Kanima, since they serve their own brand of karma by hunting and kill murderers?

At the end of the night, Scott and Derek realized that they needed to let bygones be bygones to stop the Kanima attack on Beacon Hills. There is a higher threat at play here and they will need all the brains, supernatural brawn and muscle to take down their new opponent. Hopefully Derek won’t screw this up by being an Alpha wolf and hopefully Scott doesn’t screw it up by letting his emotions get the best of him. Bottom line, these two have a hell of a lot to work on if they want to carry out their endgame.

– Matt is looking more suspect by each episode and him knowing about the Kanima now on makes matters worse for the gang. Never leave nuggets for a snooper. It’s like leaving a bowl of milk for stray cat. You will never get rid of it.

– Erica has a crush on Stiles? Awww. Hopefully this will bring up a catfight between a jealous Lydia and Erica in the future. Then again, that fight would be woefully one-sided and Lydia has been through enough werewolf drama to last a lifetime.

– Speaking of fights, how about that dogfight in the school locker room between Jackson and Scott? Epic.

– Scott’s mom, Melissa, is so becoming the Joyce Summers of this series. I pray nothing happens to this woman, because I can’t suffer another episode like Buffy the Vampire Slayer‘s “The Body.” I’m getting upset just thinking about it. 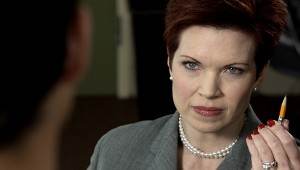 – Eaddy Mays continues to own her role as Victoria Argent and I pray nothing happens to her as well. Oh what was going through my head as she sharpened those pencils. I wouldn’t blame Scott if he wore a damn athletic cup like a chastity belt after that scene. Seriously.

– There wasn’t one ounce of Danny anywhere. Booo.

Last night’s Teen Wolf delivered on a lot of burning questions that have had fans buzzing since the beginning of this season, and some as far back as season one. What happened to Jackson’s parents? (Murdered?) What’s up with Lydia? (She’s Peter’s “Plan B”) Are there two kanimas? (Hell yes!) The answers came fast and furious last night to the point that I had to watch key scenes over again, due to me still being blown away from a previous reveal. With only five episodes left in the season (I know, that’s all?!), it is clear where the plot threads are headed and all we can do is just sit back and enjoy the ride.