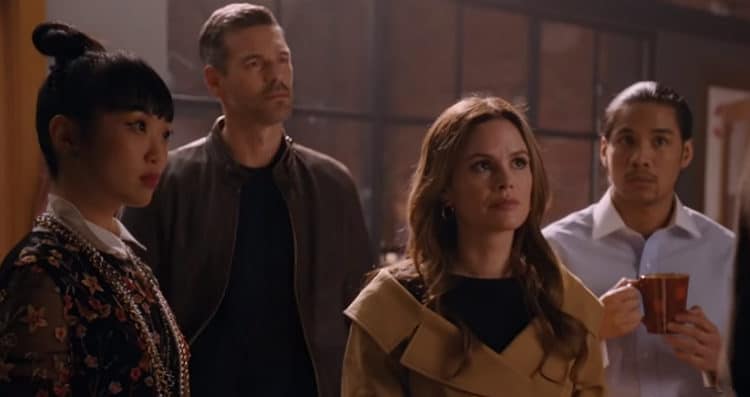 Take Two episode 4, “Ex’s and Oh’s” is the one that brings the show to where it needed to be!  Up until now, it was difficult to buy into Sam Swiff (Rachel Bilson) and Eddie Valetik (Eddie Cibrian) ever having a romantic dynamic.  Not anymore!  It’s taken 4 episodes, but Gigi’s all grown up. Now, it’s game on!  Take Two episode 4 is a real turning point in for them as a possible romance.

Before Take Two episode 4 the romantic element is the only piece that Take Two hadn’t nailed in yet, so the previous episodes have still been enjoyable   In particular, the cases have been an excellent blend of serious and comically quirky subjects.  Each case has had twists which revealed unexpected motivations for the crimes being committed, some of which also have had a personal and emotional underpinning.  Fans of the show Castle recognize these points as signatures of the creators – Andrew Marlowe & Terri Edda Miller (MilMar) – who are also the creators for Take Two.

However, except for the end of episode two, there hasn’t been much sense of a deeper emotional connection between Eddie and Sam.  Furthermore, the connection that was being suggested hasn’t felt like two romantically inclined adults.  It’s been more like a big brother and his little sister.  That’s a very different start from MilMar’s first show Castle.  In that show, the attraction was clear from the pilot.  Of course, siblings, although related, are never exactly the same, right?

Take Two Episode 4 – The Case of the Sex Tape

For “Ex’s and Oh’s”  MilMar decided to take on the scourge of modern-day Hollywood: a celebrity sex tape.  Specifically, it’s one of Sam and her ex-fiancÃ©.(Greyston Holt).  We first learned about Dylan – an “A-list” star because of starring in a money-making B-list action trilogy – in the pilot episode.  He broke up with Sam in a very public with Sam.  It’s the thing that sent her on the bender that landed her in rehab.

Hearing the story is one thing, but seeing it is another.   Thanks to Eddie’s tech guy Berto (Xavier de Guzman) filling in the details to Monica (Alice Lee), Sam’s assistant we get to see the video of the actual red-carpet breakup.  It’s pretty brutal, and with it being so public, we can surmise that Eddie has seen it as well.

Therefore, when Dylan shows up at their office, Eddie’s first question to Sam is if she wants him to get rid of him.  He knows just how raw this has to be…or maybe he didn’t.  He certainly wasn’t expecting this!

This is a perfect example of a dramedy moment!  It’s a funny take on a serious moment.  In it, Eddie seems both amused and impressed that Sam was attacking Dylan.  There’ll be more on that topic later.

When is a Robbery More Than a Robbery?

It doesn’t take long to discover that this wasn’t a typical break-in. That the person who has the laptop turns out to be a bratty teen thief named Zeke (Patrick Lubczyk) was an amusing surprise.  (It also gives credence to Sam’s theory that a fan mad at Dylan for dumping her committed the robbery.)

Unfortunately, Zeke is all about the money.  He does though give Sam a chance to outbid the tabloid for the sex tape.  Thirty-five thousand dollars later (via Dylan) they have the computer back.  However, someone else is interested in that laptop.  It gets stolen by thugs in black SUVs!   Clearly, this move was not about the sex tape!

What is it about?  With help from Berto computer skills and contacts, they are able to discover that there are forty-two million dollars in an offshore account under Dylan’s travel alias!   It looks bad and makes Sam angry at herself for starting to trust him again.  However, when the trail leads Sam and Eddie to a shipment of heroin.

Upon seeing the drugs, Sam tells Eddie that she realizes Dylan has been telling the truth about not knowing anything about the money.  Unfortunately, they get caught in a DEA raid.  Even though they don’t say anything, the Feds figure out that the path leads to Dylan.

One of Many Emotional Turning Points: Stars Are People Too!

After Sam calls her lawyer and Eddie calls his friends-with-benefits detective Christine Rollins (Aliyah O’Brien) the Feds release them.  Sam asks Dylan if he gave up Dylan.  He tells her he didn’t because she said he was innocent.  Now, he wants her to tell him why she’s sure.

Because, when Dylan was 20 he lost his little brother to a heroin overdose.  He hates drugs.  He never touches them. 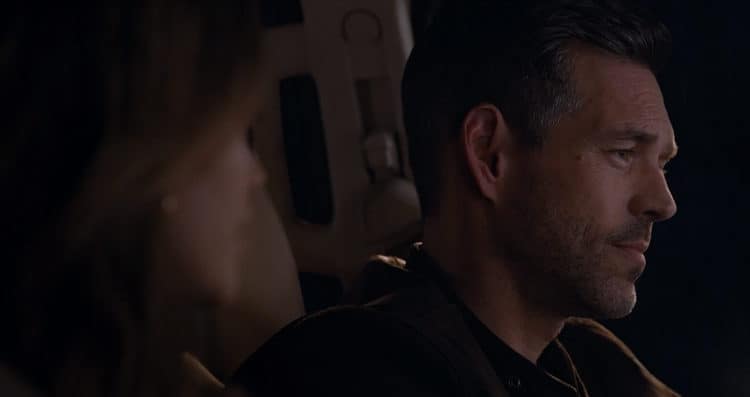 …Maybe that’s why when he dumped me I did so many of them. 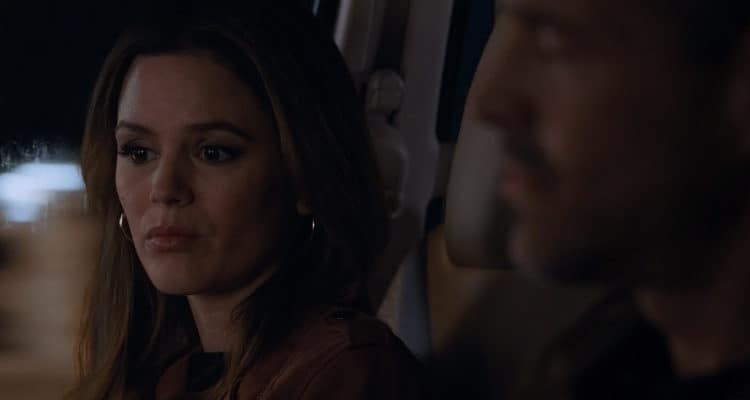 This is the kind of scene that made Castle soar.  In the midst of all the detective stuff and humorous portrayals, there are these instances of genuine emotions about relatable things.  Sam talking about Dylan’s brother – a story that clearly is not common knowledge – takes Dylan out of the role of the ‘shallow movie star.’

More importantly than what this does for Dylan is what it does for Sam.  It also offers Eddie – and the audience – more insight into the realness of what her relationship to Dylan once was.    Eddie and the viewers have been seeing a lot this in Take Two episode 4.  It adds another layer of meaning the title “Ex’s and Oh’s.”

Seeing Sam with Dylan gives him an “oh” – as in he suddenly becomes aware of her as a mature woman.

Between scenes like the one above and the reveal about Dylan’s brother, the specter of Sam and Eddie’s relationship is no longer that of being a part of some new Hollywood Brat Pack.  Take Two episode 4 makes  Eddie see Sam as very much an adult and puts them on equal footing.  That’s the piece which has been missing!

Eddie has Berto get Dylan out of his office before the feds can pick him up.  When the group gets together they discuss the possibilities of who could have hacked Dylan’s laptop.  For a while, the prime suspect is the African charity Dylan’s gotten involved with.

However, during the time the Feds were questioning Sam they’d shown her a sequence of numbers that she’d memorized. (She reminds everyone that she used to “memorize nine pages of dialogue a day.”) Berto is able to trace the number to an offshore company.  Dylan recognizes the company name as belonging to Brock Cassidy (Tristan Shire) – his manager!  He’d set Dylan up by doing his transactions on Dylan’s computer.  When it was stolen it then became imperative to get it back because it had all the information

Now, the manager being the one behind this wasn’t a shock.  You knew he was mixed up in it somehow because he’s slimy from the first time we meet him.  We just didn’t know the why – ie the drugs.  Personally, I was thinking the manager wanted to up his client’s publicity!

Once they’ve figured out who’s got the laptop the trick is getting it back so that the sex tape can be erased before the Feds get it.  It means they can’t just turn in the manager.  In a sweet scheme, Eddie sets up a meeting with Brock to get the laptop back.  Naturally, he denies everything and threatens to post the tape to the internet if they say anything.  To Sam’s surprise, Eddie lets Brock go.  As Brock leaves, Zeke shows up – with the laptop.  Eddie paid him to get it back – the meeting was just a ruse!

It’s taken four episodes, but with Take Two “Ex’s and Oh’s” the show now has all the hallmarks of what made Castle a hit.  No, this is not Castle.  The set up alone shows that Sam and Eddie will be a different kind of romance – one with a slower burn than the lust at first sight that Richard Castle (Nathan Fillion) had for Kate Beckett (Stana Katic).

The use of the sex tape case was genius in that it forced intimate reveals and conversation that Sam and Eddie wouldn’t have had otherwise.  Even before that was introduced we watched Eddie be amused and impressed with Sam’s continuing to modernize his office – a carryover from episode 3.   He loved that she kept hitting beginning,  Then we saw him taking in the maturity and realness of what Dylan and Eddie once had.  We also got to see how well they’ve come to know each other.

These are the kind of emotional nuances that really are another MilMar signature.  No one does, “a romance wrapped up in a procedural” better!  Of course, there are some built-in complications.  Sam didn’t answer Dylan’s question about a possibility of them getting back together.

Right now it doesn’t seem like Sam wants Dylan back…but she didn’t tell him no.  That’s like when someone’s supposed to be dead, but they don’t show you the body!   Meanwhile, Eddie’s Christine point-blank tells Eddie that while their friends-with-benefits thing works fine, she sees something deeper in his connection with Sam.  Eddie denies it, but Christine pushes him, by saying Sam ‘brings out a lightness in him.” Furthermore, she’s fine with Eddie going for it with Sam. The question is, will he?

Now that Take Two has taken over, are you ready to go along for the ride?  Leave a message in the comments about how you feel about a season 2!

Take Two episode 4, “Ex’s and Oh’s” is the one that brings the show to where it needed to be. It’s now game on for Â Sam Swiff (Rachel Bilson) and Eddie Valetik (Eddie Cibrian)