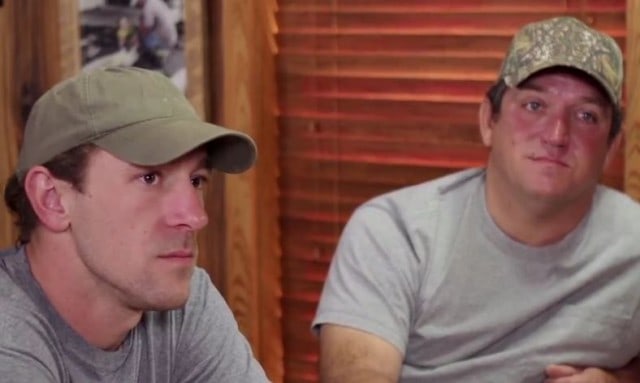 Tonight’s episode of Swamp People is aptly titled “The party’s over.”  When Daniel Edgar’s boys show up late and hung-over, the party quickly comes to an end. Fellas, you might not want to be drinking the night before you’re doing some serious gatoring. Bad idea. I mean maybe you could get away with that if you’re playing football with your buddies the next day and everyone’s feeling awful but it ain’t gonna cut it in the bayou where danger’s a lurkin’

Later on the episode Troy Landry does battle with a poacher. It appears that some unknowns are trying to steal gators and as Troy kind of says below (it’s very hard to understand him) he’s gonna have to get these guys. It just ain’t right. At least that’s what I think he says.

But the highlight of the night is watching Willie. He risks it all to get the biggest gator he’s ever hooked. But was the risk worth the reward? Is there even a reward? You’ll have to find out to see.

Finally, over in Hammond, Ron pushes to get the puppy a second chance with Bruce.

While the preview is only 20 seconds you’ll get a glimpse of what’s going on. The way Swamp people is currently going a season 2 has to be in the works right? I can only guess more families and more gators are on the horizon for the History Channel hit. I do however, have one suggestion and I don’t mean this in any kind of condescending way. We need subtitles. These guys have such thick accents that it’s extremely hard to keep up. Unless you’re from that region yourself (I’m from the Northeast) you’re going to have a very tough time following along. I guess the alligator action is good enough but I’d still like to know what these guys are saying.

Catch the crook! The #SwampPeople gear up for battle tonight on @HISTORY! https://t.co/wiwXPXJVni

Be sure to catch Swamp People Mondays on History at 8pm. Here’s another clip for your amusement

Fortunate to work with family. #SwampPeople

Posted by Swamp People on History on Saturday, March 12, 2016