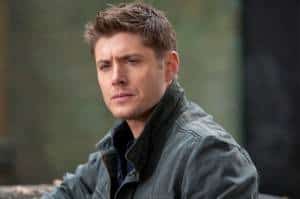 Welcome to the penultimate episode of Supernatural’s fifth season. Next week we arrive at the season finale, the end of the Apocalypse, the (possible) death of Lucifer and/or Michael and possibly a whole bunch of other people. But for now we have the Winchesters teaming up with Bobby, Castiel and Crowley to hunt down the last two horsemen (Pestilence and Death) and stop an evil pharmaceutical’s plan to distribute the croatoan virus as a ‘vaccine’for swine flu. Seriously, if that’s what the Ontario government injected into me when I got vaccinated late last year during the epidemic, I’m going to be seriously pissed.

You Look Good for Someone With the Common Cold, Dengue Fever, Japanese Encephalitis and the Chicken Pox. Oh, No, Wait….You Don’t

Pestilence has moved onto Iowa, where he’s masquerading at a doctor at a convalescent home and giving the patients all sorts of nasty diseases (no ebola, Pesty?). Those of you who were grossed out by the first appearance of Pestilence two episodes ago – where he was hacking and snotting all over that poor convenience store clerk – can rest easy. Here he looks like the picture of health. Right up until his unfortunate patient/test subject vomits green…stuff…over him. That’s when I put down my orange. Now Supernatural has ruined oranges for me too, just like they did with cheeseburgers in the 100th episode. Way to go, Show.

Rewind to a day earlier, where the brothers have reconvened at Bobby’s house before heading off to find Pestilence. Sammy’s done keeping secrets and has apparently told Dean about his possible plan to say yes to Lucifer to trap him back in the box. I have no idea how that will work. Will Sam say yes, walk into the box and then….what? How will he escape but leave Lucifer trapped? This is a bad plan, dude. BAD. Dean agrees with me. I also find it ironic that anyone is even considering this plan because Sam spent the entire 100th episode trying to convince Dean NOT to say yes to Michael. Dean yells and Sam seems to back down for a while.

Enter Cas! Cas is ALIVE! He’s in a hospital and he’s lost most of his angel mojo, so he’s forced to call Dean and ask him to wire money to travel. Cas is very sorry that he didn’t believe in Dean, going so far as to say that he isn’t ‘the burnt and broken shell of a man that [Cas] believed [him] to be’. Cas is so good with the apologies, isn’t he?

Again with the Green Stuff

The boys head off to Pestilence’s current location in Iowa and quickly take over the security office, trying to figure out which one is Pestilence. They finally figure it out as he seems to be disrupting the surveillance cameras (convenient, right?). They creep stealthily down the halls but are recognized by a demon who’s masquerading as a nurse. She warns Pestilence that they should leave because the Winchesters have a nasty habit of killing horsemen. He’s still wearing the gross green vomit. Ewww. Pestilence is none too happy that Sam and Dean have been killing his brothers and decides to use his powers of disease against them, despite the fact that Lucifer warned him and the other demons that the vessels aren’t supposed to be harmed.

The boys quickly catch any number of diseases while making their way to Pestilence’s room, including meningitis, scarlet fever and syphilis (ach, poor Dean!). Pestilence has them on the floor, coughing up blood and groaning and talking about the beauty of disease and the grossness of humans.

Then Cas saves the day! I love Cas. He enters the room, fresh off the bus, and immediately succumbs to the illness surrounding Pestilence. But he has enough angel mojo left in him to grab the demon knife and cut off Pestilence’s ring. Before he disappears, Pestilence warns the boys that it’s ‘too late’. The boys are immediately healed but are worried. 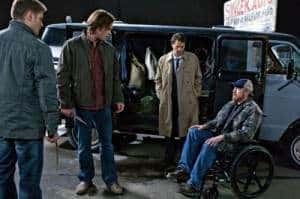 Everyone heads back to Bobby’s house to brainstorm how to find Death and worry about why Pestilence thought it was too late. Bobby reveals that Death will be in Chicago and that he plans to lay waste to the city, killing 3 million people. Better not happen, because I love Chicago. I met Tom Arnold in Chicago one time. The boys wonder how Bobby knows this and Crowley arrives to tell them the good news – Bobby did sell his soul for Death’s location. Well, he pawned it, because Crowley intends to give it back. But not until he knows he’s safe and sound. The boys, of course, are more interested in whether Bobby kissed Crowley to seal the death. The answer? He did. Complete with tongue and an iPhone photo.

Out in the yard, Sam fully admits that he might be too weak to take on Lucifer and win. He’s also channeling Dean’s insecurity something fierce, because he thinks the others are far better men than he. Despite this, he thinks this is the only plan. Crowley disrupts the moment with news that Niveus Pharmaceuticals will be shipping its swine flu vaccine across the country – the vaccine that is actually the croatoan virus.

Also, you know the commercial with the ‘O Death’song? The one where you see Death walking down the windy street? Yeah, that’s right in the middle of the episode. I don’t remember another time this show has done a scene like this – all slow motion with loud music. It’s cool, it just seems out of place. The point is that Death is strolling down the streets of Chicago, picking off douchey businessmen who bump into him. 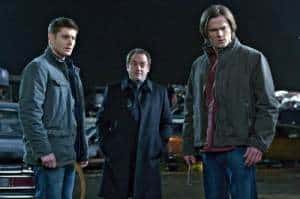 The group decides to part ways – Crowley and Dean are heading to Chicago to get Death’s ring, while Sam, Bobby and Castiel will try to stop the croatoan virus at Niveus. For all the love between the brothers, they really suck at potential ‘this is the last time we might see each other alive’scenarios. Well, mostly Dean. Remember when he had nothing to say to Sam before they faced Lucifer back in ‘Abandon All Hope’? It’s pretty much the same here. Sam reminisces about simpler times and then Crowley hands Dean a scythe that can supposedly kill Death.

And then Crowley gets super-helpful. As it turns out, he decided to be a nice crossroads demon and returns Bobby’s ability to walk as part of his deal. Bobby and the boys are elated about this turn of events, as am I. Because Bobby is back, yo!

In the truck, Cas thinks Sam’s crazy plan might have some merit. He thinks that Sam might be able to resist Lucifer and delivers the news that Michael has ‘found another vessel’: Adam. But Cas warns him in order to take in Lucifer, Sam would have to drink gallons of demon blood.

Bobby, Sam and Castiel converge on the Niveus warehouse and have to come up with a contingency plan once it’s revealed that the shipment is leaving earlier than they thought. Said plans involves infiltration with guns. Sam and Bobby enter the warehouse and pick off the croats while Sam continues to help the civilians escape. It’s no secret to anyone who knows me that I’m a total Deangirl, but Padalecki looked hot shooting the Croats in the warehouse. Seriously, honest-to-God, HOT. Eventually the trio manages to destroy the virus.

Dean and Crowley arrive in Chicago, but encounter a false start. Turns out Crowley was wrong about Death’s exact location. Fortunately, he manages to accidentally find him in a pizza parlor while they reconvene at the car. 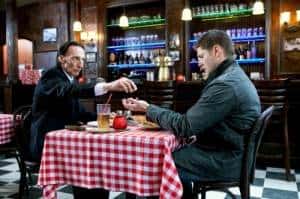 Death is a Guy Who Eats Pizza with a Knife & Fork

Seriously, I don’t care how deep dish your Chi-Town pizza is, you don’t eat it with a knife and fork. And then Death even got Dean to do it too!

Dean’s plan to quietly enter the restaurant doesn’t end well. Death is far too good for Dean’s reindeer games and quickly takes the scythe back from Dean and invites him to join him for pizza. And thus begins a peculiar conversation between Dean and Death. We learn that Death is the oldest of all the horsemen – possibly even older than God. And he’s convinced that one day he will reap God (will God die if no one believes in him – like if people stop clapping around Tinkerbell?). Death is also pretty damn insulted that a mere mortal like Dean is attempting to kill him or question his motives.

Oh yeah, and Death’s super pissed that Lucifer has somehow managed to bind Death to his will. One of the oldest entities in the universe is none too pleased about being bound to a fallen angel who’s pissed at Daddy and his brother. Therefore, Death agrees to a deal – he will give Dean his ring in order to trap Lucifer again, as well as instructions on how to do so. In exchange, Dean will swear to do ‘whatever it takes’to defeat Lucifer – including, but not limited to, allowing Sam to say yes to Lucifer. Dean agrees, but Death warns him not to make false promises, otherwise bad, bad things will befall him. Oh, Dean.

Dean is back in Bobby’s yard, playing around with the four horsemen rings, which have magnetic magical powers. Bobby joins him, still thrilled to have his legs back. Dean realizes that he made Death a promise he never planned to keep when he agreed to use Sam to defeat Lucifer. Basically, Dean is screwed six ways from Sunday – he has to kill Lucifer, might potentially lose his brother and lied to Death. Bobby tells Dean that he thinks they may be too hard on Sam and that he might be more capable of defeating Lucifer than they thought. He wonders what Dean is more scared of – losing the war or losing Sam. I suppose this is meant to scare Dean into action. It just makes me sad. What a horrible choice for Dean to face after a lifetime of horrible choices.

Just before the brothers parted in Bobby’s salvage yard, Sam asked Dean ‘remember when we used to hunt wendigos….how simple things were?’Dean claims not to remember (then again, he does have an extra 40 years on Sam after his stint in Hell), but the rest of us certainly do.

The real question fans have been asking themselves is what will happen in season 6. Once the apocalypse is finished, where will the show go? The likely guess is that the show will sort of reset back to the season 1 format – with the brothers hunting monsters-of-the-week again. The question with that is whether the season will have an overarching goal. Even seasons 1 and 2 had goals – the search for John and the Yellow-Eyed Demon. So what’s next for the brothers? We might not know until September.

Overall, this was a pretty good episode. Two horsemen were confronted, Cas returned, Crowley returned and Bobby was back to his (somewhat) usual smiling, though gruff, self. The thing is, they seem to be leaving a lot for the boys to deal with in the season finale next week, don’t they? How can they possibly manage to stop both Lucifer and, likely, Michael, as well as the apocalypse all within an hour?

View photos from the season finale of Supernatural, which will be airing next week on May 13.