Home
Television
Supernatural
Supernatural 8.21 Review: The One Where Sam Pulls a “Don’t You Know Who We Are?!” 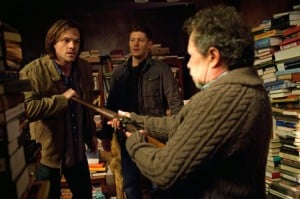 At exactly the mid-way point of this week’s Supernatural, I took a step back and thought “this doesn’t seem like a classic Ben Edlund episode”. The first half was a bit choppy, with a great deal of set-up (although, it had a few stand-out moments) that seemed to drag. I’m happy to say that after the half-way point, the “The Great Escapist” perked up considerably and delivered moment after moment of action, interesting backstory and a few surprises. While I wasn’t crazy about the first half, the second half was engaging, fun and pushed the story right along, complete with a few trademark Edlund lines and some terrific performances by all of the main and recurring stars.

Clever, clever Castiel. It turns out that Cas has been utilizing a very interesting tactic in his attempts to escape Naomi and her henchangels: he goes from Biggerson’s restaurant to Biggerson’s restaurant. Because they’re basically identical (with only the outside scenery changing) the angels can’t figure out which restaurant he’ll be at next. But Naomi is approaching desperation and so she comes up with a new plan: slaughter the Biggerson’s customers until Castiel is forced to stop. We revisit the first restaurant we saw him in and, in a horrifying scene, Castiel sees bodies lying dead on the floor, with the nice waitress who had served him repeating that he should “stop” while her eyes have been burned out. Castiel’s connection to humanity makes him pause, giving Naomi the moment she needs to corner him.

When the angels can’t find the Angel Tablet in one of the other restaurants, Naomi starts getting frustrated. And then a curious thing happens: she spills some secrets. She recounts the angels’ slaughter of Egyptian first born sons, telling Castiel that the angels had done far worse. The problem is that Castiel cannot remember this. Why? Because angels like Naomi have wiped his memory. From what I gleaned from the information, there are a group of higher-up angels, such as Naomi, who have essentially perverted the idea of what it was to be an angel. Free will was never in the cards for angels, because angels like Naomi never gave them the chance to experience it. Angels like Castiel have been controlled and manipulated to serve the purposes of whomever was in charge, often committing terrible acts. But Castiel has always been an anomaly, even before he came to know the Winchesters. “You have never done what you were told, not completely. You don’t even die right,” Naomi bemoaned about Castiel.

Enter Crowley, who cleverly melted down an angel blade to create bullets. He takes out one of Naomi’s henchangels and then scares her away as well. He tells Castiel that he’s had one angel (Ion) on the payroll and then proceeds to question Cas himself about the location of the Angel Tablet. The thing is, Crowley is what Naomi is not: an out-of-the-box thinker. They may be equally as cruel in some respects, but Crowley has survived far longer on his own wits, and so he quickly realizes that Castiel has hidden the Angel Tablet inside of himself. What’s curious is that Crowley believes – as many of us do – that touching the Tablet is what gave Castiel the power to break away from Naomi’s control. By keeping the Tablet inside of himself, he never stopped touching it. Crowley removed it, but does that mean that Castiel is once again susceptible to Naomi’s control? 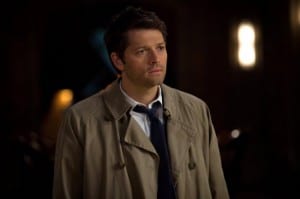 Crowley was called away to deal with Kevin (more on that soon), and Cas was left with the angel who had betrayed them all: Ion. He bemoaned that they’ve always been controlled and none of it really matters, but Castiel has a different opinion and this is why he’s always been a difficult angel to control…why he was the angel who connected easily with humanity through the Winchesters: because it all matters to him. The choices that the angels make – or the blind orders that the other angels follow – affect humanity. It all matters. He manages to dig Crowley’s bullet out of himself,  takes out Ion and then escapes.

Not Breaking a Second Time

Going back to the beginning of this week’s Supernatural for a moment…we had Kevin on Garth’s boat, attempting to decode Crowley’s piece of the Demon Tablet that the Winchesters had just brought to him. But fans must have immediately suspected something was strange, because hadn’t Kevin just disappeared? It turns out that Crowley had put him on a replica of a boat and sent two demons in to “play” Sam and Dean. Crowley had quite a few standout lines and facial expressions in the first half of the episode as he “directed” the attempt to get Kevin to spill about the Demon Tablet.

Back in the Men of Letters cave, Dean was tending to a sick Sam when they received an automated video email from Kevin. It turns out that he programmed it to arrive if he didn’t input a code each week and since he disappeared, it was delivered. It was essentially a goodbye and an admission that he must have been killed, but he left Sam and Dean with all of his notes to finish the trials. The thing is, as despondent as Kevin was in that video, he assured Sam and Dean that he wouldn’t “break a second time”. This time, he planned to let Crowley kill him without giving up any information.

As fake Sam and Dean hung out with Kevin on the boat, the boy proved his smarts. He quickly realized the boys weren’t real and sent them off to a Devil’s Trap. When Crowley found out he blew off the door and strode in, but Kevin calmly ate his BBQ. I’ve literally never loved Kevin more than I did in this scene where he calmly told Crowley to go to Hell. Crowley may have the Angel Tablet, but Kevin literally has no intention of breaking this time and he’s prepared to let Crowley kill him. Kevin is amazing and is currently going neck-and-neck with Chuck for the most awesome Supernatural prophet ever. But then, there’s a brilliant white light and….