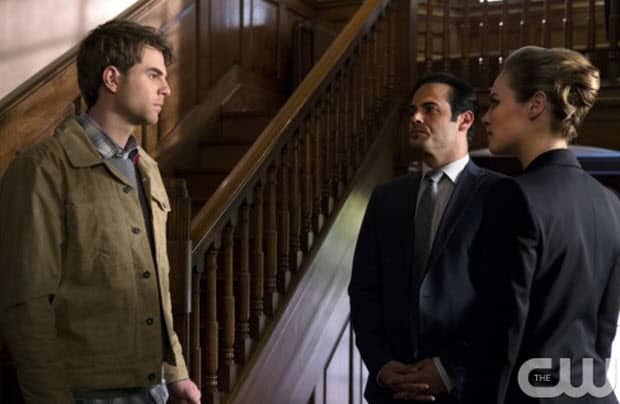 Okay, what in the hell was that?

Tonight’s Supernatural has the unique distinction of having so much potential and yet being so contrived that I could barely watch at times.

I’ve seen every episode of this show, many of them more than twice. I’ve been a live watcher since Season 7. I’ve participated in the fandom to a unhealthy degree. Hell, I’ve even written embarrassing fanfiction (which none of you will ever see, hopefully). My point is, I know this show, backwards and forwards. And this episode was awful. It was wasted. I mean holy shit, guys.

The episode that ran tonight was supposed to be a backdoor pilot for a Supernatural spin-off called “Supernatural: Bloodlines.” It’s set in Chicago, and Chicago is run by five monster families. Those families are the Djinn, the Vampires, the Werewolves, the Shapeshifters, and the Ghouls. They keep the peace and the human casualties to a minimum and life just goes on as usual. It has loads of potential; for example, these monsters have carved out a niche for themselves in world that does not belong to them. The control a major American city, in totality, in near total secret. They are not the things that go bump in the night; some of them cheat on math exams and take the train. It’s a totally different perspective on the monster-ology of the show and it was totally f’ing wasted. I want to just yell out curse words to the bloody heavens and rage because it HAS SO MUCH STORY TO TELL. And god did they pick the most uninteresting parts.

Like, real talk, they packed like a full season’s worth of plot into one episode. Nice work not learning the lessons of television’s Golden Age, Supernatural; thanks for acting like an episode of Dallas’s ninth season. It tried to hard to establish motivations for its main characters that it ate itself. It literally ate itself. By the time we got to the end of the episode it was already CONTRADICTING FACTS IT’D PUT IN LIKE THIRTY MINUTES BEFORE JESUS CHRIST. I’m not saying every show has to be like Mad Men or Breaking Bad in its slow-burn storytelling, but nor does it have to be like this.

God. I’ll never get that hour back. Let’s get this over with.

The episode starts off with the character of Ennis. He’s out with his girlfriend whose name I can’t even remember. He’s going to propose to her which is obvious from literally the very first second of this episode. He goes to talk to a waiter or manager or something; I have no idea. He asks this person of importance to put the ring in a glass of champagne, and is rebuffed. Two other customers with more importance come in and Ennis catches a glimpse of the bodyguard archetype’s messed-up face in a reflective surface. The second guy is named Sal Lassiter, and after being taken to a Monster VIP Room (as Ennis calls it later, eliciting looks of wondrous appreciation from Sam and Dean for some stupid dumbass reason I haven’t been able to ascertain), he gets into a scuffle with Julian, a werewolf. Now, Sal is a shapeshifter, and the ‘shifters hate the ‘wolves, and vice versa. Sal tries to play it off like he’s just trying to get a drink, and apparently he is? He and Julian get into a tussle and are split up. Soon after, some faceless dude with claws comes into the Monster VIP Room and murder literally everyone. This is so stupid that I can’t even type it properly. The killer in this episode is just a regular human posing as a monster, with regular strength and silver claws. How was he able to kill every monster in the room? Are they all wasted? Too honorable to sneak up behind him and, I don’t know, DISEMBOWL HIM?!?!?!??!?! THERE’S VAMPIRES AND WEREWOLVES AND DJINN AND ALL SORTS OF SHIT AND THEY CANT KILL A HUMAN WITH SHARP BRASS KNUCKLES God I don’t want to relive this awful episode. Appreciate me.

Blah Blah Blah Sal escapes even though it makes no sense and comes across Ennis who is trying to shuffle his girlfriend out of the restaurant. He is in the middle of his proposal when Sal stumbles out. The human-monster-killer guy follows him out and goes out of his way to THROW Ennis’s girlfriend against the wall, which of course kills her. ONCE AGAIN, HE’S JUST A DUDE. A SKINNY WHITE GUY. A SKINNY OLDER WHITE GUY. HE LITERALLY THROWS THIS WOMAN SO HARD THAT HER SKULL FRACTURES AND SPRAYS BLOOD AGINST THE WALL!!!!!! WHAT THE F ITS SO STUPID. Sal says something about being sorry about what he did to David and not having any choice. That comes up later and its as lame as it sounds.

Ennis is then questioned by his father’s old partner (he died in the line of duty, supposedly) and then by Sam and Dean. They do there usual song-and-dance and then they leave. But the perspective doesn’t follow them; it follows Ennis. This is the only interesting moment, and of course they ruin it. Ennis immediately goes to his father’s stuff and gets out of his gun. But, wait, whats this UNDERNEATH THE THING THAT I’M SURE HE’S LOOKED AT LIKE TEN ZILLION TIMES SINCE BUT HES JUST NOW NOTICING WOW LOOK SILVER BULLETS HOW RANDOM HOW DID I NOT SEE THESE BEFORE?!?!?!?!?!

David Lassiter is the brother of Sal Lassiter and he was trying to live life as a normal human but gets pulled back into the fold because Sal was killed and his sister is running the family because her father is sick and Margo (the sister) wants to kill Julian and the werewolves for killing Sal. David goes to investigate and comes across Ennis and Ennis and he fight briefly after a really expository moment in which David explains the five families and how they keep the peace. David drops Julian’s name (Julian Duval, for the people who care) and googles AND FINDS HIS HOME ADDRESS EVEN THOUGH HE APPEARS TO BE A REALLY POWERFUL GUY. WOW. THIS IS SO DUMB.

Ennis goes to the house and David is there too along with Sam and Dean (who Ennis saw again at a crime scene that I have no idea how he found out about). David talks to his former fiancÃ© Violet (who is a werewolf and the sister of Julian) and then they are attacked by the man-monster-killer guy and she is captured. Ennis saves the life of David (hooray) and Sam and Dean hustle them out of there and they all decide to work together.

They use Violet’s phone’s GPS to locate her (I never nitpick this kind of thing except the show already made a habit of not making ANY SENSE) and they go and investigate and Ennis goes with Sam (cause smart guy bond?!) and David goes with Dean (BROMANCE) and David is captured AND THEN IMMEDIATELY STRUNG UP IN CHAINS NEXT TO VIOLET. LIKE, SHE’S NOT EVEN UNCONSCIOUS, HER HEAD IS JUST TURNED AND YET SHE DIDN’T NOTICE CREEPY MONSTER-MAN-KILLER WHATEVER GUY STRINGING HIM UP. HOLY CRAPOLA. HOLY CRAPBALLS. HOLY MOTHER OF PEARL. ITS SO STUPID. Anyways he tortures David because he’s mad the monsters killeded his son like ten decades ago and he wants to start a monster war but flinches when Margo tells him that bazillion’s of people will die in the crossfire AND APPARENTLY THAT NEVER CROSSED HIS MIND AFTER SEARCHING FOR THE MONSTERS THAT KILLED HIS SON FOR A DECADE OR SO. Then, the dumbest thing ever: Violet gets mad at David getting tortured and breaks fREE OF HER CHAINS AS A WEREWOLF WHY DIDN’T SHE DO IT BEFORE?!?!?!?!? SHE HAS CONTROL OF HER POWERS. OH ALSO DAVID DOES IT TOO AS SHE IS MASSACRING THE GUY BECAUSE CHIVALRY AND NOT KILLING. Blah blah blah blah blah Ennis kills him the guy with a one-liner David rejoins his ‘shifter mafia family.

NOW, the worst parts: the dad who was in a coma suddenly wakes up and warns David that his sister wants war and that he has to stop her. No relationship build-up, no reason for his coma, no nothing. The dad exists for that scene only pretty much.

At the end of this crapfest (after Sam and Dean have fled to capture Metatron or something stupid) Ennis is looking at the monster-man-killer guy’s board where he had all his research on the monsters who killed his son and then he gets a phone call and its his long-dead dad warning him to stop hunting monsters or they will kill him and click! Phone goes dead. Plot contrivances. This was awful.

I need a tums. See you next week. 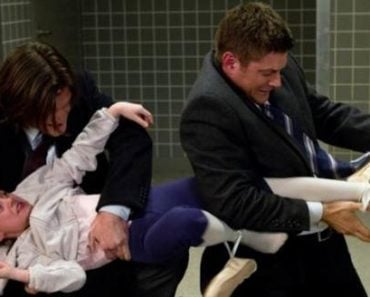 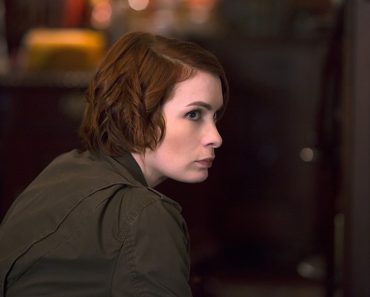 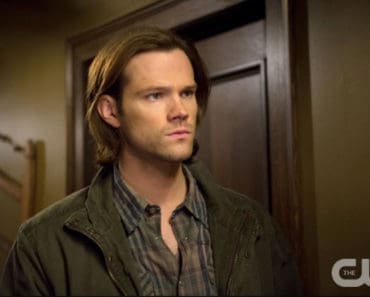 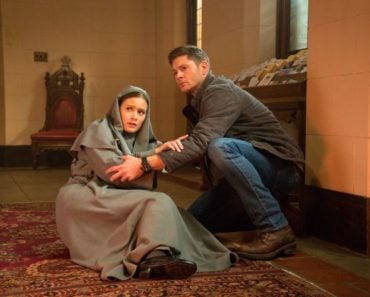 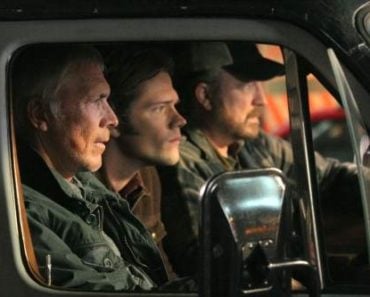