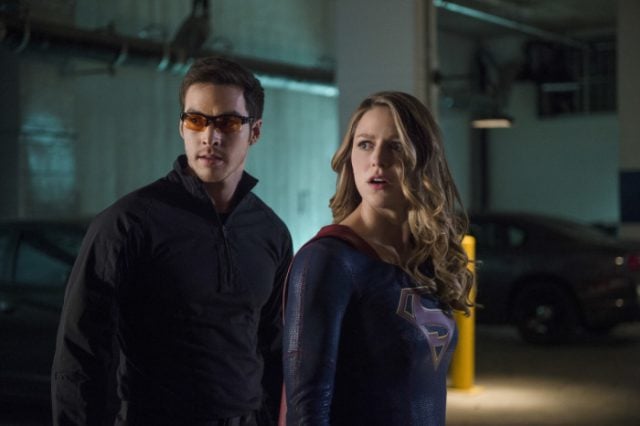 Supergirl has always centered on the character of Kara Danvers, and since she’s the titular superhero of the series, that’s how it always should be. However, over its first season and a half, Supergirl has tried to split its focus in a couple of different episodes, paying more attention to the supporting characters and their issues instead of continuing to shine the spotlight on Kara, and more often than not, it doesn’t turn out so well, leading to some of the show’s least satisfying hours. Unfortunately, “We Can Be Heroes” falls into that category, as the installment spends most of its time on the problems facing Mon-El, James, and even Livewire rather than just letting Kara be the amazing hero that we know and love. Tonight’s episode certainly isn’t Supergirl‘s worst, and there still are a lot of redeeming qualities to it (especially everything involving J’onn and M’gann); however, the decision to focus less on Kara and more on the men in her life makes for a pretty dull hour of television.

So why is “We Can Be Heroes” so uneven? Part of it definitely comes from the fact that many of the episode’s storylines feel repetitive, even after major secrets, such as James’s identity as The Guardian, are revealed. For me, James has never been a character that has worked particularly well on Supergirl, partly because Mechad Brooks lacks a certain type of energy that I feel like the James Olsen persona needs and also because it seems like the writers have never been sure what to do with him. James spent so much of Season 1 as Kara’s love interest that he never really had the chance to develop his own identity as a character, and once Supergirl switched gears in Season 2, ending Kara and James’s potential romance and keeping them as friends, it felt like the writers didn’t know where to take his journey next so they had him suit up as The Guardian because no superhero show on The CW can ever just have one hero.

To be honest, I never fully bought into James’s need to be a hero, and his constantly smug comments to Kara about how great The Guardian is have only strengthened my distaste for this storyline, especially when Season 2 could have focused on James’s struggle to fill Cat Grant’s very large shoes at CatCo (instead we only got an episode or two about that). There was no need for him to try to be a superhero, just like there really ins’t need for Mon-El to be one either, but at least when it comes to Mon-El, I can buy into his motivation, which revolves around his romantic feelings for Kara. For James, though, his role as The Guardian has become his sole identity this season on Supergirl, just like how being a love interest to Kara was his only function last season, and it doesn’t allow him to have as many layers as the rest of the series’ characters, which is really a shame because a figure as important to the Superman mythos as James Olsen deserves better.

Now that Kara knows that James is The Guardian and still disapproves of his and Winn’s actions, it seems like Supergirl will be dedicating even more time to that particular storyline. While I can’t say I’m excited to see where it goes, I am grateful that there’s one less secret being hidden on a CW superhero show, and I am also hopeful that Kara now knowing the truth will help make James’s story a little more compelling. We’ll have to wait and see, though.

But it’s not just James’s heroic behavior that Kara disapproves of in “We Can Be Heroes.” As I mentioned above, Mon-El also joins Supergirl out in the field in this week’s episode, and while his superpowers make him good at beating up villains, they don’t help him listen to Kara. She tells him to make protecting the human lives his main priority, but he always disobeys his orders whenever he fears that she may need help.

And that’s because saving the innocent people of National City will never be Mon-El’s main priority as long as Kara’s life is in danger, and he admits that to her in the episode’s fantastic final scene, revealing that he not only remembers their kiss but that he could have died peacefully knowing that he had finally kissed her. Chris Wood and Melissa Benoist act the hell out of their last scene together, which is romantic and sad and hopeful all at the same time, but similar to how I feel about Kara learning James’s secret, I am just happy that the truth about Mon-El is out there now and am also interested to see how his and Kara’s relationship changes now that she finally has confirmation about his feelings. Everything else between them in this episode is pretty standard Kara/Mon-El stuff: fun banter, sweet exchanges (how wonderful was the “comets” line?), and predictable disagreements. But again, like the material with James, it all feels a little bit too repetitive to really make “We Can Be Heroes” a truly entertaining installment.

The one storyline that is the true standout of “We Can Be Heroes” is J’onn helping to save M’gann’s life. It’s been a while since we’ve seen the two of them interact, which is maybe why their material feels a little bit fresher than the storylines involving James and Winn and Kara and Mon-El, and there’s also a rich history and emotional weight to this story that the other two of the night severely lack. In order to break M’gann out of her life-threatening state, J’onn must bond with her, which forces him to not only confront the pain he feels over the death of his family and his race but also to forgive M’gann for the crimes she committed as a White Martian. That alone would make for a powerful scene, especially given the incredible performance that David Harewood delivers, but it’s the fact that J’onn isn’t able to forgive by himself, that he needs the strength of Alex and Kara by his side, that makes this story so special. In order to truly accept the loss of his Martian daughters, J’onn embraces the love of his “Earth daughters” and allows them to show him the beauty of forgiveness. That’s just marvelous storytelling.

However, there’s already a major threat to J’onn and M’gann’s newfound happiness and friendship, as she reveals to him that it was a psychic attack from the White Martians that almost caused her death. Now that they know that she’s alive on Earth, they’re coming for her. Judging by the promo for next week’s episode, it doesn’t look like we’ll have to wait too long for the White Martians’ arrival, and hopefully, the battle with these alien villains will lead to a more consistent and satisfying episode than “We Can Be Heroes.”

What did everyone else think about this week’s episode of Supergirl? Did it leave you wanting more? Comment below and let us know.

Supergirl Season 2 Episode 10 Review: "We Can Be Heroes"

Mon-El and James try to prove to Kara that they can be heroes, and Livewire returns in an uneven episode of Supergirl.