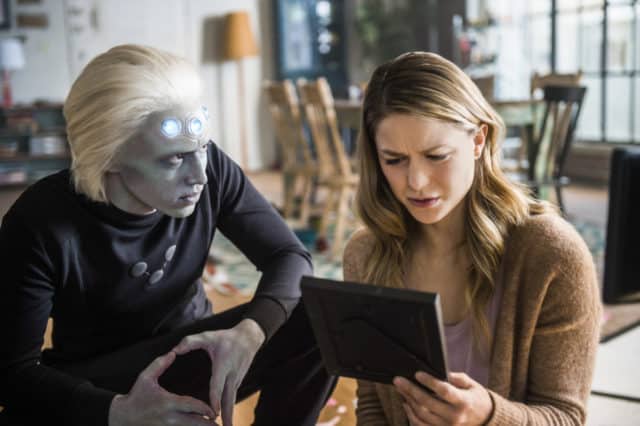 Supergirl returned this past week with its first episode since the girl of steel faced off against her toughest opponent yet; Reign. The show has been progressing nicely this season but did not shy away from displaying just how tough of a villain Kara will be up against as the show dives into the second half of season 3. “Legion of Superheroes” comes back with Kara stuck in a coma after her battle with Reign, which leaves the rest of Supergirl’s characters left to adjust to her absence and see if they can fend off Reign’s aggressive attack on crime.

This episode really dives into some interesting concepts, mainly Kara’s internal struggle that forces her to deal with her failures and the mountainous feat she has ahead. Her internal exploration introduces Supergirl’s newest character and member of the Legion of Superheroes, Brainiac-5 (JesseRath), who is a fun addition to the show. As Brainiac-5 helps Kara explore how she can break out of her mental prison, there is an interesting fascination that the character shows, seeming tamely excited to be in Kara’s presence at all. Supergirl has built Kara up to be a great hero, and introducing this connection to the future is beginning to reveal how much she will accomplish. As the character faces a situation that seems impossible to overcome, it feels like this positive reinforcement will help her immensely as additional motivation to remind Kara of how much people look up to her.

The idea could just as easily do the same for the members of the DEO and her friends. They face no easy task either, learning how to navigate the temporary world without Supergirl. While there are other options, it is an interesting premise to see how everyone steps up to challenge Reign. The DEO will need to get crafty, which is attempted in “Legion of Superheroes,” but their efforts are quickly shut down, showing the full power of the villain. Defeating Reign will obviously take more than one powered-person, which is what the show’s title teases viewers with. The Legion of Superheroes was introduced with the re-emergence of Mon-El, who has started the group in the future. There are still plenty of pods on his ship, implying that the rest of the team will eventually make an appearance when the final showdown with Reign happens.

However, this is where Supergirl has its one misstep in the season’s return from the midseason break. “Legion of Superheroes,” feels like a return episode that gives viewers a bunch of filler and setup. This is not a bad thing because, on one hand, it quickly establishes that to overcome this threat, the characters are going to have to dig deep to outsmart Reign. They won’t be able to get away with simple counter ideas like throwing kryptonite chains onto her. Yet, despite the title of the episode being “Legion of Superheroes,” the show felt like it revealed its future plan, without delivering on it right now. Mon-El spends the entire episode avoiding confrontation with Reign because he does not want to impact or change the future timeline; yet, when push comes to shove, he eventually folds on that idea and suits up with his wife and Brainiac-5. Eventually, the whole team has to wake up from their pods, and the Legion of Superheroes will have a defining part of this season’s climax.

Altogether, “Legion of Superheroes,” delivers a nice and balanced return to Supergirl with great moments and fun development. While the episode as a whole can feel a little slow and as though it’s stalling, it presents the ideas and themes that the second half of the season will dive into. At the end of the day, Supergirl comes back to the idea of family and doing what’s necessary for the greater good. This is what helps Kara break out of her mental prison, and utilizing her friends, family and team will hopefully be what propels her to defeat Reign!

–  Very cool seeing Reign’s full potential in this episode. I am pumped to see everything she can accomplish moving forward. The ice ball she creates on Mon-El is pretty sweet.

– Brainiac-5 is so much fun, I love having this character on the show, it was a great choice and the Legion as a whole is such a great aspect for Supergirl to play around with!

– Happy to see Mon-El and Kara beginning to get along again, it won’t be easy but I’m excited to see how the show tackles Kara handling these emotions.