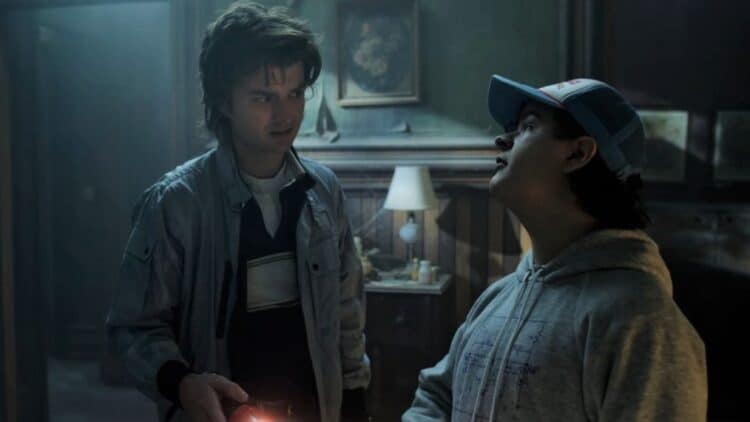 Who remembers the 80s and what the decade was like? Stranger Things season 4 dives deeply into the decade to bring season 4 back yet again. One has to remember that season 3 had already stepped firmly into the 80s, but this current season went full-bore yet again in an attempt to get people into the story once again. If it wasn’t bad enough that the Upside Down had invaded the world more than once, this time it was being assailed from within the Upside Down by a creature that didn’t even need to cross the barrier. Instead, this creature was able to reach across the barrier in a manner that not only created new gates, but can kill without being present, as he draws his victims into the Upside Down kind of like Freddy Krueger, and then kills them in the most grotesque way possible. The funny thing about this season is that a lot of questions did get answered, but even more were brought to light, such as why and how Dr. Brenner is still alive. That should be a big question mark, right?

The show kind of glosses over this as it moves on, or rather moves back and forth between 1979 and the present day, when Dr. Owens, once again played by Paul Reiser, is seen taking Eleven to an underground facility to regain her powers. This is when Brenner is revealed, and more of Eleven’s past is revealed as it’s shown how her early days under Brenner’s tutelage went. To say that Brenner’s teachings were brutal isn’t entirely fair, but to say that Eleven was the outcast is stating the obvious, since for some reason her peers didn’t regard her with anything save scorn, and it was made evident that she was one of the most powerful of the bunch. The fact that Brenner punished the others when they hurt Eleven out of jealousy didn’t really help.

This season did a lot of jumping back and forth between the past and the present to show a little more of Eleven’s story, and in doing so it created a great explanation of why the Upside Down became the threat that it did. The reason that this happened is kind of interesting though since learning of how Eleven became capable of thrusting people into the Upside Down, and the fact that it was essentially formless, opened up a big part of the story since it makes sense now to think of how the alternate dimension came to be. In the meantime, the group hasn’t exactly come back together since Mike, Will, and Jonathan are will Eleven, along with Jonathan’s new buddy Argyle make up one group, while Max, Lucas, Dustin, Steve, Nancy, Robin, and new guy Eddie are big parts of the other group. As for Hopper, he’s still in Russia while Joy and Murray, the eccentric sidekick/scientist are attempting to rescue him. To say that season 4 became kind of a hectic run from one side of the world to the other is fair, but it’s also easy to state that it was entertaining since it sounds as though this season is leading into the final two episodes, which will likely be it for Stranger Things unless a season 5 comes along.

How much longer this show is going to last is a little uncertain, but at the very least it could find itself coming back if the fourth season is received well enough. It does feel that things are winding down at this time though, which would be a bit sad to be certain, but also kind of expected. From the beginning to the current point in time, Stranger Things has been delivering one shock after another in some of the best ways that have kept people guessing and wondering what could possibly happen next. It was interesting to see how Hopper survived and how he eventually wound up in Russia since a couple of theories had been floated at that point, but nothing ever appeared to stick, unless it had something to do with Hopper simply surviving the blast somehow. But his time spent in one of the worst Russian prisons makes it apparent that he’s far tougher than people have realized.

There were a couple of important things to note in this season that tripped people up on the way to the season’s premiere, such as the belief that Max now has powers (she doesn’t) and that Vecna is a being that, much like the Mindflayer, is a being that originated in the Upside Down (he didn’t). But this does raise more questions, such as where the Mindflayer came from, and what does that mean for any and every creature in the Upside Down. Are they all products of the real world that became stuck, or are they dreams that were made real? It’s hard to say, but hopefully, this will be addressed somehow before the show is over and done with.