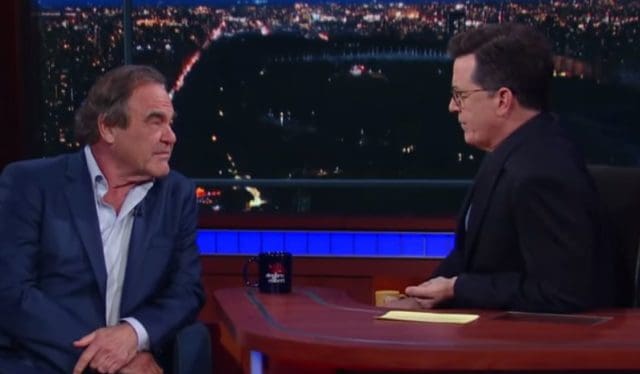 As usual Stephen Colbert did a solid job on The Late Show last night.Â  His monologue was fine.Â  His making fun of Donald Trump was the stuff we’ve all come to know and love.Â Â  His interviews with Uzo Aduba and T.J. Miller were excellent.Â  If there was anything that would go “wrong” it’d be T.J. Miller just because Miller is so unexpected all the time.Â  But hands down the weirdest and most painful moments were during the Oliver Stone interview.

Oliver Stone absolutely tanked the episode at the end. He had to know Colbert was going to want to get his personal opinions but he just kept on deflecting to the weird position of “I think you just need to watch the interviews yourself.”Â  Did he not realize he was there to sell people on the show? He literally couldn’t come up with any interesting things that people would want to tune in for? He wouldn’t even comment on his personal thoughts on Putin.

Who the hell knows what Putin told Stone in close quarters but this was very very weird.Â  I think the best response to the weirdness was from a weird guest himself:Â  T.J. Miller.Â  Miller sent out a bunch of tweets that have since been deleted but of course you can see them here.

Check out the awkward interview below: