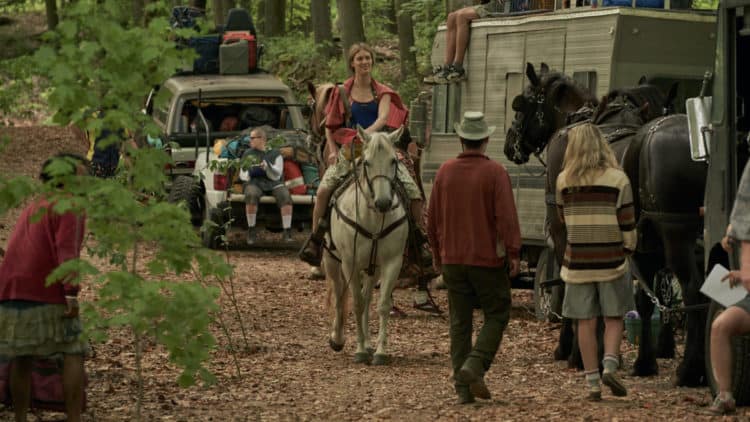 On Station Eleven Season 1, Episode 7 Kirsten reconciles with her past while on a subconscious journey after being hit with a poisonous dart. Kirsten’s older self comforted the younger her as she glided through the first few months after the flu ravaged the world. We saw firsthand the beautiful bond she had developed with Jeevan and his brother Frank. These memories were crucial to Kirsten’s story because the Chadhuray brothers are big part of the pain and loss she carries. On Station Eleven Season 1, Episode 8 Kirsten wakes up from an unconscious state after being nursed back to health by Tyler aka The Prophet. It’s pretty ironic how the plan was to save The Prophet so that she could save her crew, but it’s The Prophet that ends up saving her. The Prophet and Together they finally make it to Sevren City Airport the home of the infamous Museum of Civilization. At the airport, nothing but the year has changed. Clark, Miles, and the beautiful Elizabeth, all donning realistic aging makeup, are still running things at the airport. When Kirsten and Tyler make it to the airport, Miles still providing security catches them lurking around the perimeter. They claim to be actors in the Traveling Symphony.

As Miles drags them through the airport to take them to Clark, Tyler notices how much things have changed. Miles was successful in installing the solar panels because the entire airport has electricity. Compared to the outside world, Sevren City Airport is paradise. They have running water, support groups, and a Karaoke machine. Kirsten and Tyler pass Clark’s smell test by acting out a scene from Station Eleven. Kirsten’s paranoia and need for control are fueled by The Prophet’s warnings about the place and she tries to convince the crew that they are being held hostage by Sarah and the Museum of Civilization. Tyler and Kirsten become accomplices as they sneak through the airport’s air ducts and jetways to find out information. Kirsten finds Sarah in the medical facility and promises to get her out safely, but even in her poor state, Sarah manages to tell Kirsten that she’s in no condition to go on the road. Kirsten and Tyler head out to the airfield, where he bares his soul to her and reveals the bloodshed he experienced at the airport as a child. Kirsten admits that she knows who he really is. Tyler encourages Kirsten to go back and rejoin her crew and sets out to burn down the Museum of Civilization, a monument created to honor the passengers of the flight that was denied access to the airport during the flu outbreak.  Tyler recalls the day he tried to help one of the passengers that survived and the man was shot to death right in front of him. The whole monument and museum is a crock of bull, Tyler setting it ablaze was an act of revenge.

For Clark, the Museum of Civilization was more than a passion project, it was an ode to “before world”. Clark is beyond obsessed with the museum and he doesn’t hesitate to risk his life by saving it. By now, Elizabeth’s suspicions are confirmed, she knows that Tyler is her son. The show cuts back to three weeks before the flu outbreak. Clark and Arthur Leander reunite, but their relationship isn’t what it used to be. The tension between the two friends is thick and it’s clear that they are frenemies. Arthur, the famous movie star, turned theatrical God,  sits on high on his pedestal as he criticizes Clark for selling out and taking a job as a CEO as if, Clark not making in entertainment was his fault. Arthur ridicules Clark for losing his passion for creating art just for the sake of creating. Arthur was a bad friend. He suggests they celebrate at the bar despite the fact that Clark is sober and he even conveniently forgets the name of Clark’s boyfriend. Clark and Arthur’s fights are vicious because they know how to push the buttons that will each other the most. The end of the world allowed Clark to reclaim his love for the arts. The Museum of Civilization was art that really matter. To have it taken away in flames was the worst punishment ever. Is it a coincidence that Arthur Leander’s son is the one that took it away from him? After a heartfelt reunion with Elizabeth, Tyler brings Kirsten to see Sarah. Sarah’s in pretty bad condition. Fortunately, Kirsten gets a chance to say goodbye to the woman that saved her life twenty years ago and gave her a purpose.