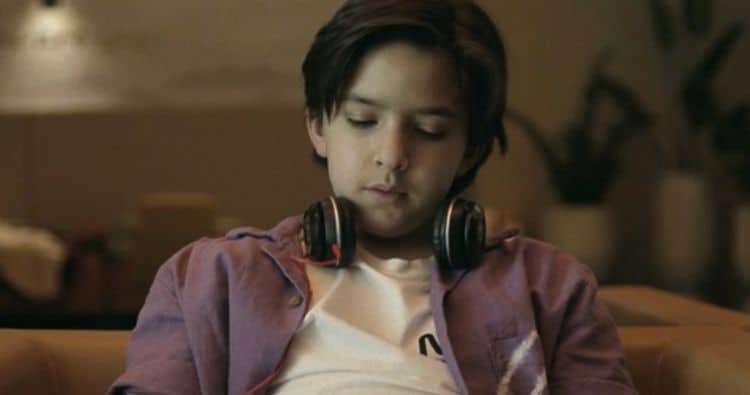 Station Eleven Season 1, Episode 5 takes us back to the first hundred days of the flu pandemic. Clark (Arthur’s best friend) and Elizabeth (Arthur’s estranged wife) and their son Tyler board a plane back to Chicago to make arrangements for Arthur’s funeral. Clark spots Elizabeth from Coach and attempts get her attention, but she’s all the way in First Class and doesn’t hear him. Tyler looks Uncle Clark in the face and turns around, refusing to acknowledge him. Ouch! The plane has a layover and they land in Michigan. Clark catches up to Elizabeth and Tyler. Elizabeth smugly tells Clark that she spotted him hours ago eating a pretzel before they boarded the last plane. Her disdain for Clark is obvious. At Severn City Airport, Elizabeth and  Clark find out about the flu that’s eating the city alive. It turns out that there are no flights out, everything has been delayed until everything blows over. Elizabeth is anxious to get to Chicago and since she tries to use her status as a C-list actor to book a private jet to Chicago. Clark tries to tag along knowing that aligning himself with the star could be advantageous.  This is typical Clark behavior. He became a trade consultant when his career as an actor didn’t pan out the way he wanted it to and as a result, he’s always been jealous of Arthur.

Apparently, Liz doesn’t understand the severity of what’s going on. Liz plans for getting a flight out of Michigan go up in flames. With no taxi cabs or rental cars available there is no way out of the airport. People start to fight over the remote control until Milton Barnes the security that quit his job an hour back, takes the remote and turns on the news. Outside of the airport, there is mayhem in the streets. The news reporter warns her loved ones to take the back roads and to be safe. Liz gives Tyler a copy of Station Eleven, a book that Arthur sent him weeks prior. Yup, here goes that book ago. We officially get our confirmation that there is another copy. Things get real when a plane full of sick people land at the airport. Clark seizes the opportunity to rise to power. He demands that they lock the doors and keep them out so that they don’t spread the flu inside of the airport. Miles the former security guard agrees to lock the doors. However, on Christmas Day a lone survivor steps off the airplane. Recognizing that the man must be immune, Tyler helps the man into the airport. The security guard ends up shooting the man in the head out of fear.  Tyler and Elizabeth are sent to quarantine for a month on an empty plane.

Tyler never quite recovers from witnessing the murder of the lone survivor. He should have been regarded as a hero instead he has been banished to the main terminal where he spends his days reading Station Eleven and trying to forget that there was ever a “before”. Tyler hated his life before the pandemic. His father was never there, his mother was self-absorbed and distracted by her career and his only friend was his nanny who ditches him for Miles the custodian. Clark on the other hand is adjusting well to the little community that he’s helped build at the airport. Clark collects artifacts around the airport to build a museum dedicated to the memory of the past called the Museum of Civilization. Clark hates Tyler he refers to him as a “destroyer” on the radio and Tyler hears him on the radio waves.  “It’s time for Tyler and Elizabeth to go, ” Clark vents to his dead friend on the radio one evening. As harsh as it sounds, Tyler has a lot of pent-up aggression and may be dangerous. The jealous feelings that Clark has for Tyler are undeniable. Perhaps he feels that there is a possibility that he could one day be upstaged by Arthur’s son.

Clark is phony, insecure, but in many ways, Tyler is just like his father. Unfortunately, both Tyler and Clark can’t exist under the same roof. Tyler doesn’t want to be where he’s not wanted. So he decides to fake his death by setting the plane full of carcasses on fire and faking his death. Tyler disappears into the wilderness shedding his former existence and leaving his mother with a broken heart. Tyler reinvents himself into The Prophet whereas Kirsten becomes the Protector.