Home
Television
Other Space
Other Space Season 1 Episode 1 Review: “Into the Great Beyond… Beyond” 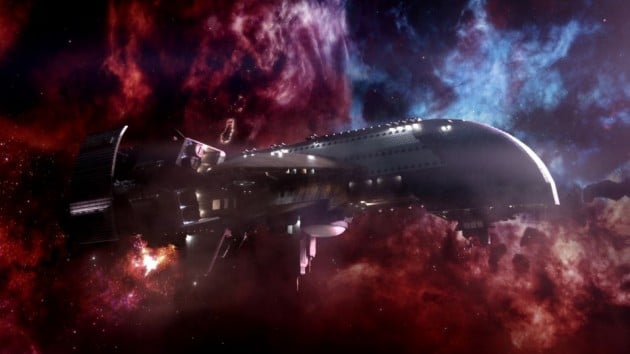 Other Space is one of those comedies that is so distinct from its first episode, it runs the risk of immediately endearing itself to viewers, or immediately turning them off from the show’s odd mix of homages to science fiction, B-movies, and classic young adult comedy. Typical pilot-friendly, predictable comedic beats are almost nowhere to be found, and the show’s premise morphs itself multiple times throughout the first episode, never really letting the audience nail down what this show actually wants to be (it also plays with reality quite a bit, which might be disconcerting for some people, particularly in the third act).

Ultimately, what holds it altogether is the show’s confidence: its own weird, hard-to-penetrate script, its mostly unknown cast of performers, and its location, stranded in what can really be considered the unexplored “other space” of television. Other Space is one of the more unique comedy pilots in recent memory – and although I’m a little hesitant to call it the next big thing not actually on televisions, Other Space‘s pilot sets up what could be a very interesting little cult comedy.

Other Space actually makes a very good companion series to Community: at its heart, it is a surrealist show about people trying to blaze new paths for themselves in life. Being younger and born in space, the characters of Other Space are less bitter and defined than the Greendale 7, even in the pilot, but the tenants of finding oneself amongst a group of weirdos in a world that bends the rules of time and space (literally) are intact in Yahoo Screen’s second original comedy (which is decidedly superior to their first, the uneven Sin City Saints). The associations stop here, of course – but going into Other Space with this comparison makes it a little easier to attach to what’s happening in the first and second acts, which suggests at a lot of stories and character development that isn’t addressed in the third act.

That third act dips as heavy into the show’s sci-fi underpinnings as I’d expect it to in its first season, when the naive Captain Stewart leads his crew of the Crusader (led by under-qualified navigator Tina) through a temporary wormhole, which leads to temporal displacements, hallucinations, and potential conspiracy plots (one of the character’s mothers is the president, after all). Plus, there’s a whole lot of other space-y material that really just serves as the background for an odd mix of Quark, Mystery Science Theater 3000 (there’s even an animatronic robot voiced by Trace Beaulieu, and Joel Hodgson co-stars as the ship’s radiation-afflicted engineer, Zalien), and any number of low-budget workplace comedies that have begun to spring up on various off-network channels and streaming services.

And there’s a certain charm and personality to it all. Even though Other Space really only has one scene that tries to express some sense of self-definition (and when it does, plays it up for parody) and a cast of malleable characters, the relationships between characters are well-realized, which paves the way for character exploration throughout the show’s brief first season (like Stewart’s former babysitter Michael, who goes through a whirlwind of promotions and demotions in the pilot). Part of this potential stems from knowing Paul Feig is behind the series; admittedly, Freaks and Geeks is one of the greatest five or six favorite shows of all-time, so I may be expecting more emotionally out of Other Space may want to offer. If all it ends up being is a quirky little bottle sitcom tinged with bits of sci-fi homage, I’m perfectly fine with that; however, the search for definition and curiosity of the unknowns of maturity (tenants of Freaks and Geeks) are certainly there – for example, Kent and his famous mother make a nice parallel to Nick, whose father similarly pushed him into following his footsteps. Add to that formula the wonderfully quirky (and surprisingly low-key) sense of humor on display in the pilot, and it’s easy to see the high ceiling for potential in this oddball space comedy, potential the pilot only appears to scratch the surface of.