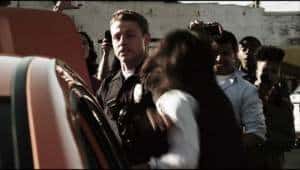 I really loved how the title was utilized during the “Underwater” episode of Southland. First, Ben was getting a piece of the local action and dove with her, revealing a great shot of them having fun under water. When Cooper and Tang found a naked man running down the street, he was doing it because he just felt a bit “under water” that day and needed to think. With the new captain in town all the P2s felt the heat and found themselves under water with the job. Pretty much every case and every cop found themselves drowning in one way or another. Brilliant title. 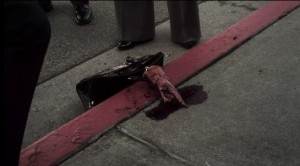 In a “there but for the grace of God goes I” moment, Cooper and Tang found a purse on the sidewalk with an arm attached. Detectives got to track down the vehicle involved and Lydia found a woman’s head lodged inside the hood of a silver SUV. The driver, under water fiscally and on his mortgage had just found a job, had a couple drinks to celebrate and drove home. Thought he hit a coyote. Cooper and Tang found out her husband definitely wouldn’t have argued the point with him, and laughed with joy at her death. It’s too bad they couldn’t use his reaction to help with the killer’s sentencing. The law just doesn’t work that way.

Lydia’s new partner is having a hard time with detective work. He lives in shades of gray, and can’t bring himself to punish someone who has already spent years behind bars for a false conviction. His reaction was understandable. The simple fact is none of us knows how we will handle a situation until we are in it. It’s easy to point fingers and say “I would never!” But, would we? Lydia is right, our system is flawed, but it’s the best we’ve got. That’s why it takes someone with a very special touch to protect and serve. In another shout out to the title, Lydia literally went underwater taking down the perp. The house and pool used looked a lot like the one in Lakeview Terrace, not that it matters. Lydia let Reuben decide for himself what would happen with the evidence by leaving him alone with it. I wonder what choice he made.

Captain Rutger is a hoot, isn’t he? The way he handled Granbo was pretty damned impressive. Who was she? Rifles, handguns, Kevlar and cats? Only in LA. I don’t recall the previous captain. Was he or she killed in the shooting? Speaking of the shooting, did you notice there was only the briefest nod to what had happened? That’s something that happens a lot on Southland. A story ends, and there isn’t a lot of explanation. Life goes on and so do the characters. While I do wonder what happened with Lydia’s old partner, for example, I don’t really care and not knowing doesn’t have any impact on my enjoyment while watching Southland.

Rutger got lucky that nobody was filming him with their iPhone, but Ben wasn’t as lucky when he clocked a school girl for slapping him. Sammy had his back, even though it wasn’t deserved. Something’s going on with Sherman. The pressure is getting to him and he’s not holding it back. If he doesn’t get it in check, he’s going to find himself under a lot more than scrutiny than being the “it” man on a YouTube video.

Dubbed The Walking Dead, Cooper and Tang brought down a giant guy together, earning her the new nickname of Wu Tang and leading Cooper to defend them with “walking dead my ass.” It’s a scene that would have played much differently had Cooper still been a physical mess. Together, the little gal with the feisty attitude and the big guy with the bad back can bring down monsters. Their partnership is developing really nicely, and if things play out as they have so far, they might even be friends. Since the show seems to be delving into a little bit of the cops lives outside of the job, this might be a fun friendship to see played out.

All in all another great, understated and powerful episode of Southland.