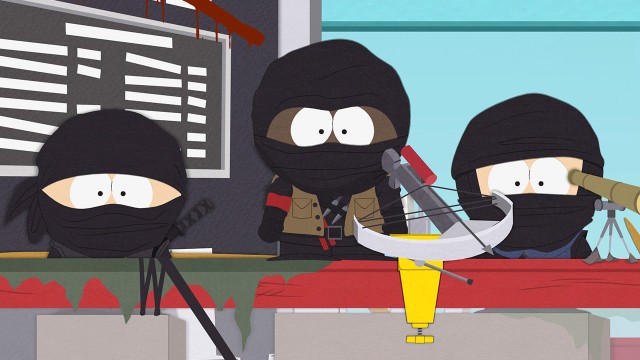 South Park has been doing a fantastic job with its criticisms about society’s sudden turn to promote political correctness. While the show is still able to draw plenty of laughs, Matt Stone and Trey Parker have been extremely fair in their representation of both sides in some compelling topics. Last night’s “Naughty Ninjas” takes somewhat of a step back from some of this season’s ongoing storylines and focuses on police brutality, which has been another hot cultural topic in America.

In previous episodes of South Park that have dealt with more touchy subjects, the series can easily go “too far” in some people’s eyes and stir up a lot of drama, which is what many expected last night. However, the show has, yet again, found a clever way to display the police brutality roller coaster. In the past couple of years, there have been many unfortunate police brutality cases, most notably the recent unrest in Ferguson after Michael Brown was shot and killed. While in some of these specific cases police might be abusing their power, it’s also not fair to assume that all officers are the same.

South Park has its own police problem when PC Principal calls in the local SWAT and police unit to scare Leslie after she has, once again, disrupted PC’s school-wide meeting. Being the lovable clumsy idiot he is, gold ol’ Officer Barbrady (yeah, remember him?) misfires and hits a six-year-old Latino-America student, causing outrage among the town and parents. They claim he’s not needed anymore and just can’t survive in this new age, which pretty much turns the whole town of South Park against the police in an amazing montage featuring some N.W.A..

The problem with the people in South Park is that they want the cops to keep doing their jobs while the community can still act super PC and go against them if they wish to. It’s a tough situation, because even in real life, we all need the protection from the police, but when they make one wrong turn, the public jumps all over them as a whole. South Park really nails this dynamic throughout the episode, because if we push too much, will the police just give up? Will anyone want to be an officer if they know criticism and harassment are lurking? It’s a tough dilemma.

Eventually, the town comes to the conclusion that they need the police to make the tough decisions. The kids decide to dress up as ninjas and make the abandoned SodaSopa their base. This unfortunately makes them look like ISIS members, and the town needs the police to handle the situation. I loved that the police actually stand up for themselves after being shunned and neglected by the town, especially because they started a luau class. This causes the town of South Park to realize they can’t have everything they want without compromise. While they need people to take care of the homeless problem and the looming threat of child ISIS, the police aren’t going to easily step into the trap of doing something wrong and having it blow up in their faces.

I really loved how South Park chose to approach the police brutality conflict. As always, the writers are completely fair, but their points are really well-rounded. Rather than spending the episode blatantly criticizing one side over the other, they choose to question what happens if we push too hard. While nobody likes to see unnecessary deaths, the police are the ones out there making the tough calls, and like everything else in the public eye, we can easily sit back behind our computers and criticize them without ever truly being able to empathize with the situations they are put into. Yes, some police officers do abuse their power, there’s no question about it; however, it’s equally as unfair to assume they are all like that, especially when we will still rely on them to do their jobs for our benefit.