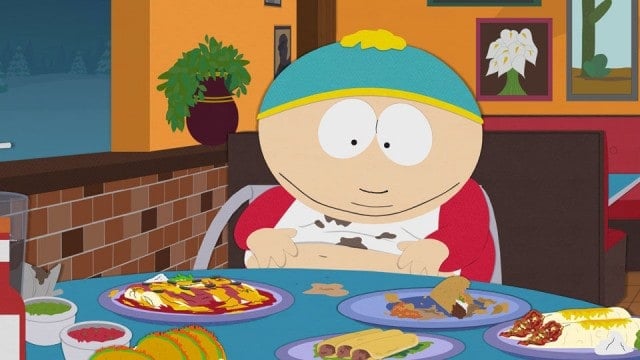 South Park has been gold throughout Season 19 so far, and it continued the same trend in last night’s episode, “You’re Not Yelping.” This week’s South Park really gets down to the core of Parker and Stone’s main argument from this season: they hate entitlement. Everyone has the right to express their own opinion, but there is a point where it goes too far. The internet has opened infinite platforms where people can agree on opinions, but people form such an elitist mindset that their entitlement gets out of hand. It happens everywhere nowadays, because everyone feels that not only do their views matter but that they’re more important than others’ opinion, whether it’s being overly PC, having radical political ideals, or even shopping at a Whole Foods instead of the regular grocery store. It can all easily go to people’s heads.

The show has done a great job of highlighting a couple of specific scenarios that it wants to touch on, but I loved this more generalized take on opinions going too far. The Whole Foods is up and running in South Park, and new restaurants have popped up in the surrounding CtPaTown area. As a result of this, people are going around as Yelp reviewers, exploiting the restaurants for priority attention and free meals in exchange for a good review. Of course, we first witness none other than Cartman carrying out this scheme, but slowly more and more people in town become Yelp reviewers. Having it open on Cartman was great, because I honestly believe he was doing this on his own due to his genuine surprise and disgust when the couple enters the restaurant.

The contrast between all of the reviewing characters is great. Cartman is a wildcard throughout the episode, but then you get people like Kyle’s dad, Gerald, who acts as thought he’s the Roger Ebert of Yelp. Each character automatically assumes they are better than you because they post reviews online. The restaurants finally stand up to all of the Yelp reviewers by refusing to treat them differently, which causes Cartman to start a war by rounding up the reviewers. The Yelp reviewer rampage was really goofy and felt like something out of Lord of the Rings because of how large the army was.

The final showdown between David and Kyle and Cartman and the Yelp reviewers was a phenomenal moment. It’s a complete David vs. Goliath showdown, but luckily, the reviewers are so full of themselves that they can’t work together. This is another one of South Park’s moments that sums up an entire point: when Kyle is standing there and addresses Cartman but his dad replies thinking Kyle was speaking to him. At this moment, Kyle says, “Every person here thinks this is about them,” and he realizes that the Yelp reviewers need to be the hero who receives the attention. Letting it get to their heads made them crave it all the time, which eventually causes their downfall. In the end, Kyle has the mayor give each Yelp reviewer a gold sticker that helps the restaurants to get their revenge in the end.

South Park always like to make statements, but in the end, the town always ends up reverting back to its originals ways. The town of South Park is a very materialistic community that needs to follow the latest trends in the country, which is what this season has been built on so far. I’ve absolutely how PC and entitlement have changed things, but this episode seems to have everything balancing out like normal. It will be interesting to see what trend pushes everything over the edge, causing the people of South Park to go back to their old ways.

“You’re Not Yelping” was another fantastic installment to this season, and I love the serialized trends that have been incorporated so far. Anytime South Park does something that changes the town physically it’s great to see them design these settings that are so foreign to the show. I’m expecting things to return to normal eventually, but I would like to see the PC and Whole Foods stick around for a little while longer if Parker and Stone can logically make it a part of the story.