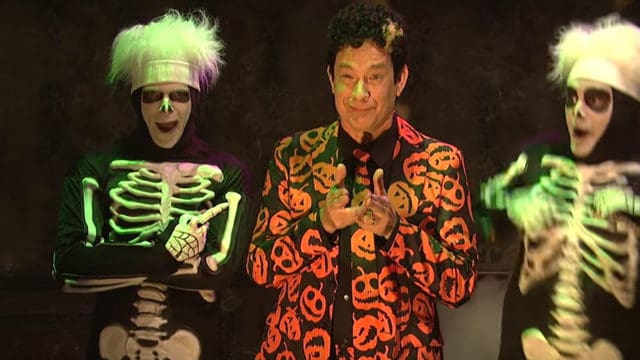 It was a dumb idea with a great actor that helped make David S. Pumpkins go viral. That’s it, really, the creators of David S. Pumpkin simply stated that it was a late-night, dumb idea that was brought up around Halloween and near election time to give people something to laugh at. Tom Hanks didn’t even want to do the sketch because he thought it sounded way too off from what SNL usually does. He tried to get out of it but eventually he had to don the pumpkin-covered suit and get his finger pistols read as his dancing skeletons suited up.

It wasn’t a great idea to be honest and yet somehow people locked onto it with a fervor that’s a little confusing. For those who, like myself,  couldn’t understand the inane craze with this character is was only possible to watch with mounting confusion as people actually started buying the costume that corresponded with the character. Stores actually sold out of the costume as everyone decided to jump on the David S. Pumpkin train for Halloween.

People are like lemmings in a way, or sheep if you really want to be mean about it. They tend to follow whoever seems to have the most infectious idea in their heads, or they follow the idea itself right off the lip of sanity and reason at times without a look backward or even a glance around at whey they’re doing it. David S. Pumpkin is just such a trend it would seem and the worst part about it is that the guy who did the acting and brought the character to life didn’t even want to do it in the first place.

That’s the thing about entertainment however, it’s so subjective that at times a lot of people can’t figure out what’s going on but a lot more just jump on the bandwagon because they don’t want to be left behind and be left out of anything. The solidarity is great since it makes people believe that they’re doing something and watching something worthwhile, but the idea that they’re doing it just because the person next to them is doing it, without question and without a chance to voice their own opinion, is kind of sad.

Tom Hanks is a great actor and can take a lot of credit for bringing David S. Pumpkin to life, but the idea that the character has become this popular is a little bit disturbing merely for the fact that he’s that simple and doesn’t seem to do much but say his name and a few lines before smacking his skeleton assistants on the rump. That’s a strange type of comedy that some people get but for reasons that the rest of us don’t understand. The absurdity of the character is obviously the funny part, but why he would inspire so many to buy out the costume is kind of hard to fathom.

Oh well, to each their own.