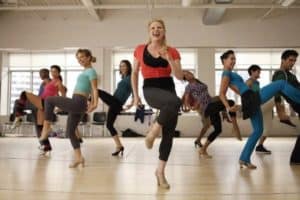 This week’s Smash veered between what works and what doesn’t always work on the show. Let’s begin with what works: everything in the rehearsal space, including the rivalry between Karen and Ivy. Last week Derek may have dismissed Karen, but this week she seemed to be his new best friend. Ivy arrived at rehearsal to find Derek and Karen dancing one of the numbers together, which immediately gets her hackles up. But it got worse when Ivy was performing “Let’s Be Bad” in the workshop, only to have Derek stop her and ask Karen to show her how it’s done.

Ouch. As Karen sung “Happy Birthday” in a Marilyn voice, Karen is both horrified and embarrassed that she’s been compared to one of the ensemble girls. This only got worse when Derek asked Karen to work with Ivy on this particular number. Ivy did show up for that little tutoring session and while Karen seemed embarrassed to be schooling Ivy, Ivy was more than happy to put Karen in her place.

Later, Smash delivered up the first full performance of a song which included not only the costumes, dancing and singing on the Broadway stage, but also surrounding conversation and acting. Ivy as Marilyn walked onto a movie studio set while drugged. Arthur Miller (her husband at the time) was complaining about her pill popping, but she soldiered on, despite the fact that she’s noticeably out of step. Megan Hilty is a gem as Marilyn and I honestly have to wonder whether Karen could pull off the Marilyn role as well as Ivy does. At this point I’m thinking she can’t, at least not based on what we’ve seen. That’s not to say Karen isn’t talented, because she very clearly is. It’s just that she doesn’t seem to embody Marilyn like Ivy does.

Ivy wasn’t really acting like a diva in this episode, she’s just clearly afraid of losing her big break. She understands Marilyn to a very strong degree, but clearly doesn’t want to become exactly like her. So after getting drunk at a bar with some friends she headed over to Derek to confront him. He basically told her that the workshop is business, not personal, but did invite her to spend the night. Despite Derek’s outreach, I can’t help but wonder whether this relationship will crash and burn before too long.

Here’s what didn’t necessarily work about Smash: the Julia storyline. I love seeing Julia interact with Tom and Eileen, but this affair with Michael is ill advised. The two were out for dinner when Julia’s son Leo was arrested in Central Park. Unable to reach his mother, he managed to get through to Tom, who took his new lawyer boyfriend to the police station to get the boy out. But Julia was furious about her son’s actions. Later, Michael stopped by the house and while Julia’s husband is away, he seemed to step nicely into the familial unit. Later, as Julia was waiting outside for Michael’s cab to arrive, he decided to sing her a little song and the two of them kissed. Unfortunately, Leo was watching from the window. 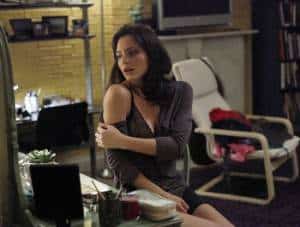 Michael bothers me. He’s got a wife and a young child at home and he just seems to actively pursue Julia. Don’t get me wrong, Julia is certainly not innocent in this situation. In fact, she’s just as guilty. But she at least pretends to resist for a while while Michael just keeps pushing. There is no good way for this story to end, other than Frank finding out, beating up Michael and him getting kicked out of the show. This is a disaster waiting for happen, but I’m just angry about the choices these people are making instead of getting swept up in the drama.

The other B-storyline for this week’s Smash concerned Dev, who I generally like as a character, but doesn’t really fit into the overall story arc. Karen seemed a bit jealous to see a pretty female reporter that Dev has been hanging around lately and then later tarted herself up at his request for an important political dinner. I know it will likely never happen, but Dev should get a job as Eileen’s publicist so he can have something to do with the musical besides just being “Karen’s boyfriend”.

Like I said, a lot about this episode of Smash really worked. The show is really just finding its footing, but if you keep giving me amazing Ivy performances, I’m certainly not going to be changing the channel. You can watch the terrific performance of “Let’s Be Bad” below.