Home
Television
Sleepy Hollow
Sleepy Hollow S3 Finale Review: The End is near as Team Witness tries to save the world. 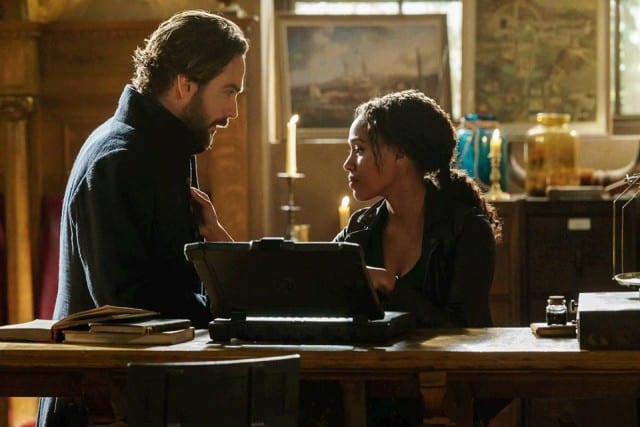 Before I begin this review of the third season finale of Sleepy Hollow, I would like to say one thing: The scene where Pandora double-crossed the Witnesses (my sinking feeling was right) after Abbie sacrificed her soul, I half expected her to quote Slade from the Teen Titans cartoon series. Those of you not familiar with the quote, it is this: “It’s the end of the world, did you think that it would be easy? I don’t expect you to win. I don’t even expect you to live. Only endure.” It’s a powerful quote and very fitting, do you not agree?

Quote aside, there are a few things about this finale that doesn’t sit well with me. First, I had thought that Betsy Ross would aid the Witnesses in their fight to save the world from the Hidden One and not go back to 1776 through the well outside the Catacombs after her brief conversation with Ichabod and Abbie. The second thing is when Jenny and Abbie distracted the Hidden One with Greek fire while Ichabod returned Pandora’s Box to her. How did they know where the Hidden One is located and how was Pandora able to get out of her mirror prison when just moments before she begged her husband to release her? I get that this is supposed to be a dramatic and suspenseful finale like all the other finales but I had a hard time wrapping my mind around it.

On a side note, when the Headless Horseman was being summoned by Ichabod, who said the name Samael, it made me laugh a little because Samael is one of the names that Lucifer goes by before he got cast out of Heaven and was condemned to rule Hell for all eternity. I thought to myself since when did Lucifer have the time to go from Los Angeles to Sleepy Hollow?

Overall, I did enjoy some parts of the finale, like the scene with Abbie and Sheriff Corbin. It was a heartwarming way to lead to Abbie’s departure, which in turn, leads to Nicole Beharies’ departure from the show. I also liked the various scenes towards the end of the finale with Ichabod and Abbie as a way to tell the man out of time to move forward and to remember their bond. I rolled my eyes at Ichabods’ deep bow but it was a grand gesture from him nonetheless.

The finale scene at the graveyard intrigued me. It turns out that Washington has founded an organization to fight against the supernatural and that Ichabod must locate the person that has Abbie’s soul within her as she is to be the next Witness. I find the idea of having an Eternal Soul intriguing as it has direct ties to the concept of reincarnation. Makes me wonder who will be Abbie’s reincarnation, that is, if the show is brought back for a fourth season.

It’s the end of the world. Can the Witnesses save it from the Hidden One in this third season finale of Sleepy Hollow?