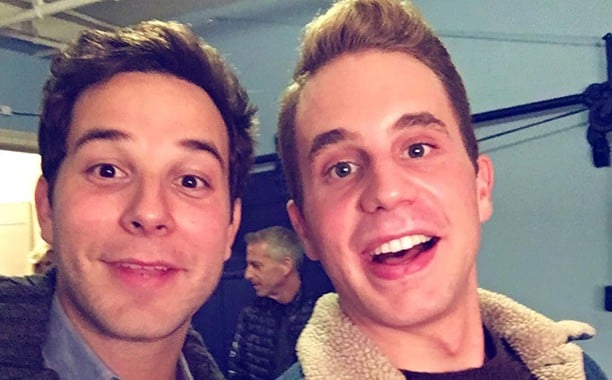 Skylar Astin is one of many individuals that seems as though he was always going to gravitate towards a career in show business for one reason or another and obviously that’s what happened. Throughout his career thus far he’s taken on small roles here and there and bigger roles once he really got going. If you don’t recognize him then a quick search would help out and you might face palm yourself for not realizing just where you’ve heard his name or seen his face. It happens, especially since in this day and age there are just so many names and faces to keep up with that trying to remember them all at the drop of a hat is almost impossible. But Skylar is most definitely a talent that’s been coming up in recent years and someone that’s been doing his best to increase his reputation as he’s continued to show up on the screen, big or small, and wow the audience with his talents.

Here are a few things you might not have known about Skylar.

10. He worked in a deli before he became famous.

Everyone had to start out somewhere remember, and not every last actor has been able to work their way to the stage when they wanted to without any struggle. A lot of folks that are famous now have had pretty normal jobs in the past and could probably tell some very interesting stories.

9. Astin is his middle name, so no, he’s not related to Sean Astin.

His agent actually changed it when he was 15, for the purpose of becoming known since his real last name of Lipstein didn’t seem like it would be the best way to be introduced. It might have been a gamble to use his real last name but his agent wanted to give him an edge.

8. Skylar first got into acting when he was 14.

It sounds as though his mother mentioned a part that she wanted him to audition for and it didn’t take much prodding until he went and tried to get the part. From that point acting just seemed to be what he wanted to do and he went with it.

7. He doesn’t pay a lot of attention to the reviews of his work.

He’s said it’s kind of hard to avoid Twitter and Facebook reviews since they come right to his phone but he never seems to read the reviews of his work and he’s all the happier for it since to be honest critics aren’t always the nicest folk or even the most helpful if they decide to butter someone up for the talent they supposedly have. In essence, critics are avoided by those that want to make up their own minds about their lives and what they happen to like.

6. When it comes to acting he’s usually up for doing anything challenging.

This is what a lot of people in show business seem to like to hear since it indicates that a person isn’t going to be too supremely picky when it comes to accepting a role. It does seem as though there are parts that he wouldn’t want to take but he does seem very open to a lot of ideas that come along.

5. He and his wife just filed for a divorce recently.

Jess Cohen of E! News is just one among the many that have announced how Skylar and his wife Anna have recently broken off their marriage. The two had been dating since 2013 and had been married for just two years it sounds like before finally deciding to end it. Sometimes it seems that that couples aren’t ready to take that next step even if they think they are. It’s a sad thing to realize but best for both if they admit it and move on as friends.

4. It’s not much of a surprise he has a huge presence on social media.

He does have over a million followers on social media and is well-liked by many of those that keep tabs on him. It’s fair to say that he interacts with a lot of people and keeps up on his posts pretty regularly.

3. He had a part in the Disney film Wreck It Ralph.

It was a small part but he was there as the character of Roy. If you looked closely you’d see that the movie was full of voice talents that had very minute parts but were still an integral part of the whole thing.

This seems kind of low for what he’s done but it could be on the rise for all we know since a person’s net worth does tend to change from time to time.

1. Skylar’s real breakthrough came when he starred in Pitch Perfect.

If ever there was a movie for a breakout role this was one of them since it helped a few people to really get noticed a bit more.

Right now it would seem that his popularity might be hitting an upswing.