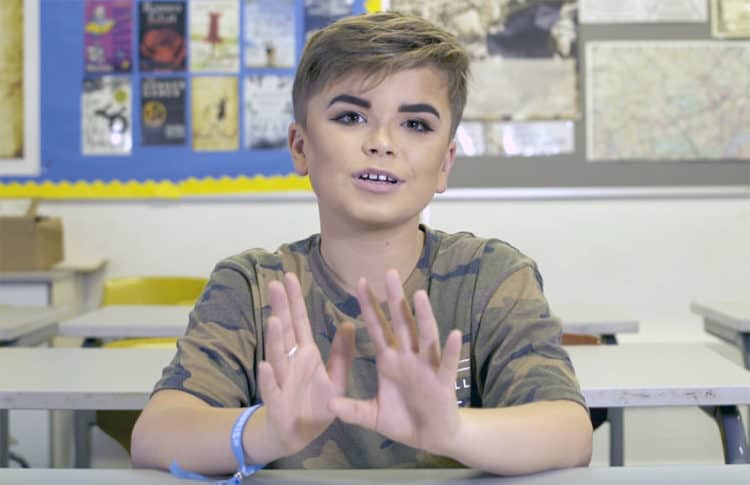 Being a teenager isn’t easy, and that becomes even more true for people who don’t fit into the stereotypical box of what is considered ‘normal’. This is something Reuben de Maid has been dealing with since long before his teenager years. The 15-year-old has experienced bullying for most of his life because of his love for wearing makeup. But despite the cruelty he’s faced, he’s managed to find lots of opportunities for positivity. Reuben first found himself in the spotlight when he was invited to perform as a singer on Ellen a few years ago. Since then, Reuben has become a social media sensation and he recently earned his own realty show on CW Seed. Continue reading for 10 things you didn’t know about Reuben de Maid.

1. He Started Wearing Makeup At 8-Years-Old

Reuben is only 15, but he’s already been doing makeup for more than half of his life. He said, “Ever since I was eight, I used to be so interested..I [would] watch my phone for hours on end just learning from tutorials, like blogs, and seeing how to do it.” Although he knew that his interest in makeup was different than the interests of other boys his age, he didn’t let that stop his creativity.

Reuben was born and raised in Wales and is very proud of his Welsh heritage. However, over the last few years, he has become an international celebrity. Thanks to his singing abilities and makeup skills, Reuben has gotten the change to visit different parts of the world and interact with all kids of people.

3. His Parents Are Very Supportive

Some parents would be very judgemental if they had a son who was interested in makeup. There have even been horror stories about parents who have disowned their children for not following traditional gender norms. Fortunately, Reuben’s parents have never been that type. They are very supportive of their son and are proud of his talents.

4. He’s Hung Out With Kim Kardashian

When it comes to being a social media influencer, Kim Kardashian is an OG. For more than a decade, Kim has had an incredibly large following on social media. Needless to say, Reuben is a fan. He even got the chance to meet Kim K when she surprised him while he was recording a makeup tutorial using products from her line.

5. He Hopes To Inspire Others

Although things haven’t always been easy for Reuben in terms of being accepted by his peers, he has managed to persevere. He hopes that his story will inspire others to have the confidence to be themselves regardless of what other people have to say about it.

6. Doing Makeup Is Relaxing To Him

Makeup has become one of Reuben’s favorite ways to express himself, but it’s more than that. He actually finds the process of putting on his makeup to be very “therapeutic”. He told the Huffington Post, “When I’m putting my makeup on, I zone out, I watch some Netflix. I take my time – usually I give myself two hours, because I know I’ll get distracted by the screen.”

7. His Mom Prepared Him For Dealing With Internet Trolls

Social media influencers have a lot of people who love them, but there are just as many people who don’t. When he first started to wear makeup, his mom helped prepare him to deal with all of the bullies and trolls. He has since developed a very thick skin and doesn’t let haters get him down.

8. He Went To Drama School

Reuben developed an interest in entertaining at an early age and decided to enroll in drama school as a result. He was excited about joining the program, but it didn’t take long for the bullying to begin. Not only did he have to deal with people saying mean things to him, but he was even kicked and punched by some of his school mates.

9. He Doesn’t Plan On Starting His Own Makeup Brand

Once makeup influencers reach a certain level of popularity, the next step is usually to create their own makeup line. But Reuben is considering following a different path. He understands that there are lots of challenges associated with launching a makeup line because the market is already so saturated.

Reuben is truly living his best life. He has his own reality show, he has a huge following on social media, he’s gotten to meet celebrities, and he’s been able to travel. Some of the places Reuben has visited include Dubai, the United States, Spain, and South Africa.