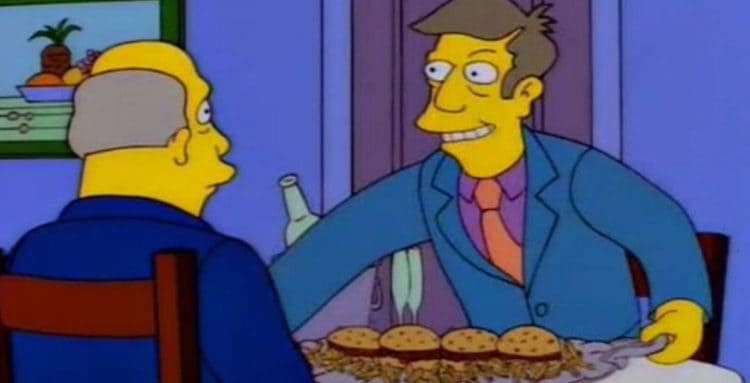 The Simpsons fan theory that can explain the steamed hams has kind of a roundabout way of getting to its own point and yes, it does bring the Aurora Borealis into it as well. But if you’re ready to sigh and roll your eyes then get it out of the way because it’s kind of a natural reaction to something that fans might have blown way out of proportion, as fans are wont to do at times. But to someone this was important enough to bring up since it became something that went online and has actually drawn enough interest that people have continued to look at it and explain for a while now. The episode in which this happened is roughly 20 years old and yet people are still talking and writing about it at this point as though to keep it interesting and make it worth while when talking about it.

Hey, whatever people like, that’s their business. But here’s the theory.

The theory is that Seymour gave Chalmers wrong directions.

That seems pretty thin for a theory but it’s also able to explain why Seymour’s roast was burning. He was cooking it and leaving it in the oven so as to keep it ready for Chalmers when he arrived. Unfortunately since his directions were obviously horrible he absentmindedly forgot about the roast and that was what caused it to burn. As a theory that’s pretty simple but the need to talk about it is kind of complex since people tend to see a need for further explanation on many things that don’t seem to warrant much more than a simple blurb that will be forgotten by lunch time since it wasn’t the main point of the whole episode. But hey, people do tend to notice strange things now and then, hence the reason that Easter eggs are so popular and the reason why fanboys and girls are not among the favorite individuals of those that want to enjoy something without having to analyze it time and time again.

The deception of Krusty Burgers.

The ‘steamed hams’ scene is pretty fun since the burgers are grilled and likely taste like the fattening, artery-clogging things that are pumped out of Krusty Burger on an assembly line. But Seymour is either that convincing after having said steamed clams and then moving on to steamed hams as his explanation, or Chalmers is that gullible, that it actually works. In real life you know what would happen, but in The Simpsons real life is kind of suspended and for good reason. Most of the stuff that would have to be taken literally would be kind of boring if left in such a state in this show. Steamed hams sounds like one of the most ridiculous things to ever call a hamburger with grill marks but to be honest it creates a funny scene so it’s acceptable within the boundaries of the cartoon.

The Aurora Borealis….in his kitchen.

Again, this is banking a lot on the fact that the characters in the show have moments when they’re just not that bright. If you open your kitchen door to a hellish nightmare of flame and smoke you don’t normally think Northern Lights, but apparently Seymour had that excuse ready and waiting in his pocket to spring on Chalmers if he ever needed it because it came out smooth and without any effort. You can almost hear the fictional gears in Chalmers’ head spinning as he tries to sort out the probability, along with the possibility, of the Aurora Borealis being centered in a single kitchen at that time of year and in that small of a location. And then he asks if he can see it, to which Seymour says no and then sees him to the door. This is something that was quite amusing when it first aired and is kind of funny now, but the idea of creating a theory about seems kind of odd since there wasn’t a whole lot to go on that wasn’t part of the ongoing gag. But as soon as Seymour said it a lot of fans probably thought about what it would be like to see the Northern Lights in a single room in their home, as that’s usually how the power of suggestion works even on a cartoonish level.

The Simpsons tend to get away with a lot on their show largely because it is a cartoon and thus it can stretch the boundaries of what’s easy to believe and what might make people turn it off because it’s just TOO unreal. Obviously this scene with Seymour and Chalmers skates perilously close to that area but it manages to rein it back in just enough since it happens to work as a gag and therefore can be more funny than anything.