As I’ve said in many of my Silicon Valley reviews before, while this show is most certainly an underdog story, it’s also about the journey of Richard Hendrix as a CEO. What type of leader will Richard be, and how will he be similar or different to Gavin Belson? That’s been the main question that Silicon Valley has been posing since it first began, and while it has showed us different sides to Richard before, it finally displayed his true colors in last night’s episode, which was, yet again, another season best installment for the series.

Throughout Season 2, Silicon Valley has continuously upped the stakes for Richard and Pied Piper, to the point that, in nearly every episode, the guys are questioning whether it’s really the end for them as a company or not.  However, between last week’s Intersite debacle and last night’s arbitration hearing, it appears that Pied Piper will truly be no more, or at least no longer retain the autonomy it once had.

And it all comes back to Richard and the type of leader he wants to be. As he says in his speech in “Binding Arbitration,” the one he delivers before admitting the truth that he had used a Hooli computer once (and only once) while working on Pied Piper, he talks about how he wanted to be different than the Gavin Belsons of the world. He’s seen everyone in this town be liars or crooks, and he wants to be better for Pied Piper, even if his honesty and morality end up costing him the whole company. Because for Richard, this was never about the money or the prestige: Pied Piper was all about changing the game, about building something different and remaining true to who he really is.

So it’s Richard’s commitment to his own dream (along with Erlich’s bruised ego) that allows for Hooli to win the arbitration case against Pied Piper, the ultimate price that Richard must pay to remain true to his convictions. But maybe that’s the real story Silicon Valley was telling all along, underneath the satire and the crude language and jokes about male genitalia. As much as the show is about the little guy going up against the big bully, it’s also about the little guy remaining true to himself and not giving up who he really is in order to get more money or power.

Up until this point, Silicon Valley has been illustrating Richard’s internal struggle for us, but with that now seemingly over, the series truly finds itself in uncharted territory as we head into next week’s season finale.  I honestly have no idea what will happen next (except that it’ll probably involve that worker from the zoo, who falls and nearly dies at the end of “Binding Arbitration” as he attempts to disable the camera providing Pied Piper’s live-stream). And it’s that uncertainty that has proven to be Silicon Valley‘s greatest asset this season; whether the show is making me laugh or gasp, it’s constantly surprising me.

– I knew this episode was going to be amazing as soon as Richard and Gavin started talking to each other on the phone. The two of them, going back and forth with what they could and could not say, according to their lawyers, was hilarious.

– Everything involving Dinesh, Gilfoyle, Jared, and Schrodinger’s Cat was terrific. Anytime you put those three together something incredibly funny happens.

– Erlich on the stand was also priceless. After having Erlich perhaps be a little too arrogant last season, Silicon Valley has done a nice job throughout Season 2 of putting him in uncomfortable situations where he is constantly getting knocked down a peg or two. Yet he still remains his cocky, delusional self, and I wouldn’t have it any other way.

– Big Head may not have any skills, but he does have a boat. Only three more classes till he gets his license.

What did everyone else think of this week’s episode of Silicon Valley? And where do you think the series will go in next week’s Season 2 finale? 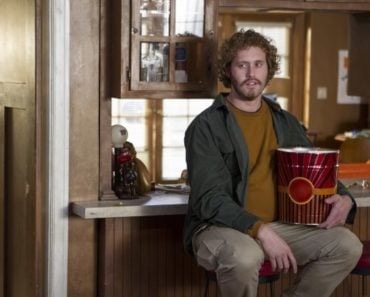