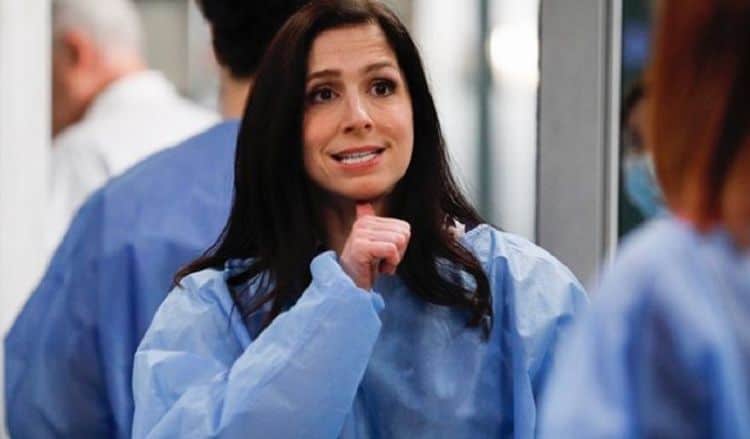 The hit show, Grey’s Anatomy, has officially made history during its 16th season. In a recent episode, the show introduced Dr. Lauren Riley, a Deaf physician played by Shoshannah Stern. Dr. Riley’s appearance on Grey’s represents the first time a Deaf doctor has appeared in a primetime TV show. While this new character is definitely interesting, the woman behind the role is equally as impressive. Shoshanna Stern, who is Deaf in real life, is a seasoned actress who has been sharing her talents for almost two decades. Before Grey’s, Shoshanna was a regular on shows like Weeds and Jericho.  As her character’s story on Grey’s continues to unfold, there’s no doubt that fans will want to know more about Shoshannah’s story as well. Keep reading to learn 10 things you didn’t know about Shoshannah Stern.

1. Her Grandmother Was A Holocaust Survivor

Shoshannah Stern was born into a very traditional Jewish family in California. Although there isn’t much information floating around about her family life, one thing that we do know is that one of her grandmothers was a Holocaust survivor. Sadly, more than half of Europe’s Jewish population did not survive the Holocaust.

Shoshannah studied English as a student at Gallaudet University in Washington D.C. The school is well-known for being the only liberal arts college for the Deaf in the entire world. Students at the school are given instruction in both American Sign Language (ASL ) and written English. Shoshanna’s sister, Louise, also attended the school.

Shoshannah Stern may have spent the last the last two decades working on her craft, but that doesn’t mean she didn’t make time for her family as well. She married her longtime boyfriend, Ricky Mitchell, in the summer of 2012. The couple welcomed their first child, Mayim Helene in 2015.

4. ASL Is Her First Language

American Sign Language (ASL) is the first language Shoshannah learned. Over the years, she has also learned other ways to communicate. Shoshannah can read lips and speak English without an interpreter, something her character on Grey’s Anatomy does as well.

5. Everyone In Her Immediate Family Is Deaf

Although there are various reasons why a person could be born Deaf, genetics can also be the cause. Shoshannah Stern was born into a 4th generation Deaf family which means everyone in her immediate family is also Deaf. According to Shoshannah, she “grew up always having 100 percent accessibility to language and communication, which was wonderful and something so many deaf people don’t have.”

Many of you may remember Shoshannah from her role as Bonnie Richmond in the series, Jericho. When Shoshannah initially auditioned for the show, she went out for the role of Emily. This role was ultimately given to Ashley Scott, but the team liked Shoshannah’s audition so much that they went back and wrote the character Bonnie for her.

The list of cool things Shoshannah Stern has done just keeps growing. In 2008, she was in the music video for will.i.am’s promotional single “Yes We Can”. The song was used as part of Barack Obama’s presidential campaign and contained lyrics that were entirely comprised from his speeches. Other people in the video included Common, John Legend, Scarlett Johansson, and Tracee Ellis Ross.

8. DayQuil Inspired Her To Pitch The Idea Of A Deaf Doctor On Grey’s Anatomy

If you’ve been wondering the back story on how Shoshannah Stern landed a role on Grey’s, you’re in for a real treat. Not only did she pitch the idea of a Deaf doctor all by herself, but she did it while hopped on a cold medicine. Apparently, Shoshannah was feeling a little under the weather before sitting down to do a panel with Grey’s Anatomy showrunner, Krista Vernoff. She decided to take some DayQuil to help her symptoms, and the rest is history.  Here’s the backstory according to Shoshannah, “Then the next morning I woke up and realized in my DayQuil-induced haze I had pitched the idea of a deaf doctor on Grey’s to her. I used to have dreams that I was a doctor on the show, so it wasn’t out of left field, but it was also definitely something I would not have the guts to do if I wasn’t juiced on cold medication.”

9. She Believes Her Role On Grey’s Could Save Lives

Shoshannah Stern understands the importance of Deaf representation in the entertainment industry. She hopes that her role as Dr. Riley will help educate people on the Deaf community, but she also thinks the role has the potential to save lives by helping highlight the struggles many Deaf people face in the medical/healthcare space.

Shoshannah Stern is all about giving back to the community and helping those around her. In addition to her work with the Deaf community, she has also worked on other projects including the “All You Need is Love” campaign which helped provide resources to a non-profit organization called Off-The-Grid Missions.