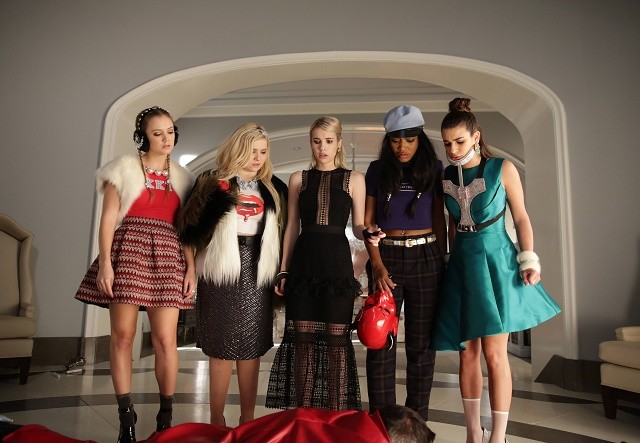 Scream Queens has been a really nice surprise this fall, and I’ve really enjoyed the show’s overall blend of horror with comedy. Each week made me laugh at least once, mainly thanks to Chad Radwell, but I also loved the satirical look at college and the Greek societies as a setting. Scream Queens hasn’t been an overly consistent show that has blown me away week to week, but it has done a good enough job to keep me interested, laughing, and curious to discover who the murderers are.

The first episode in the two-hour finale, “Dorkus,” did a nice job of closing up relationships in an honest way. Despite his radical moral beliefs caused by being led on and embarrassed the Chanels, Pete really did care about Grace. I was never a fan of his character, but I did appreciate that his feelings for Grace were true and he died with his chivalry still intact. I also liked the conversation between Grace and Wes after Pete dies. It shows how much Wes has been able to mature and become a real father, because aside from his hatred for the Greek society, Pete’s feelings were honest, which Wes saw. Aside from this, “Dorkus” didn’t feel like it had much substance, because at this point, we’re all just waiting to discover who the killer is. I enjoyed that the episode tied up some of its relationships like I just mentioned, but otherwise, it only provided some good one-line jokes.

“The Final Girl(s)” opens up a little bit in the future; Zayday is president of Kappa with Grace as her VP, and Hester (sporting a glitzy eye patch after being stabbed with a stiletto) is still alive. Wallace is now supposedly safe college campus. When “Dorkus” finished up, it was implied that Chanel #5 was the final Red Devil Killer, which, I’ll admit, seemed pretty likely. I really thought it was going to be Chanel #5 for a couple of reasons: she was the only main Chanel whose background and family were unexplored, she always seemed be ignored and seeking attention, and her backseat killer experience from “Ghost Stories” was something that could be easily faked.

I really loved the twist that it was Hester, and that the final episode was going to reveal her entire plan from the start. However, TThe Final Girl(s)” started out really great, but quickly became a little overly preachy about fitting in the messages it wanted to tell its viewers. Hester played up the whole un-accepting nature of most modern people; she knew that if you look weird or have a physical deformity, people will automatically judge you and not care at all about you or your background. This was how she got into the school because Dean Munsch knew her records were falsified but the school didn’t have any students with a spinal deformity, allowing her to unassumingly go on as the killer among her sorority sisters. Hester kept Zayday and Grace alive because they’ve always been nice to her, like most typical school murder plots. I didn’t mind this, because Zayday was the only completely pure character and even Grace’s temporary murderous intentions were her going to extreme lengths to create a true Kappa sisterhood.

However, I thought it was extremely disappointing that Grace and Zayday basically have all the evidence they need to pin things on Hester (DNA results from Pete, etc.), but they buy into her big tall-tale story. I know that this is playing on the show’s satirical ideas that college kids and Greek society members are stupid, but they went a little far with the joke. Scream Queens creates a setting that plays up a lot of things wrong with society, but for as fun as those ideas were for awhile, it became a little too preachy with the statements it wanted to make. The show really killed a bunch of its own jokes by overusing them, too; I was extremely tired of Pete’s Matthew McConaughey impersonation as well as Denise Hemphill’s constant accusation of Zayday.

In the end, it’s up to the viewer to decide what’s better: that Hester got away with everything, or that Kappa was rid of its cruel hierarchy of Chanels and made a friendly welcoming place that is focused on true sisterhood. Can good come out of evil? For me, I feel like it really cheapened Zayday and Grace’s characters because they were the smart ones who stood for justice and seemed like they would solve everything. However, I guess this could, again, be a way for the show to express how people will willingly overlook something if they get what they want. Zayday becomes president, Grace is her VP and a part of the Kappa sisterhood she always wanted; hell, even Dean Munsch directly calls Hester out but won’t sacrifice her fame and power for justice when Hester threatens to expose the Dean’s wrongdoings. I liked Grace and Zayday because they didn’t want to rid Kappa of its current members, but remind them of what it meant to be a part of a sisterhood, and while Kappa will be better off with them in charge, I can’t help but feel a little disappointed at their sudden lack of brains in their quest for the truth.

The two-hour finale of Scream Queens dragged on a bunch, and the length of the finale could have easily been condensed into 90 minutes. I didn’t need the long ending of the Chanels in court or the insane asylum. It was funny that they loved being in an asylum and turned it into a sorority, but again, a little preachy in its comparison of sororities being filled with insane girls. I guess people never change, but at this point, I was losing interest and needed things to end.

Overall, I really enjoyed Scream Queens a lot and think it did a pretty good job of offering a satirical take on the generalizations that people make about college kids and Greek societies. While I personally know that all fraternities and sororities aren’t like this, enough comes out in the news to see that the stereotypical versions of these organizations still exist, and I think that’s why the show worked so well. I’ll be excited to see which actors return if there’s a next installment of the show (the ratings have not been good at all), along with its setting and plot, because I would love to see Glen Powell in another role that is as funny as Chad Radwell.