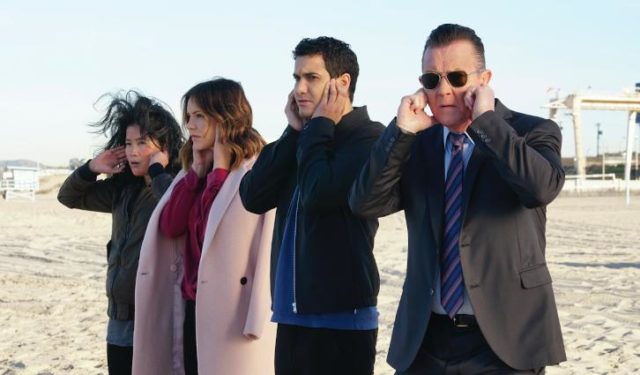 We’ve seen Team Scorpion create a tsunami, but now, they’re going to stop one. In this week’s episode of Scorpion, the team heads to Mexico to repair cracks in the power plant. Toby fakes a back injury to help Amy with getting her identity back while Sylvester is at a book signing.

I understand Toby helping his ex-fiancee out, but he doesn’t need to hide it from Happy. Isn’t it a rule to never keep secrets from your spouses? I mean, he could have told Happy the truth, but instead, he opts to keep his mouth shut. No wonder the mechanical prodigy thought the worst when she found out that her husband is in Koreatown with Amy. At least Quintis managed to work things out, and fingers crossed that there won’t be any secrets between them anymore.

With regards to this week’s mission, aside from the suicidal attempt by Happy to open the valve thing in the pipe to let the steam out, feels a bit anticlimactic. The tsunami that was going to hit the power plant went from a hundred-foot wave to a tiny one after the steam bubble rendered it powerless. I half-expected to be a massive wave but not as destructive as it was before. Like it could still do damage to the power plant but not so much damage that it topples it and claims ten thousand lives.

Circling back to Toby, I applaud him for putting his psychology training to good use. He got Rhonda to help after pointing out that someone in her underground casino is cheating. Shame it didn’t work when he and Amy went to see The Gooch. The latter refused to do Toby a favor and instead stuffed the behaviorist and Amy into an empty casket. If it weren’t for Agent Gallo coming to the rescue (I’m guessing that Happy tracked her husband’s location using the keychain), I’m sure that Toby and Amy would be six feet under.

In the end, Team Scorpion saved the day as usual, and Quintis have let bygones be bygones. They then played a relationship game with Waige to see who will end up buying dinner at Kovelsky’s. When Toby asked the first kiss question, I can’t help but feel like he’s doing it on purpose to throw Waige off-track. However, I do give Waige credit for apologizing to each other after their lover’s spat during the episode.

I feel sorry for Amy. She had a failed engagement when she was with Toby, and now her marriage to Quincy is over. Top that with getting her identity stolen is just adding insult to injury. Hopefully, she will get back on her feet soon.

Yay for Sylvester finally getting his book signed and meeting the author of his favorite book. I snickered when Agent Gallo offered to look the other way with the IRS as long as the author signed his copy of the book as well. Well played, Agent Gallo, well played.

Team Scorpion must prevent an incoming tsunami from hitting a nuclear power plant in Mexico. Toby secretly helps his ex-fiancee Amy with retrieving her stolen identity in this week’s episode of Scorpion.