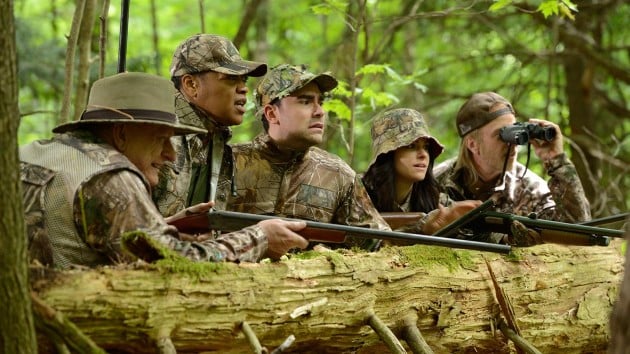 Schitt’s Creek has really come together the last few episodes, the lightest touch of self-realization with its characters adding new depth at every turn, enhancing the already-funny scripts into much more rewarding television. “Turkey Shoot,” while it doesn’t carry the same existential weight of recent episodes in the first two acts, cleverly side steps in the third act, presenting a very interesting idea to Moira, after she gets her hair Jocelyn’ed by Janine at the local salon: the Rose family might be stuck in Schitt’s Creek for awhile, and it’s time they started letting the people around them help them heal.

Initially, Schitt’s presented itself as a comedy about culture shock: and with characters like Dan and Moira, the series has certainly retained some of that through its first season. In “Turkey Shoot,” that manifests as Dan going hunting for the first time after Stevie chides him for being afraid of killing an insect, leading to horrific results (“You shot it in the neck… so it’s going to die slowly”). Those stories, however, have been tinged with something deeper, and a little darker, in recent episodes: Daniel’s anxiety, Moira’s past failures, and Alexis’ loneliness have all become much more prevalent since the events of “The Cabin” – and they enhance stories like Moira’s, which initially presents itself as a fun excuse to give Moira a Jocelyn wig, then proves to be hilarious, and then reaches for something a little more.

That little something comes in the form of Jocelyn’s speech to Moira about learning to settle down and let the people around the town help her: for all their idiotic behavior, the people of Schitt’s Creek have proved to be nothing but good people, something David and Alexis are beginning to notice, thanks to their blossoming friendships with Stevie, Mutt, and Twila (whose Meadow Harvest shakes are not recommended by regular customers – the vet Alexis dates gives them to his patients for digestion problems). Everyone here really wants to help them: maybe the Rose family is wrong to view the Creek as some kind of silent, ancient purgatory – and instead, view it as a place to heal as human beings, and as a family.

In the context of the episode, it may feel a little tacked onto the end, and it doesn’t really speak loudly to Alexis or David, whose interactions with the locals of the town don’t really lead to anything enlightening, though the parallels of self-discovery were neatly introduced. Instead, “Turkey Shoot” just kind of drops off, ending on a high note when David’s scarred memory is healed by the sight of Jocelyn’s hairdo on Moira’s befuddled head, making a neat circle back to the beginning of the episode when he goes to grab his towel for her to use, laughing at the horror that’s on her head the whole way.

No, “Turkey Shoot” isn’t exactly a deep exploration of the themes it presents – but when those themes don’t come to light until the final act, it doesn’t give a lot of time for the characters to expound on its ideas. Working backward, some of the framework can be seen: the idea of a community as a healing power, forcing people into uncomfortable, unfamiliar situations in order to resolve deep-seeded issues (the appropriately-named Community is a fantastic example of this). Without a sense of resolution, the lessons and gains of “Shoot” can only be measured in future episodes of the show – but it certainly feels like a turning point of sorts for many relationships on the show, a cleverly-disguised set up episode for whatever absurd hilarity is bound to follow.