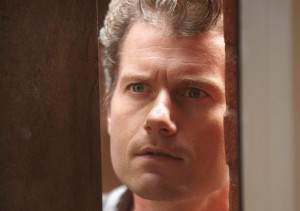 What makes Rubicon brilliant is the pacing. We started out this season with minimal answers, minimal development, minimal everything. We had a lot of Will Travers struggling to find out just what the hell it was that he was supposed to find out. And then he found out, and everything started moving at such a breakneck pace. The attempt on Will’s life last week brought the episode up to a whole new level of action. How could Rubicon have outdone itself after “A Good Day’s Work?”

It did. “Wayward Sons” was the best episode of the series. Period. It might even qualify for one of the best episodes of television this year. The episode had us all so focused on the characters that when the final, shocking climax occurred, it completely knocked us down and pinned us. Rubicon‘s scale, in one single moment, went from intimate to epic the minute Maggie walked in the conference room and told Will to turn on the TV. The devastation was instant. We ended the episode with Will crumpling up in his apartment like a sick puppy. He failed. He realized the truth at the instant he was helpless. That scene, right there, was the payoff of the entire series. The falling action will happen next week, but something tells me there might be a little rise in it as well.

What else great happened in this episode? Truxton Spangler. Michael Christofer was once again off the hook as the API Head, and his interaction with everyone was just absolutely fantastic. He and Arliss Howard are the powerhouse actors of the show, and their scene together in this episode was so well-acted that I was gripping the edges of my seat with such intensity that the upholstery started to rip. Does Truxton now want to kill Kale? Undoubtably. I just hope and pray he isn’t successful. Kale is the single greatest character on cable television (though I’ll be more than happy if either Howard or Christofer even get an Emmy nod).

Kateb was given equally great scenes, for the most part. His quiet final ritual (last cartoon, last meal, last wank, last song) was so haunting that those scenes’ placement in the otherwise chatty episode was just as shocking as Kateb’s final act of creating an oil spill that make Deepwater Horizon look like a nosebleed.

And that’s when Rubicon became one of the scariest shows on television. The realistic terrorist attack that Kateb perpetrated was more shocking than any bombing or hijacking could have been. Some might call it sensationalism to use such a story device (“too soon” criticisms are usually reserved for South Park), but I think that just made it more effective. Rubicon plays to our real fears, and makes us wonder if there was somebody, like Truxton Spangler, who sat in his office smiling after the gulf oil spill occurred. It’s truly chilling.

And that’s where I’ll leave you guys. This episode was so wonderful that I couldn’t give it anything but an A+. Though I’ve already written an open letter to AMC about it, I have to insist that the network renews Rubicon for a second season. I hesitate to say this so soon, but it might have just become the best show on television. If not, it’s pretty damn close.