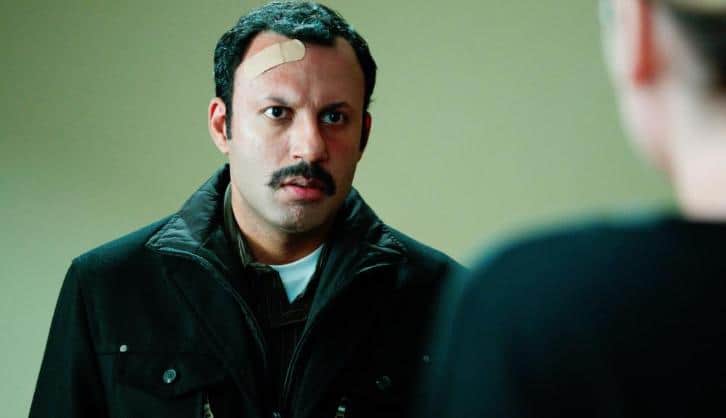 Rizwan Manji is a Canadian actor who is best known for his role as Rajiv in the television series “Outsourced.” He is a seasoned veteran actor who has had a variety of interesting roles throughout his career. As we looked through his history we discovered some interesting things about him to share with fans. Here are 10 things you probably didn’t know about Rizwan Manji.

1. He was born in Toronto, Canada

Rizwan Manji didn’t take a stage name. He acts under the name that his parents gave him. He was born on October 17, 1974, and he is 45 years old. He has a sister named Rishma, who was raised with him. His mother and father are immigrants from Tanzania and are of Ismaili Muslin of Gujarati India descent. His family moved to Calgary, Alberta when Rizwan was in the first grade and he grew up in this city.

2. His career choice was different than what his parents wanted for him

Rizwan attended the Crescent Heights High School in Calgary. After he graduated from High School, his mother and father wanted him to earn a college degree. He had a passion for acting and that was the career that he wanted to pursue, but he enrolled at the University of Alberta where his sister was attending college. He didn’t enjoy any of the courses he was enrolled in except for the drama class.

3. He followed his heart to pursue acting

Manji knew what he wanted to do with his life and so he made the choice to follow his dreams. He moved to New York City and enrolled in the program at the American Musical and Dramatic Academy in 1992. This is where he received formal training as an actor. After he finished his program of study he began his career as a professional actor.

Manji married Taslim Manji, his wife and the couple had three children together. They are still married and they live at their residence in Studio City, California. This is where Rizwan must live to be closer to work. We also learned that his religion and spiritual beliefs are very important to him. To his fans, he is a versatile actor, but when he’s not performing in front of the camera, he is home with his wife and children in his role as husband and father.

Rizwan’s first role as a professional actor was in the movie “Sue.” He appeared briefly in a minor role as a newsstand owner. The following year he was cast as a young Arab in “Too Tired to Die,” followed by a series of minor roles such as a club patron in the movie “Vig,” as Ramesh Chopra in “Don’t Explain,” and as Ceasar Alexander III in the short film “Contagious.” In 1999 he landed the part of Dr. Patel in the television series “One Life to Live.” Another minor role was in a Geico commercial as an auction winning customer in the checkout aisle.

6. His work has been steady

As we reviewed Rizwan’s acting portfolio we were impressed with the amount of work that he has had. Although most of the parts were very small, there were a lot of them. In 2001, he appeared in “American Desi” and “Queenie in Love,” followed by a role as a party waiter in “The Guru” in 2002. After a brief lull in 2003, he was back at it with the lead role in the 2004 film “Fillum Star: The Peter Patel Story,” followed by a part in the video short “Hyde and Sikh.” 2005 was a very busy year for him as he appeared in “NCIS,” “Law & Order: Criminal Intent,” “Late Night with Conan O’Brien” as Santa Claus, as a car salesman in “Sleeper Cell,” as a series regular in “Damage Control” and a minor appearance in Twins: The Sam and Chris Story.”

7. He auditioned for the role of Gupta

When casting calls were made in 2010 for the cast of the NBC comedy series “Outsourced,” Manji auditioned for the show. He originally tried out for the role of Gupta, which is a larger part, but Parvesh Cheena was the actor that they chose for that role. The producers did like his acting though and they offered him the part of Rajiv, the assistant manager who is always coming up with some sort of scheme.

Rizwan Manji has appeared in so many minor roles and several recurring roles in television series’ that his face is very familiar to the viewing audience. He is a tremendous supporting actor and he’s made significant contributions to the success of the shows and films that he has appeared in. He has a massive number of acting jobs to his credit since he first launched his career in 1997. This speaks highly of his credibility in the business.

10. He has more work in the pipeline

We also discovered that Rizwan Manji has four more projects in the pipeline. He plays the part of Alim in a short film titled “Uncle.” Although there hasn’t been a lot of information released about the film, we do know that it has been completed and it is scheduled for release in 2020. He will also appear in a TV movie called “College” in the role of Mr. Rasheed. This project has also been completed but there has not yet been a release date assigned. He will also appear in the video short “One Hit Wonder” as Adam and in “Eat Wheaties! as Bruce Rapp. Neither project has a release date assigned, and both are in the post-production phase.