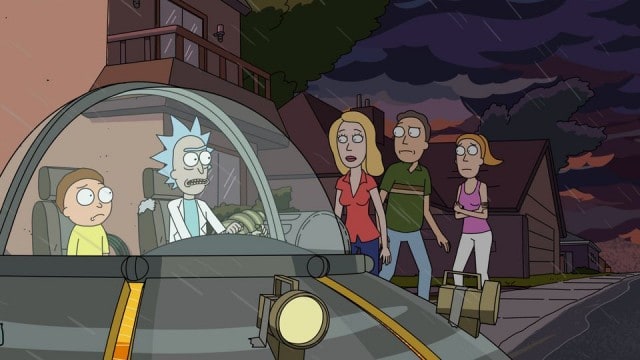 Well, it’s been quite the season for Rick and Morty, and what a way to finish things off! Over the course of the season, we’ve seen more of the same, but also immense amounts of character growth from everyone. The show has made sure that both Morty and Summer benefit from traveling around with Rick, and in weird ways, they learn life’s most important lessons because it’s the only thing he can give them. While Rick has definitely been the character to grow the least, I think that the second season really proved how much he actually loves and cares for his grandchildren and family. Rick and Morty is fun because the characters pretty much ignore each other’s flaws, and there are never consequences to come from it. Last night’s Season 2 finale, “The Wedding Squanchers,” reminded viewers that the show can get both dark and deep really quick when these personality traits begin to be addressed.

Rick is a jerk; he admits it multiple times because he knows that he’s smarter than everyone. Although adventures with him are never normal, Rick has a grasp for when things have gone too far. He has protected Summer and Morty a lot this season and even went as far as saving Beth and Jerry’s marriage; his family matters to him. “The Wedding Squanchers” had Rick acting pretty emotional the entire way through. Throughout the episode, he refuses to be happy for Bird Person, who marries Summer’s friend from high school, Tammy. He assumes that things won’t last, which he’s unfortunately right about when Tammy turns out to be an undercover agent for the Galactic Federation. After watching his best friend die, Rick sort of loses focus until Squanchy can tell him one last thing: “Get your family out of here.”

Rick then goes into protector mode and immediately assumes the worst of everything. The family can’t go home anymore and is miserably isolated on a tiny planet. It’s a tough time, but they are sticking it out because they won’t give up on each other. Jerry is the odd man out who wants to turn Rick in and head back to their normal lifestyle. Jerry is an interesting character, because he is pretty much disliked by his entire family, especially Rick. His character is the only selfish one in the episode truly able to call out Rick for the negative things he has done. It’s pretty sad to see Rick hear through the floor, but for once, Jerry is in the position to call out the situation for what it is.

This episode of Rick and Morty gets really heavy but also does a terrific job at revealing some honest emotions from every character. Rick, the smartest man in the universe, finally realizes how selfish he can be as a person and that the only way his family will truly be normal and happy is with him out of the picture. His goodbye with Morty is pretty sad, but it shows how tired everyone is from the events that occurred. Even Morty is mature enough to at least give Rick one last ultimatum, realizing that if his grandfather stays, it will keep their family closer but leaving will allow things to be normal and non-threatening. It’s a pretty tough idea to juggle with and really shows the depth these characters possess.

Rick and Morty has been an extremely consistent show throughout its first two seasons. Dan Harmon and Justin Roiland really seem to take their time with organizing everything to deliver fun episodes that offer a great story as well. Although it’s disappointing to know we probably won’t see Season 3 for another year and a half, I would rather see quality over quantity for a show like this. This season delivered on just about everything: story, humor, guest stars, pop culture references, and, most of all, character development. The cliffhanger is definitely going to leave my head spinning for the following year…we know that Rick has to get out somehow.