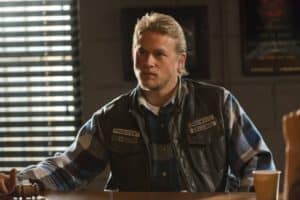 Usually by the fifth season of any show reviews contain platitudes like “better than ever” or “back in form”, in the worst case “hanging in there” or “limping along”.  The fact is, few shows get to a fifth season and still have enough gas in the tank–pun intended–to get much further.  I won’t lie, at the end of Sons of Anarchy’s fourth season I was a little concerned that SOA might be running out of pavement.  Romeo and Luis turning out to be high ranking CIA collaborators made for a sort of Deus ex machina, thwarting  Lincoln Potter’s perfectly executed plan to put the Sons behind bars for ever, and subsequently preventing the death of Clay at the hands of Jax.  By the time the big twist came the momentum was so strong that it was hard to see SOA ending in any way that didn’t include the death of Clay, and the arrest of the Sons themselves.  Killing that momentum with such a left field plot twist definitely was not one of SOA’s best moments creatively.  But all shows have their glitches–Remember the episode of Breaking Bad where Walt burned up the entire episode trying to swat a fly?–and the best shows are certainly entitled to theirs, as long as they prove they can recover.  Good news, SOA recovered and is “back in form” and “better than ever”.

I’ll start my take on the premiere, “Sovereign”, by addressing my biggest concern for season 5.  My biggest concern was that the CIA plot-line would be front and center.  So far, it seems more like an oppressive bit of subtext than something that fully occupies Jax’s mind. It is becoming, perhaps, a bit of a convenience for the Sons and the writers, but I’ll come back to that later. 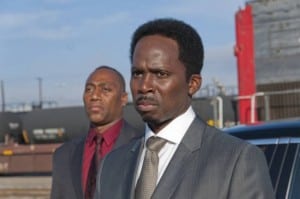 “Sovereign” continues a few of the plot-lines begun in season 4 and develops a few new ones.  The most significant is most definitely the blow back from Tig’s killing of Damon Pope’s daughter.  Harold Perrineau embodies Pope and his performance is right away brilliantly distinctive from the run of the mill television gangster.  Perrineau’s Pope is the kind of guy that exudes a sense of menace through super human stillness, but at the same time his character ripples with a cool brutal logic churning away below the surface. Pope’s persona is really a group affected character,  Perrineau’s supporting players do as much to infuse him  with that sinister facade as Perrineau himself does to seal the deal.  It’s a perfect illusion of the perfect bad guy.

On the other hand, we have Jimmy Smits Nero.  Nero is a somewhat reformed gangster and romantic interest to Gemma.  Smooth, carrying, and possessing an apparent excess of humanity, Nero is as fatherly as he is brotherly as he is a respecting lover.  There’s nothing to indicate we shouldn’t trust Nero, but this multi-faceted facade does raise a few red flags.

One thing that makes Sons of Anarchy so damn addictive is the sense of community that they have developed with Charming. 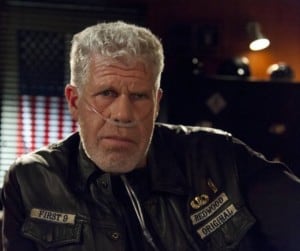 The Sons have always been dedicated to making Charming a place where nothing bad happens, unless they are doing it, but there has always been the possibility that Samcro’s actions could have implications for the town.  In season 5 we get to see this come to fruition in a big way, but along with it comes a mystery that could have major implications for the Sons of Anarchy.

What we don’t see is a lot of the CIA story-line, so far.  It is still pulsing away in the background, forcing Jax, as the new president of the SOA, to lie to his men and also forcing him to keep a spot at the table for Clay.  The situation feels much more like a time-bomb than a plot convenience, which is a great contrast to how it left some fans feeling last year.

As for Clay himself, this is where Sons of Anarchy really cooks.  There is plenty of action and violence, as you’d expect from SOA, but it is the intra-family subterfuge that has always kept the Sons of Anarchy universe so engrossing.

At certain levels, Sons of Anarchy functions like a sort of pulp soap opera that often reaches escape velocity into the realm of a richly fabricated character drama.  You could place the thanks for that transcendence on the performances of actors like the great Ron Perlman, whose craggy and nuanced Clay Morrow always has a way of making you second guess him even when his intent should be crystal clear.  Does Clay, now in a physically, mentally, and philosophically weakened state, still intend on challenging Jax’s takeover of the Sons of Anarchy?  With everything he has done, how could he possibly have an angle to play?  With its high concept villains, mysterious new allies, and who knows what else planned for the future, Sons of Anarchy loops back to its most successful signature plot device here:  control of the MC itself.  Clay is humbled, yes, but out of the game?  You’d be best advised to watch for yourself to answer that one.