Home
Television
Revenge
Revenge: The Trial of Daniel Grayson and a Shocking Discovery for Emily 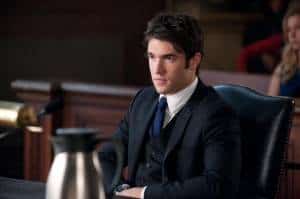 The moment we’ve been waiting for is here as Revenge has skipped forward a few months and the prince of Grayson Manor is finally getting his day in court. This exciting episode of one of TV’s best guilty pleasures brings us to day 15 of Daniel’s trial as Jack Porter comes back to town and Emily makes a disturbing realization.

Daniel’s day in court. At the beginning of this week’s Revenge, we learn that the prosecution has called Declan Porter as their final witness in their case against Daniel. While on the stand, the young Porter lies to the jurors and essentially throws his ex-girlfriend under the bus indicating she can’t be trusted as she was high and drunk the night of the party. But wait, he says, in a somewhat amusing line, she’s a ‘good person!’To fight the prosecution and build some sympathy for Daniel, Mr. Brooks, the Graysons’lawyer wants to call Emily to the stand. After all, she is the only one who is there by choice (or so he thinks) and not by obligation. Victoria is calling for ‘the performance of her life’which I’m assuming we will see some of in the May 2nd episode of the show entitled “Absolution.”

A mother will do anything for her son. As we saw in “Doubt,” when Victoria called in the hit on Daniel to get him out of Rikers, the queen of the Hamptons continued to pull many strings to protect her little boy this week. After a family meeting with Brooks where a juror was indicated as likely to find Daniel guilty, Victoria gets on the phone to Lee and asks him to take care of the situation. Lee threatens the juror that if there is not a hung jury or an acquittal she won’t ever seen her own son again. Victoria’s also not above persuading her daughter to use her feminine ways to get her way either. Such a great mother, she is! 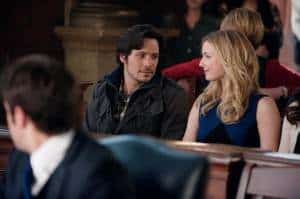 Jack is back. After seeing Ashley discuss Declan on TV while on his hunt for Amanda, Jack decides it’s about time he head back to the Hamptons to protect his family. Shortly after his return, he is seen by a less than stable and overwhelmingly jealous Daniel, at Emily’s house. With the two sitting next to each other at the trial, he becomes even more on edge and a dark drunk Daniel emerges. This love triangle continues to heat up as we push towards the end of the season and it has us wondering if any kind of decision is going to be made by Ms. Thorne between the two men. Jack also tells his younger brother and Nolan that he still has the blood stained hoodie from the night on the beach and realizes he needs to fess up and tell the truth. Of course, Emily won’t let that happen and she steals the sweatshirt and pretends to trash his house so that she can frame Lee. (More on that later.)

Dominik and Victoria. Victoria’s past lovah is still in the mix as well until Conrad pays him a visit. After informing him that he’s called all the galleries and had him investigated, he tells him to get out of town or he’ll be exposed for the forgeries he has committed. When Conrad tells Victoria of the mess he had to clean up with the situation, she is more than distraught. The question remains, will the painter be back? What else will we learn about Victoria’s past?

Charlotte falls further down the rabbit hole. Continuing her downward spiral, Charlotte takes her mother’s advice and attempts to seduce Declan to tell the truth and corroborate her story. Luckily Nolan stops them just in time. Out of drugs, she also reaches out to her old flame to be hooked up with some more. However, it’s not money he wants for the drugs, he wants her. What a little ho. 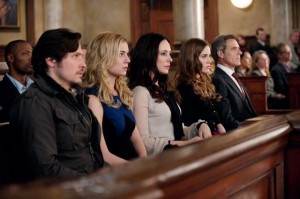 Emily’s neat little bow becomes unraveled. While it seemed that Emily’s schemes were working out just as she planned as she placed the stolen hoodie in Lee’s car framing him for the murder and therefore exonerating Daniel, protecting Jack, and casting a horrible light on the Graysons all at the same time, nothing is that simple in this world. Listening to the bug she placed in the manor, she hears Conrad’s phone call indicating Lee’s suicide and confession of Tyler’s murder was his orchestration. While she had always heard that her father died in a prison knife fight, it was actually the Graysons who murdered him and she realizes just how much the Graysons need to pay for their past sins.

So where do we go from here? In next week’s episode of Revenge, ‘Absolution,’we will see Emily learn more about her father’s death and Daniel will be released. So will he be found not guilty? We don’t know that just yet but for more information on the episode and to check out photos head here.

For all of our coverage of the show, including sneak peeks, reviews, spoilers and more, browse and bookmark our Revenge page. You can also watch the newest episodes from Hulu there.