Home
Television
Rectify
Rectify Review: The Chicken Or The “Yolk” 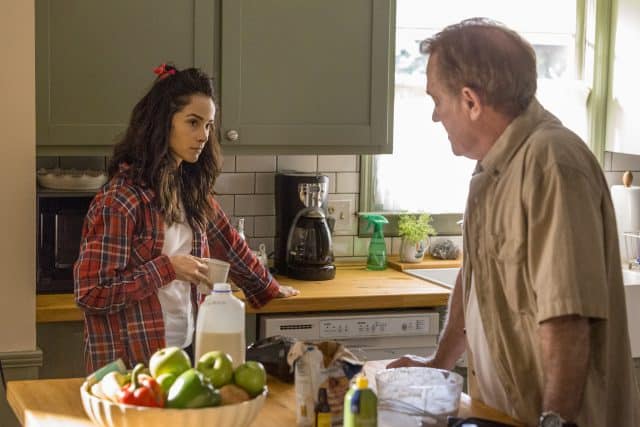 Have you ever watched an episode centered on one character and wondered what the other characters on the show were up to during that time? Rectify has answered that question for us.

This week on Rectify: While Daniel was dealing with his latest crisis, the Holden/Talbot clan were busy trying to move on with their lives back in Paulie. Amantha runs into an old friend when her car breaks down, and Ted Sr. comes to her aid. Teddy, frustrated with his ever-present father and marital situation, proposes a deal with Amantha. Janet is frustrated that she hasn’t heard from Daniel. Jared goes camping. Trey Willis is released from jail.

There was a lot happening in this week’s episode. Last week eased us back into the normally slow but not sluggish pacing of the show, focusing only on Daniel. This week sped up just a little, as it reintroduced us to everyone else (and then some). So while the episode was “faster”, some wonderful character moments shined through.

Amantha’s crisis is apparent. She and her mother are in similar predicaments. They’ve dedicated so much of their time over the last 18-20 years trying to free Daniel from prison, which has caused their post-appeal, post-Daniel lives to spiral out of control due to lack of direction. The metaphor with Amantha’s car was pretty direct, really. There was a part missing or damaged, which caused it to veer off track. Janet, by crushing every one of Trey Willis’ eggs at the supermarket, was able to take back some of the control she feels she’s lost. These small gestures on Rectify turn into larger, relevant illustrations. Rectify has this way of showing the beauty of life’s simplicity.

The quality of the acting on this show is stunning. So much of each scene is minor, close up nuance that the average TV viewer seeking the next exciting thing would look right past it. But it’s no surprise to me that multiple stars of Rectify have already been on network hits for the last two months. Abigail Spencer and Clayne Crawford bring such distinction to Amantha and Teddy. Now if we could just get Aden Young on an Emmy-contending cable show…

The best part about Rectify being so true to life is that it makes you laugh in the way that only real life can, and it makes you feel for people in such a real way. I wish it was never ending.

Amantha, Janet, and the rest of the family deal with life after Daniel on this week’s compelling episode of Recitfy.