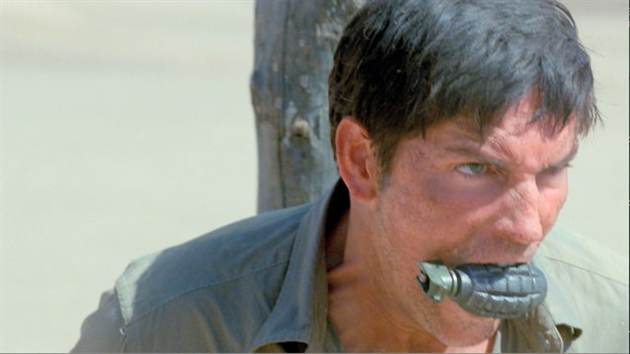 The second episode of The Prisoner, “Harmony,” started just where “Arrival” left off. As 6 lies unconscious on a sand dune, he has a flashback to going to his apartment with Lucy. 6 wakes up, seeing flashes of a young boy on a beach. Suddenly, he is approached by a man, who is very glad to see him.

6 returns to the Village, where 2 informs him that the man who rescued him is his brother. He shows 6 evidence of the two together as children, and then tells 6 that he has scheduled him for therapy, or “the talking cure.”

6 returns home with his brother, and is recognized by his brother’s family. While they are happy to see him, they all crowd around to watch the soap opera, which appears to be all there is on television. 6’s neice is able to recite many of the major plot points of the soap, and the entire family is very immersed in it.

Meanwhile, at 2’s palace, 11-12 sneaks into his mother’s bedroom, briefly sitting beside her on the bed. He soon hears 2 approaching, and hides outside the window, watching as his father enters and gives his mother some pills. As 11-12 looks on, his father sits down at a table beside the bed and begins to eat.

6, meanwhile, approaches his brother, who is fixing the bike. 6 tries to get his brother to admit that he’s lying, but his brother will do no such thing, instead becoming distraught and leaving, wishing for 6 to acknowledge that he is indeed part of the family.

6 then goes to therapy, where he is put in a dark room with a therapist named 70, and a shadowed man in the background. The two debate on whether or not the Village is real, and 70 tells 6 that he can’t cure his own thinking. 6 reflects back on his meeting with Lucy, where he found out that when she borrowed his phone, she did not make a call on it. Instead, 6 tells 70 about seagulls and the beach, two things which 70 does not know of.

6 then discovers that the shadowed man behind 70 is actually another 70, who reflects on the meeting while the other 70 engages the patient. 6 decides to leave, but 70 tells him that it isn’t important for him to tell his thoughts to 70, only that he has the thoughts.

6 leaves, and is taken to work by his brother. They work at a bus depot for a tour company. His brother tells 6 that he’s going to go out on the town with the bodys before long, and have a few beers. A faraway shot through a closed-circuit camera indicates that someone is watching the conversation take place.

2, meanwhile, goes to meet with the two 70s, asking them about 6. When 70 isn’t sure, 2 asks the 70s to give him a therapy session, supposedly curious to see what makes himself tick. 2 reveals to 70 that he is the reason his wife is the way it is, and worries that if his son knew who he truly was, he would not like him very much. 2 then asks 70 if he likes him, but 70 is reluctant to respond, citing that he doesn’t really know 2. 2 then begins to insult 70, telling him that he does not believe in “the talking cure,” and instead only wants 6 to believe in it.

As 6 drives his supposedly first tour bus (with his brother narrating the tour), he looks in the rearview mirror and sees one of the passengers winking at him. 6, after a short tour around the Village, drives out into the desert for no apparent reason, finding an anchor lodged in the sand. The passengers, confused, all crowd out around the bus. 6’s brother tells 6 that he needs to show him something. Taking him to an old abandoned train station with a few tracks, his brother tells him that these “ruins” are where they used to play all the time. 6 admits that he does feel some belonging at the ruins, but is still skeptical.

Returning to the bus, 6 has a flashback once more of Lucy, where his growing suspicions about her are starting to grip him. He then has a vision of 2 on the bus, asking if he knows the way. The tour continues to the Palace of 2. Suddenly 2 comes out and enters the bus, giving a free vacation to 6’s brother and his family. His brother urges 6 to accompany them.

6 soon ventures to 313’s home, and finds that hse has confiscated his pictures, such as the drawing of the Statue of Liberty. She claims she did it because she liked them, and 6 seems to believe her. He flashes back to his meeting with Lucy. When she asks him why he is so suspicious of her, he tells her that it was because he worked for a company that specialized in CCTVs, and he eventually resigned. She tells him that he needs a distraction.

6 soon goes to therapy, but instead of giving the therapist any viable information, he begins reciting the complicated love triangles of the soap opera. He then tells 70 that he is a prisoner int he Village, whether he knows it or not.

6 then travels to the ruins with 313, and finds a box buried under the tracks, with a note hidden inside by himself when he was eight years old, along with a picture of himself. He doesn’t believe that this a legitimate fact, but 313 tries to convince it it is. 6 then has yet another flashback to his time with Lucy. When she asks him why he resigned, he tells her that after finding a change in several people whom he watched on the CCTVs, he was told to cease and desist from a higher-up.

Back at the village, 6 is visited by the woman who winked at him in the bus, who tells him that she was on the tour bus because she’d heard the ocean in the desert, at one point. The two take a taxi ride from 147 out into the dunes, but she doesn’t hear the sound. As 2 looks on through several hidden cameras, 6 realizes that he’d forgotten all about the vacation planned for that day, and rushes back to the bus stop, where his ‘family’ is waiting for him. 6 begins to drive them to the “Escape Resort” (which isn’t so far away from the Village) when he takes a detour to the anchor. Falling to his knees at the anchor, he begins screaming at the sky. He then has a vision of being chained to a pole by 2, and having a grenade shoved in his mouth. 2 teases him with water just out of reach, and the grenade explodes. 6 wakes up on the bus, where his brother is shaking him. 6 apologizes to his brother for denying that he is his brother, but his brother then reveals to him tearfully that he has been lying — he’s not actually 6’s brother. He then asks 6 for help.

At the resort, 6 talks to his ‘brother,’ about the existence of another place, though they are being watched by the hidden cameras once again. 6 assures his ‘brother’ that there is another place, and tells him that when he finds a way out, they’ll be the first out together.

They then return to the Village to meet with the woman who claims to have heard the ocean. Travelling out into the dunes, 6’s ‘brother’ is afraid that 2 will find out. After walking for a while, they soon discover a boat — and then they find the ocean. 6’s brother, in his delight, runs out the ocean and begins to play in it. However, in a scene reminiscent of the flashbacks had been having, he watches his brother drown as the giant white ball, though travelling underwater, pushes his brother underwater and drowns him.

6 flees, and returns to the spot with 313, though the ocean is gone, replaced by desert. When 6 tries to inform his ‘brother’s family about his brother’s death, they only laugh hysterically at him, as does 2, who is watching from afar. 6 is then straitjacketed and placed on a gurney at the mental institution. While 6 tries to resist (shouting at 2 that he is “not a number”), he eventually gives in, screaming that he “is 6” as he is wheeled away through some double doors and out of sight. 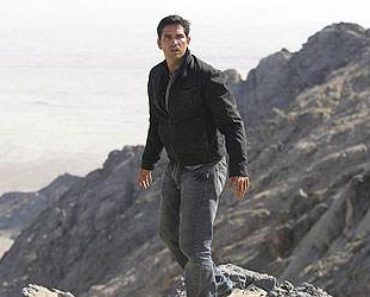