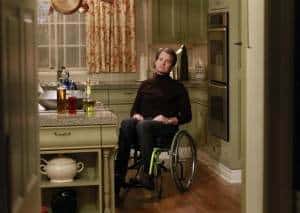 I was taken by surprise when at of tonight’s episode, the announcement over the preview declared that there were only 6 new episodes remaining before the big series finale. Sure, I’m no stranger to knowing how the television hiatus schedule works but 6 episodes to tie up the rest of the series? I suppose it’s time to give Desperate Housewives a deserving kudos because right now, there’s so much going on that I have no idea how mysteries and storylines are going to be wrapped up in such a short amount of time.

At the Scavo household, Lynette and Tom express their concerns over Porter’s decision to raise Julie’s baby. Ever the optimist, Porter tells them that he got a job as a waiter at one of the local restaurants. The downside? It doesn’t provide childcare. Naturally, he asks his loving parents for help but they don’t exactly budge (even after Porter tries to butter them up by saying he’s going to name the baby after Lynette.) At the Solis household, meanwhile, Roy is still crashing with Gabrielle. With Carlos finally on his way home from rehab, however, Gabrielle is finally tired of sharing her house and just wants him back with Karen.

As for Bree — she’s just really irresistible, isn’t she? First Chuck got upset when she refused his engagement, and now vengeance obsessed Orson is doing anything and everything he can to extract his revenge from when she broke his heart. He shows her pictures of his cottage in Maine, trying to get her to agree to move there and almost slips up when he mentions knowing about the second letter, which Bree knows she hasn’t told him about. He manages to save himself by turning the conversation into how her friends can’t be trusted.

While Mike brings Julie back to school, Susan finds Porter, who tells her how he got a job but that Lynette doesn’t think it’s good enough because it doesn’t provide childcare. Susan, of course, seizes on this opportunity to enthusiastically tell Porter that she’s happy provide daycare for her new granddaughter. Predictably, as soon as Lynette sees the two of them moving furniture together, she becomes suspicious and then upset, especially when Porter asks for the bassinet that the children all slept in.

Gabrielle tries to leave flowers at Karen’s (pretending they’re from Roy, of course) but Karen sees right through her. An argument about why she won’t take Roy back leads Karen to collapse, and at the hospital, Gabrielle finally learns the truth about her cancer returning — and how Karen knows she’s not going to beat it. Gabrielle realizes this is why she’s been pushing Roy away, and tries to persuade her to take him back. Karen refuses, though, begging Gabrielle not to tell him. Bets on if Gabrielle will heed this promise? I’m thinking not….

At the hospital, Renee tells Ben that she met with his loan shark and settled his account. Ben gets upset because he doesn’t want her to be involved, but Renee is unfazed. She does get a bit of a wake-up call about her involvement in the situation, however, when the loan shark comes by her house claiming that he needs more money. Tough Renee quickly puts him in his place, although she soon realizes it probably wasn’t the best move she could’ve made. Tom meanwhile, comes by and tells Lynette that he’s taking the kids for an entire week so Lynette can have some space. This goes over well until Lynette learns that Jane is going to be watching Paige while Tom’s at work — another act of her feeling like she’s being replaced (to be fair, Lynette, this is your own fault…you didn’t want the responsibility!) And just as Porter suspected, Susan is taking her ‘Grandma’title to the extreme — even after learning that Porter is planning on naming the baby Lynette (apparently that wasn’t a ploy for guilt after all.)

Gabrielle tries to get Roy to open up about his first wife, and finds out that she died two weeks before their anniversary. Upon Roy’s tearful confession about losing someone and telling them everything in the world and being there for her, she breaks her promise to Karen (who was betting, really?) To be fair, the promise was broken out of compassion and love, not selfishness, so score one for Gabrielle Solis.

Bree agrees to leave for Maine with Orson, but not before trying to engage in a side trip to his apartment. Orson attempts to heed her off, but Bree pushes and he eventually gives in, though he manages to stall her enough to get rid of the evidence. His stealthiness leaves something to be desired, however, and upon seeing an unopened letter and a stalker type picture in the garbage, Bree realizes exactly what Orson has been doing. Orson admits everything, but says that he only did it because he wants to be with Bree and he knew that he didn’t stand a chance if he couldn’t have her all to himself. He passes his actions off as consequences of intense love, but Bree doesn’t believe him. I have to hand it to Desperate Housewives — usually mysteries like this are dragged out over a number of episodes and become predictable. This year, we’re rolling through the reveals and twists, and I wouldn’t be surprised if this isn’t the last we’ve seen of Orson Hodge.

Lynette soon finds that being home alone with no kids is not only boring, but also lonely. She comes by to ask if Susan needs help with nursery, and realizes just how much she’s been left out of the loop. And here we find out that as suspected, Susan isn’t exactly happy that Porter is planning on naming his child after her best friend. She wants to name her after her mother, Sophie, and the two begin to argue over ‘correct’parenting. In classic Housewives fashion, they end up screaming at each other over a tug of war on a bassinet on the front lawn.

The husbands decide to take matters into their own hands. Mike comes over and visits Lynette, trying to give her perspective on Susan’s actions while Tom talks to Susan and tries to get her to ease up on Lynette’s feelings. It was a nice moment for all the actors, and it that caused me to realize how far they’ve come in their friendship. The girls eventually make up and begin working together again as best friends should in these types of situations.

Roy goes to visit Karen in the hospital, and she already knows that Gabrielle can’t keep her mouth shut. Karen tells Roy that she didn’t want to put him through the pain of losing another wife, and Roy tells her he’s staying with her no matter what. Personally? I think at this point it would be entirely predictable and sad to kill off Karen, but if they do, I hope she finds happiness with Roy like we saw in this moment.

Renee calls Mike to let him know about Ben’s situation, and notices a light in Renee’s apartment. He finds the loan shark has broken in and a fight ensues. Meanwhile, Carlos finally comes home and Gabrielle presents him with a fully decorated house, telling him she doesn’t want to take him for granted anymore. Turns out Karen’s story hit her hard, and made her realize that she hasn’t been treating Carlos with as much respect as she should. I really like how in this final season, the focus seems to be on the relationships between the women and their families, as opposed to the mysteries of Wisteria Lane.

Bree, meanwhile, is still trying to recover from her discovery of Orson. He tries to call her repeatedly, but she tells him she never wants to speak to him again. Orson finally tells her that he’s not coming back, implying suicide, but instead, we see him drop a letter to the Fairview Police — no doubt alerting them to her crimes.

So, what do you think is going to happen to Orson? And with only a few episodes remaining, do you think we’re going to get even more twists?