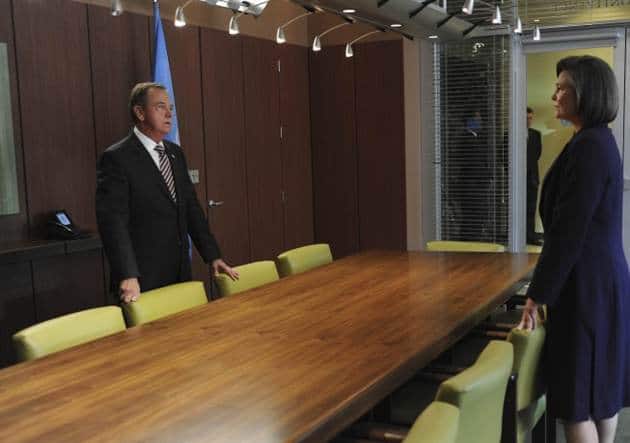 Another year, another messed-up President on 24. Really, they’re all either dead or traumatized. Now it’s President Taylor’s turn, as she has to deal with the fact that a visiting dignitary has just died on her soil, which means the end of her peace efforts, and one very emotional Jack Bauer. Everyone needs a hug!

Jack’s decided he’s going to Los Angeles now that he has nothing left to do, and leaves Cole to handle cleanup. Of course, it’s not so simple. Renee has been recognized by one of the bad guys from her stint with the Russian mob six years ago, and he’s off to put an end to her and to Jack. Really, I’m surprised that every single bad guy doesn’t know of Jack Bauer by reputation alone after however many years he’s been busting heads.

Back on the Presidential side of things, Cherry Jones continues to show us why she won an Emmy in this role last season, as President Taylor tries to console both Jack and the Hassan family while trying to save the remains of her peace process. Her idea is to convince Hassan’s wife to take over in his absence, since she believes in the same things her husband did and can be trusted to follow through on his efforts. Mrs. Hassan thinks this is an insane idea, but it’s better than letting her late husband’s opponents mess up everything he worked for, so she agrees.

At CTU, Chloe gets a phone call from President Taylor’s aide, who wants to tell her that Hastings is about to get booted from his job and he thinks Chloe should be in charge. Which makes so much sense as she’s a computer geek who has, as far as I know, zero supervisory experience outside of her department, and we all know how good her social skills are. You’d think there would be quite a few people above her in the chain of command. To his credit, Hastings takes it on the chin.

Jack and Renee go back to his apartment, which is really a convenient excuse for them to have their much-hyped romantic moment. On one hand, I’m glad that the guy is finally happy with someone who isn’t blonde and vaguely airheaded (yes, Kate and Audrey, I’m looking at you), but on the other, it surprises me how little I care about this pairing. Maybe because it’s been patently obvious that this is coming for like the last two years. I’m suspicious that may also have something to do with why Renee’s former love interest (and better love interest IMO) Larry Moss bought it last season. Although I like Jack and Renee as characters, I don’t care for the pairing. I really don’t need to see them sleeping together either, though at least it’s just for a second as a guy plots to kill them from across the street. I hope he’s going to shoot, but alas, it’s a commercial.

The President finds out the Russians (why is it always the Russians?) are ticked off about Mrs. Hassan taking over for her husband, and goes to see Ethan, who’s looking a lot better. Ethan’s idea is to call up Charles Logan, who’s been creepily calling him going ‘Look at me, I can help you even though I’m evil!’President Taylor is not impressed. She calls him in anyway, and Gregory Itzin is just as evil and smarmy as I remember, which is awesome. I only wonder what happened to Aaron Pierce, because Glenn Morshower hasn’t turned up this season. He’s the only person other than Kiefer Sutherland to appear in every season, and I’d hate to break that streak now.

Meanwhile, Hastings leaves Chloe in charge just as — on cue — Samir starts to flatline and dies on the table. She and Cole try to figure out what just happened to him, as she’s suspicious that he was intentionally bumped off. 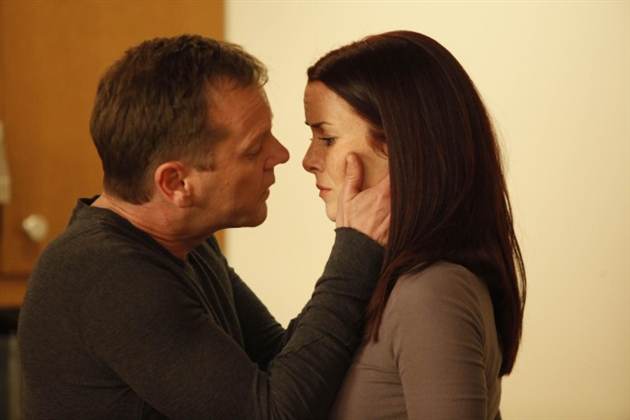 She puts a call into Jack. Unfortunately, a post-coital Renee answers the phone, and just miraculously comes to the realization that she knows the Russian mob guy who recognized her earlier. Thankfully, she gets shot by the sniper. That’s what you get for trying to screw around when there’s a national crisis going on. ‘Why would anyone want to kill Renee?’Arlo asks. I don’t know, maybe because I’m sick of Jack mooning over her already?

For all my dislike of the pairing, though, I’m honestly shocked a moment later when Jack gets the news that Renee is dead, and the silent clock closing out the hour confirms it. Regardless of my dislike of the pairing, it’s a surprising story move, and one that has a lot of potential. That’s truly a gutsy move, considering how much the writers have hung on her character, and it again proves that 24 will do the unexpected. It also sets Jack up in an interesting place: we know he’s coming to the end of his story, the Russians have just offed the woman he loves, and he has literally nothing left to lose. (Unless you count Kim, Stephen and baby Teri, but are we going to go back to them? Who knows.) Jack is a blank slate, and he’s pissed, and we all know what happens when Jack Bauer is pissed. All hell breaks loose.

What did you think of this latest plot twist? Where do you think the show will go from here? Talk about it below.