Home
Movies
Rebooting The Dream Team: Is It Possible? 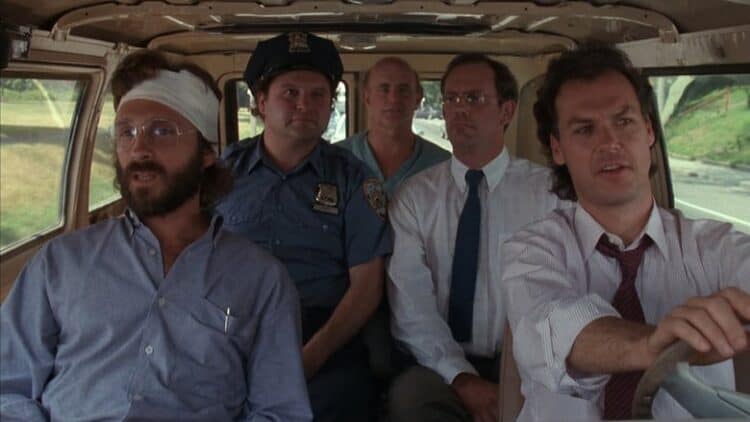 It’s a little saddening to realize how many people these days don’t recall several movies from the 80s that might not have been given good reviews but were still comforting tales that were enjoyed by those of us that aren’t as harsh as movie critics. The Dream Team, a forgotten gem from 1989 starring a few very well-respected actors, is one of those movies that a person might watch, enjoy, and then come back to eventually to see if it was as good as they thought the first time. While it’s true that not every movie ages well, anyone citing controversy of any sort with this movie might need to loosen their sense of social outrage just a bit and realize that there was nothing wrong with this movie, even though it dealt with mental illness in a way that was both comical and touching at various moments throughout its length. The Dream Team doesn’t feel like it’s even a consideration when it comes to a reboot, but trying to break this story down and figure out how it could be updated and brought back for another run feels like it could be fairly simple.

The story isn’t too complicated really since it starts by introducing the four patients that will be key to the story, Billy, Henry, Jack, and Albert. Each man has a very different psychosis since Albert doesn’t speak and is kind of a kleptomaniac, Jack thinks he’s Jesus Christ, Henry thinks he’s in charge of everything, and Billy has serious anger issues, not to mention that he’s a compulsive liar. One can’t help but think that these men belong where they are to keep them safe and to keep the general public from having to deal with their antics. But as it’s also established early on, these men aren’t entirely ready to take on the field trip that the doctor attempts when he decides to take them to a baseball game to see how they’ll react in a supervised capacity.

To be fair, that sounds like a fairly bad idea when dealing with mental patients, but it does make for a comedic performance that sees Michael Keaton and Christopher Lloyd shine as Peter Boyle and Stephen Furst are enjoyable, but not quite as impactful. It’s Keaton’s manic, aggressive energy that makes this movie work from his end, and Lloyd’s fairly clueless but genuine acting that helps his character stand out. Trying to cast characters who would be able to emulate the type of characters that Lloyd and Keaton brought to life would be tough, but it would possible. Even the main point of the story might be interesting to think about, though the updates that would be needed would be considerable enough since in the last three decades things have changed quite a bit. Plus, getting the patients out of the hospital without some truly screwy idea to see a ballgame might present at least a mild challenge for whoever was brought on to write the script. The two biggest hurdles feel like the use of mental issues for comedy and the possibility that people would see this as controversial, and the general feeling of how they would interact with the outside world.

But this still feels like a minor issue at best despite the outcry when it comes to mental health and how it’s used in movies, as there are still plenty of modern movies that take advantage of the stories that are there to be told. The comedy required for this movie to work wouldn’t exactly exploit the mental conditions of the characters since if anyone wants to take the time to watch the original they’ll see that yes, the characters do have their own issues, and yes, they do show remarkable progress once back in the world. But at the end of the movie, they’re not miraculously cured, though it does appear that the doctor’s idea did work at least a little. If anything, the movie gives one the idea that while the patients aren’t made better through a miracle involving movie magic, they are allowed to feel as though they’ve been given a little more control throughout their lives, which is an inherently positive note.

Mental issues in movies are nothing new and those that want to state that using them for comedy is offensive might need to remember that such an element of storytelling is still widely used today. Granted, there is a need to make certain that things are treated in a manner that indicates a certain level of respect that needs to be given. But otherwise, The Dream Team could be rebooted without a lot of difficulty, and it’s even possible that it becomes even more memorable, especially if the original actors, those who are still around, were convinced to return for cameos or even bigger parts.