Home
Movies
Who is the Real “Slender Man?” 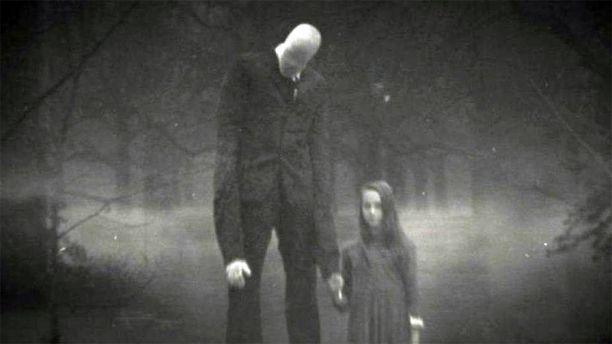 The Slender Man is an excellent example of creepypastas, which are short horror stories created by users that are perfect for being spread through the Internet. Sometimes, creepypastas can be as simple as images. Other times, creepypastas can feature a fair amount of text as well, though this tends to be rather succinct in nature. In the case of the Slender Man, it started out as a Photoshop-ed photograph combined with snippets of text posted by a user called Victor Surge on the Something Awful forum, which inspired other people so much that his post led to the creation of a full-blown mythos surrounding the character.

In short, the Slender Man is a supernatural horror of some kind. Generally speaking, it looks like a thin humanoid figure with rather elongated proportions, wearing either a black suit or something similar. However, its most striking feature is its featureless head. Capabilities-wise, the Slender Man is often depicted as being able to teleport as well as either cause madness or reduce people to puppets. With that said, it is important to note that there is no real canon for the Slender Man, meaning that different people are going to accept different aspects of the mythos as being “real” for their personal interpretation.

Why Are Some People Reacting In a Negative Manner to the Upcoming Slender Man Movie?

Regardless, the Slender Man has become popular enough that people have produced a wide range of media based on the mythos. However, Sony Pictures has teamed up with three production companies to create a feature film based on it, which is interesting in that it will have the involvement of the person who came up with the concept, whose real name is Eric Knudsen. Said movie is expected to come out on May 18 of 2018, so it should come as no surprise to learn that the marketing for the movie is starting to ramp up.

However, a man named Bill Weier spoke out against the upcoming Slender Man movie when its trailer was released, going as far as to advise local theaters against screening the movie because of what he considered to be its distasteful nature. This is understandable because Bill Weier is the father of Anissa Weier, who is one of the two 12-year-old girls who committed the Slender Man stabbing.

For those who are unfamiliar with the case, the Slender Man stabbing was an incident in 2014 which saw Anissa Weier and Morgan Geyser attacking one of their mutual friends Payton Leutner in a forest in Waukesha. One of the perpetrators pinned Leutner, while the other perpetrator attacked her with a knife, resulting in 19 stabs before the two left. Fortunately, Leutner managed to drag herself out of the forest and contact a cyclist, who was able to get medical assistance to her in time to save her life. When Weier and Geyser were caught, they claimed that they did it because they believed that killing their mutual friend would enable them to become proxies of the Slender Man and protect their families from him, which was relevant because they believed it to be real rather than just a creepypasta. Currently, both Weier and Geyser have pleaded guilty because of a plea deal, with the result that Weier will be spending up to 25 years in a state mental institute while Geyser remains to be sentenced.

As a result, it is no wonder that Bill Weier is upset about the upcoming Slender Man movie. This is particularly true because some people suspect that the movie will be featuring elements from the real life case. So far, the trailer has not provided enough information to say whether this is true or not, but if it is true, it would certainly be extremely tasteless in nature.