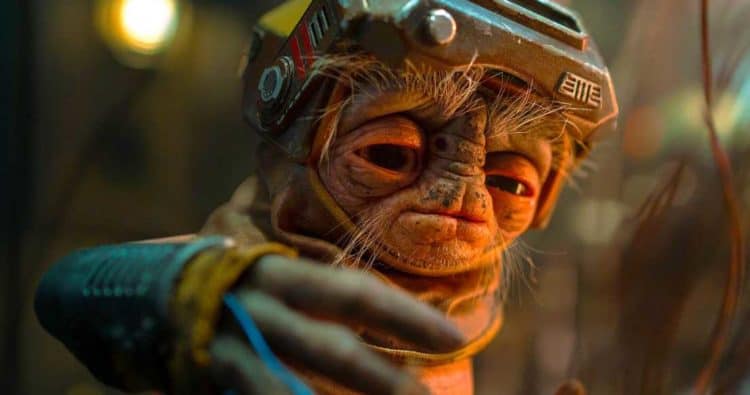 It’s kind of difficult to call every character or creature in Star Wars ‘cute’, but as Lauren Thoman of Looper indicates the lot of them are pretty interesting. Despite how many new and known races showed up in The Rise of Skywalker we’re only going to cover a few that really stood out, even if for just a brief amount of time, since each one on the list had at least some purpose and was deemed as important by the story line as well as the fans. Whether or not we’ll see them again in any future movies is hard to say since it does sound as though Disney will be taking a break from the usual one movie per year when it comes to Star Wars. But given that it’s such a huge money-maker and people love purchasing merchandise based on the shows and movies it’s safe to think that we might see a few of these creatures again in the years to come.

Here are our favorite creatures/characters from The Rise of Skywalker.

Let’s be honest, Klaud isn’t someone a lot of people are going to be able to remember after a few months, but anyone that gets permission and has the ability to work on the problematic Millennium Falcon, and works so closely with several key members of the Resistance, is bound to be someone that has some kind of value. How Klaud manages to work on anything with his big fleshy body is hard to rationalize, but obviously he’s someone that carries more than a little bit of importance since he’s seen around at least a couple of main characters, and he survived the battle. It’s possible he could hang around for a while.

When you’re in the spy game it’s fair to say that your life is going to be on the line with just about every mission you undertake, and poor Boolio caught it in the neck, literally, when it was discovered that he was passing sensitive information about the First Order to the Resistance. Unfortunately he didn’t make it out of this movie but there could be an anthology that might come out with him as one of the characters that gets his own short story. That seems only fair for a character that was there and then gone within a very short amount of time. After all, someone that manages to relay that kind of information should get some attention.

It’s kind of hard to guess just how evolution works when you get a group of aliens that look like they should be aquatic by all rights living in the middle of a desert region. But they did seem friendly up until Poe started tinkering with one of their speeders so they could liberate it for a while. At that point the natives started getting a little grumpy and rightfully so since anyone taking what’s not their’s kind of deserves it. The fact that the speeders were eventually destroyed doesn’t really help anything probably, and the goodwill of the people was probably lessened just a bit because of it, though they were left behind in a big rush.

It seems silly to think that riding a horse-like animal along the deck of a star destroyer would be that effective, but then again there’s no way for a signal to be jammed if one’s ride isn’t electrical in nature. It still seemed kind of risky to ride these creatures into battle though since a direct or even glancing hit from a laser cannon would have fried them. In essence these creatures are what you’d get from crossing a boar with a draft horse, something that is quite impressive but looks as though it could gore you, trample you, and then not care a bit about it when all is said and done. In other words a perfect mount to go to war with.

Somehow people have really taken to Babu Frik for some reason, and in some cases people have even seen him as cuter than Baby Yoda (aka the Child). Scott Craven of USA Today has more on this. That’s highly debatable since the little green guy from The Mandalorian is undeniably cute, while Frik is like an old but interesting individual that spouts off whatever he feels is wisdom. Granted he is an important character in the movie and he does have a larger than life presence despite his diminutive size. But whether or not we’ll see him again is kind of up in the air since as I mentioned the movies are going to be on hiatus, as we’ve been told thus far, and it could be a while before Babu gets any more screen time.

There were of course a lot of creatures that we remember and a few other new faces, but these were undeniably the best.