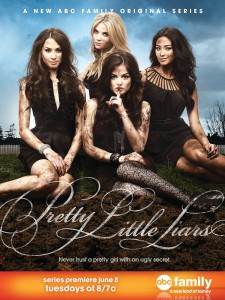 The drama, which is also based on a book series of the same name, has been called “‘Desperate Housewives’ for Teens.” Does it live up to that moniker? Well, if one were to look at the last frame of tonight’s premiere episode, they would think it was a dead ringer to the shenanigans of Wisteria Lane. But the truth of the matter is that while ‘Desperate Housewives‘ is more of a dramedy, ‘PLL‘ is all about the dark secrets only and if there is comedy there, then I have yet to see it. But I am getting ahead of myself, let’s go on with the recap.

Prelude to the Lies…

On a stormy night in Rosewood, Pennsylvania, Aria Montogmery (Lucy Hale), Emily Fields (Shay Mitchell), Hanna Marin (Ashley Benson), and Spencer Hastings (Troian Bellasario) are having a sleepover in a garage/guesthouse combo. Their fearless leader, Allison DiLaurentis (Sasha Pieterse), shows up and immediately we know she’s queen bee when she hints at some of the other girls’ secrets from gate, and using said secrets to keep the posse in place. In Allison’s view, secrets are a way to keep friends together. Um… yeah.

Later in the night, the girls awake to the discovery that Allison is missing, with Spencer claiming to have heard their leader scream. Uh-oh…

A lot has changed since that faithful night, but one thing is still in tact: Allison still hasn’t been found.

Aria has returned with her family after a year long stay overseas on the anniversary of Allison’s disappearance ironically. The return home is not all rosy for Aria due to her father Byron (Chad Lowe) having an ugly secret that he wants Aria to keep from Ella (Holly Marie Combs), his wife and Aria’s mother. Take one guess on what that secret could be.

Seems that the other girls have all went their separate ways in light of Allison’s disappearance. Hanna is now the Queen Bee with Mona Vanderaal (Jarel Parrish) as her sidekick/subordinate. The two shoplift from the mall after catching up with Spencer, who has her own issues to deal with. Emily just feels ‘different’ and wants out of the small town life. Basically, all of the girls’ lives have gotten more complicated within the year since Allison’s vanishing. But things are about to get even more nerve-wracking for these darlings of Rosewood…

At a bar and grill, Aria meets a young guy named Ezra Fitz and the two bond over school, writing, and their aspirations of being a teacher, which leads to Ezra revealing that he is about to start teaching English locally. The conversation then ends up in the bathroom with the two of them learning to spell each other’s names with their tongues and lips. Hopefully, numbers were exchanged before that…

Aria gets to school after having a sour heart to heart with dear old dad about his cheating ways and meets up with Emily, who fills Aria in on the lay of the land since she left. Then Aria is met with ‘surprise’ #1: Ezra is her new English teacher. He freaks out before she does, but an impromptu text saves the day, which happens to be surprise #2, because it’s from “A”, which Aria deducts is Allison. The text says that “A” knows about Aria’s fling with Ezra and equates it to Byron’s knack for sleeping with his students as well. Hmmm….

Later, Aria remembers a day when she and Allison discovered Byron kissing another woman in a secluded area. The girls had stumbled upon this little faux pas after running away from Mona, who was a total nerd back then. Seems that Aria swore Allison to secrecy on her father’s infidelity, but will “A” keep the secret on lock?

Aria later talks with Ezra, who wants to call off their tryst (can it even be called a tryst if it was a one time thing?), which hurts Aria who wants it to continue.

Emily’s mother (Nia Peeples) makes Emily go and welcome the new neighbors who are moving into Allison’s old home, which apparently hasn’t been cleaned out since Allison disappeared. After being distracted by Allison’s things being put out on the side of the street, Emily meets Maya (Bianca Lawson), the new girl on the block. Maya takes an immediate interest in Emily and quickly reveals the bad girl side of her inquisitive nature to Emily by introducing her to weed. Later as the two are walking home from school one day, Emily is perturbed to see all of Allison’s things being tossed into the trash by garbage men. This leads Emily to reveal to Maya that she hasn’t gotten over Allison’s disappearance, which leads to a semi-kiss between the two new friends. Ah ha!

The next day after swim practice, Emily discovers a letter in her locker from “A”, stating that Emily has found a new kissing buddy since her old kissing buddy, Allison, has been out the picture. Scandalous…

Spencer is pissed when her sister Melissa (Torrey DeVitto) returns home and takes over the barn that Spencer has turned into a guesthouse with her own blood, sweat, and tears. While Spencer had planned on living there during her junior year, Melissa wants to stay there now while her own house is being remodeled; especially since her boyfriend Wren (Julian Morris) is staying with her as well.

After being snarky towards Wren, Spencer eventually warms up to the guy, but perhaps a bit too much. A flashback later reveals that this seems to be a problem for Spencer when it comes to ALL of Melissa’s boyfriends. In the flashback, Allison almost lets the cat out the bag about Spencer’s love for Melissa’s boyfriend of the time, who Spencer secretly kissed. Pissed at Allison’s attempts to “help” her, Spencer turns the tables on Allison by threatening to reveal “The Jenna Thing”. What the hell is “The Jenna Thing??!?” Whatever it is, it shuts Allison up quick.

Later that night while spying on Melissa and Wren, Spencer gets an email from “A” saying that if Spencer “kisses,” she will tell. Then to add to the creep factor, Spencer thinks she sees Allison in the window next door…

Pretty Little Girls Don’t Steal For Thrills, Nor Do They Puke Up Their Meals

Hanna now relishes in her role as the new queen of mean after being at the bottom of the clique for her weight problem. Maybe that’s why Mona is her literal partner in crime? Nerds with newfound power are dangerous, people. Ask Willow Rosenberg…

Hanna’s mother Ashley (the unconquerable Laura Leighton) lightly berates her daughter for not mentioning that Ella Montgomery was back in town, which meant that she had to retell the horror story of her marriage collapsing. Hanna is over it and thinks that her father left the both of them and should be treated like a bad boyfriend. I see dating issues for this one in the future.

Before the two Marin women can eat their dinner salad (that Hanna has picked the croutons out of), they are interrupted by Detective Darren Wilden (Bryce Johnson), who has come to collect Hanna for shoplifting earlier at the mall. While at the police station, Hanna gets a text from “A” (ironically when she was about to eat a handful of Skittles), which advises that prison food will make her fat. Dun Dun DUN!!!!

Ashley later voices her utter disapproval of Hanna’s behavior, especially in a small town like Rosewood where image is everything. But she tells Hanna that she has everything covered and has taken care of the situation. How did she do that? Well, Hanna finds out later that night when Ashley returns home with Detective Wilden, slobbing each other up to the bedroom. Hanna is mortified and rightly so.

Emily and Aria meet up and discuss their messages from “A”, but neither girl comes clean about the dirt “A” has on each of them. They ponder if Allison is actually back in town and playing with them like a fiddle at Carnegie Hall.

Byron and Ella talk about life, but Byron nearly slips and tells on himself. I wonder how long this secret will last.

Emily walks home and sees police cars in front of Maya’s house and thinks her new “friend” is hurt, but Maya, who is safe, has something more heart-wrenching to reveal. The police found Allison… and she is dead. Say What?!?!?!

Eventually, Aria, Spencer, and Hanna all show up to the spectacle and the scene is reminiscent of when Edie’s house burned down on the pilot episode of ‘Desperate Housewives‘ with all the housewives outside watching the blaze. Anyway… The girls mention the “Jenna Thing” again and if Allison would spill it, but they decide that she wouldn’t do such a thing.

At Allison’s funeral, Aria shows up and makes up with Ezra, which means things are going to get ugly in that department. Later, 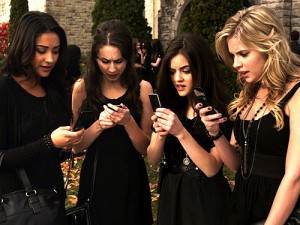 Allison’s mother sits all the girls at the front pew in front of the casket. There, the girls all reveal that they have been getting messages from “A”, who they all thought was Allison. But the biggest shocker is when Jenna Cavanaugh shows up with her brother Toby leading her into a pew, because she is blind!!! What the the hell did these girls do to that poor girl?!!? People wonder why Jenna is at the funeral, especially since she was never friends with Allison to begin with (and for good damn reason it would seem).

After the funeral, Detective Wilden adds to their dilemma by announcing that with Allison’s missing person case now being a murder investigation, he will keep a close eye to them. Then before the girls can even panic about that nonsense, they all get one final text from “A” for the night. The text reads, “I’m still here. And I know everything… -‘A.'”

– Who the hell is ‘A’?! Is the body they found really Allison’s or a poor victim of mistaken identity? Or is Allison actually dead and someone is playing a sick and twisted game?

– Can we list Spencer as our number one suspect in taking out Allison? She was the one who had the most beef with the Queen and also was the first to notice Allison was missing…

– “The Jenna Thing” seems like an extension to the secrets that can either be interesting or a complete red herring. Either way I want to know more…

– What about Mona? They did do that girl dirty all those years. Now that she has the clout, could she have taken out the Queen herself to get to that spot?

So what did you guys think? I liked it and it will serve me well for these next ten weeks since the show reads like a trashy beach novel. And I loved every minute of it. Stay tuned for all things ‘Pretty Little Liars’ here at TVOvermind!!!