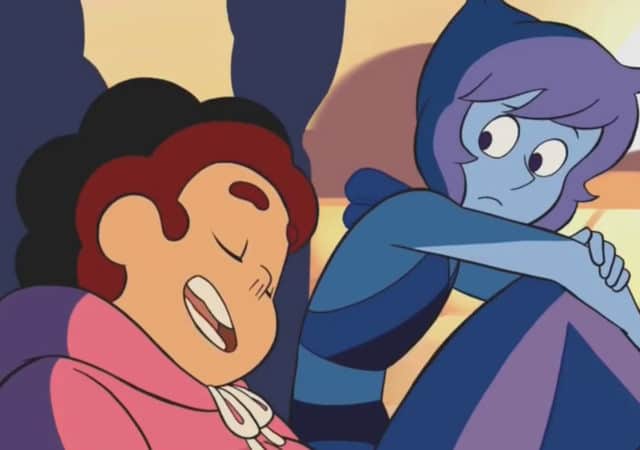 Someone hand me a brown paper bag because I just went on the craziest emotional roller coaster and I need to vomit out some feels.

If you hadn’t gathered from that over-excited, frantically typed excuse for an intro, Steven Universe just aired some new episodes and… wow, just wow, they went all out for these ones, and they did it smartly. The first episode of the two-part special was the more laid back of the two, gearing up for the second episode (I am actually shaking with how much I want to talk about part 2, so strap in) in a nuanced, emotionally dense way.

“Can’t Go Back” was about Steven reuniting with Lapis, turns out she just took the barn to the moon and has been hanging out on the Gem moon base ever since. Steven finds her using the moon base observation device to spy on the Gems in their every day lives. Why? Because she never wanted to leave and she already misses her friends, she misses Peridot. We then get Lapis’ first song of the series, a beautiful number that tells us how afraid she is of not being alone.

It sounds backwards, but that’s just it, that’s what extended trauma does, it makes you afraid to be happy, to be away from the thing you’ve known so long, no matter how terrible it was. Lapis was trapped in the mirror for so long, she was trapped with Jasper as well, so when she found a place to belong, she didn’t know how to respond. It seemed like living with Peridot in the barn was either like another form of being trapped to her, or she was looking for an excuse (the Diamonds coming) to leave, to forcibly isolate herself from others because loneliness is so familiar to her that she forgets how much trauma is behind that loneliness.

However, after talking with Steven, who provides a delightfully endearing therapy session of sorts, Lapis seems ready come back home, even if things are a bit different, she’s not as afraid. But, of course, nothing is that easy…

Steven has a dream about the Diamonds, and just the mere mention of them is enough to set Lapis off, and despite the fact that she was on the path to healing, she relapses and runs away again. She’s not like Steven and the others, she says, she has to be alone and safe instead of together and in danger, it is all she knows. She flies off, leaving Steven with the haunting events of his Diamond dream. What happened in the dream, you ask? Well… 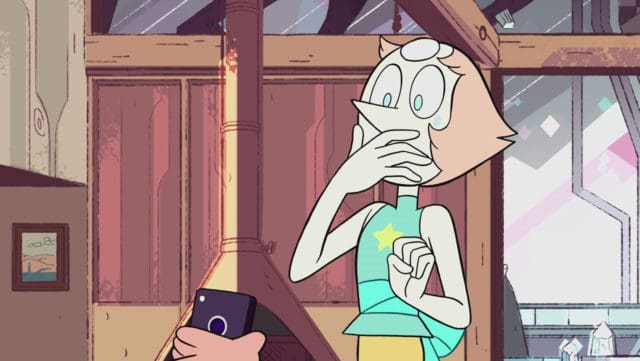 That’s what Steven saw in his dream and in “A Single Pale Rose,” he confronts her about it, making for easily one of the greatest episode of the series.

Steven approaches Pearl about what he saw but she can’t tell him about it, literally, she puts her hands over her mouth and ceases to speak. In a panicked state, Pearl walks away after putting her new phone in her gem, which starts to text Steven on its own. For some reason, Pearl cannot retrieve the phone from her gem and asks Steven to go in and find it for her, which leads him to various memories in Pearl’s past, all leading to the moment in question, the death of Pink Diamond.

And… it’s confusing at first. Steven finds his mother standing over shards of Pink Diamond… or are they? Rose is holding an in-tact diamond in her hand, and she has a Pearl on her head? One more memory dive reveals that Rose Quartz and Pink Diamond were they same person.

Pick those jaws up off the floor folks, it gets crazier.

On top of being one of the CRAZIEST reveals in the history of Steven Universe, the ramifications of this secret, which Garnet and Amethyst also find out, are going to be HUGE, and I can only assume that the Gems are going to separated when they need to stick together most, something that was foreshadowed by Lapis’ second departure.

Furthermore, if we look at the duality of Pink Diamond and Rose Quartz, that she was willing to fake her own death to create her own path, her own personality and way of life, it all adds up. Rose’s fascination/borderline obsession with humans is that they were able to be whatever they wanted, they weren’t restricted to any one path in life, and more than anything she wanted that. She wanted her old life to end, she wanted to preserve human freedom, she… she wanted to be one herself, a choice she made by having Steven, a decision that brings Pearl grief in one of the many flashbacks – she helped her find freedom as Rose, so she cannot understand why their free life wasn’t enough.

And the fact that Pearl was Pink Diamond’s Pearl speaks volumes about their relationship. Pearls are dedicated servants, so of course she would be on board for her rebellion and her second life and faking her death. The dedication is mixed with feelings of love, but is that love just a form of that, essentially “built-in” dedication? There is so much to unpack here, this episode was an explosion of lore and secrets and dense character layers and my god this show is so brilliant.

And holy crap, this means Steven is a Diamond, what kind of effects is that going to have? How badly will this tear apart the gems? Did Greg know?! We’re going to have to wait till summer to find out, since SU‘s airing schedule loves to toy with my heart, apparently. Well, until then, thanks for reading my stumbling rambles about the greatest cartoon currently on TV. 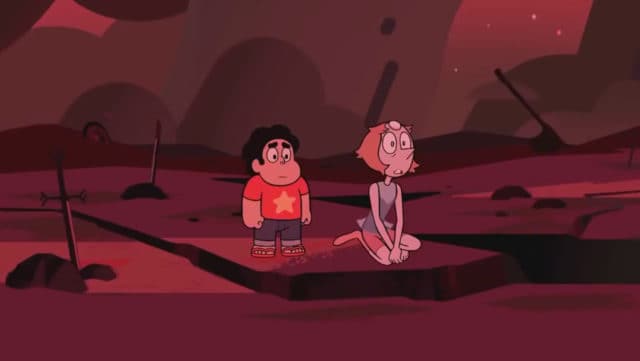 Pictured: an accurate depiction of my emotions